The Great Depression for African Americans. So where's our FDR?

"Black men were less likely to receive a call back or job offer than equally qualified white men," says a Princeton University sociologist. "Black men with a clean record fare no better than white men just released from prison."

It's tough to convince white people to open their ears and brains and shut their mouths with this Ellis Close-esque Rage of the Privileged Class stuff. Especially when they see Lebron, Beyonce, Lil Wayne and OchoCinco and Oprah, of course living well. Now, 20 years ago, during fact-finding on the Home Mortgage Disclosure Act and anti-redlining hearings (uh-oh, better cut down ACORN!), similar trends came to light, backing up what we already discussed around the dinner table: blue collar uneducated white couples where getting bank loans easier than professional, uppity blacks (must be our extravagant spending on cars and hair weaves?). In other words, banks were more likely to "work with" them folks. Even them folk with credit blemishes. That stuff's long buried. Reviled, even, by GOP zealots and a citizenry that still wants to blame everything on behavior, not structure, because that's easier to swallow.

The Washington Post has ressurrected this monster and put it on the front page. Uncaged, here it is: per the Bureau of Labor Statistics, joblessness for 16-to-24-year-old black men has reached Great Depression proportions, 34.5 percent in October, more than three times the rate for the general U.S. population, The Washington Post reports Young black women have an unemployment rate of 26.5 percent, while the rate for all 16-to-24-year-old women is 15.4 percent. If you've listened to NPR today, you see things are horrific for Latinos as well--the folk who supposedly will take jobs blacks won't. There's another myth, broken.
Of course there is a broader problem of under-employment, dependence on part-time or temp work. That's not counted in unemployment figures even for white males--our prize and solely competent demographic, correct? Feed that into the formula and the numbers are more frightening than "2012."
To paraphrase the Post's sources: For young blacks, race statistically appears to be a bigger factor in their unemployment than age, income or even education. Lower-income white teens were more likely to find work than upper-income black teens. Even blacks who graduate from college suffer from joblessness at twice the rate of their white peers. Some studies examining how employers review black and white job applicants suggest that discrimination may be at play.
Does this absolve the legions of young men we see loitering around, getting into trouble, bartering in an undeground or criminal economy that only discriminates against the weak, the unarmed, the upright and moral? No. But nor does it absolve the hypocritical, even nonsensical view--now even feeding stereotypes of others around the world (see the Chinese reaction to Obama and black folks)--that there are always bootstraps to pull up. And when even the best of us are sneered upon, feared, pushed aside for Joe the Plumber or (or a Sarah Palinesque lamebrain) then why should the least of us even try?
I don't hear our supposed FDR in this Great Depression Redux, Mr. Obama, even mulling over the answers to those questions, not to mention parsing brave and creative answers. Rather than battle these economic Grendels, Beowulf style, he's gone and created even more bugbears with the healthcare fight. People need jobs, hope, channel to work toward engineering a future...then when can talk about free/public or affordable and common sense health options. The Great Depression almost destroyed us. Then again, so did the end of Reconstruction. How many body blows can we take? Oh I forgot...it's supposed to make us stronger, less indolent, less violent, less bawdy and pumping out kids (but no birth control or abortions, please), fewer demands of civil rights special preferences, less "handouts." All that evil crap they say we demand. My bad. Then it's "Happy Days are Here Again." Nothing to fear but fear itself...
Read the article and hit Nat with comments.
Posted by Christopher Chambers at 4:18 PM 18 comments: 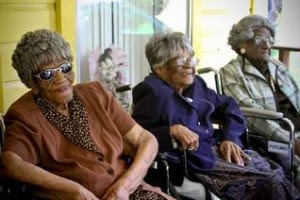 Unfortunately, this story has come to the fore owing to Guinness Book of World Records week (ending 11/13).
How many Americans know, or care? Check out the piece in The Grio here. Nat's grandma is 96 but that's nothing compared to these ladies--all of whom appear to have their wits (and wigs LOL) about them. Maggie Mae is 114; the baby sister is 103. Carrie Lee no doubt has "middle child" syndrome at 107. Imagine the things these women have seen. And endured. That's American History, talking to you.
Posted by Christopher Chambers at 12:54 PM 53 comments:

Washington in the 60s--required viewing...

...for anyone in this region. Narrated by Connie Chung (yes, Maury's in it too). On PBS WETA-TV.

Posted by Christopher Chambers at 4:41 PM No comments: