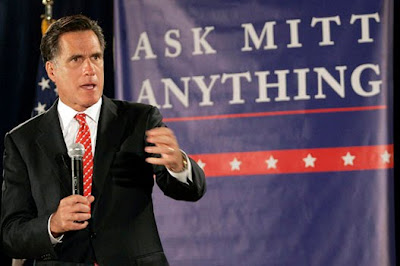 This week, singer John Legend repeated his aim to donate his Bush Tax Cut millionaire's windfall to help offset cuts in the arts, and help Americans--especially African Americans--who are unemployed and facing eviction or foreclosure. Contrast this with this week’s other news: former Massachusetts governor and possible 2012 presidential aspirant Mitt Romney penned an op-ed in The Boston Herald purporting to offer a blueprint for "more jobs."

Governor Romney titled this piece “Obama Misery Index Hits All-time High” -- as if it were a real piece of objective reporting. Trouble is, the op-ed, its title and its economic blueprint, are all smoke. The “Obama Misery Index” is a fairy tale, invented by, well, Mitt Romney. Meanwhile, real people are suffering.

The smoke does carries the piquant taste of Mitt Romney’s wealth-enhancing plan. That is, continued wealth for commercial and investment bankers, hedge fund managers, greedy CEOs seeking any finance vehicle to give them a short term jump, former derivatives pushers and their trickle-down remora...mortgage lenders. In other words, the folks who brought us the misery in the first place appear to be Romney's true constituents. No smoke there.
Concomitantly, fables like a “Misery Index” cloak such reality from average Americans, including the “Joe the Plumber” types who abandoned Romney in 2008 when he sought the Republican nomination against John McCain and who flock now to Tea Party activism (financed by the not-so-populist Koch Brothers).

Perhaps the only truth Romney engages in the op-ed is that the President “outsourced” the spadework of job-creating economic policy to former Senate Majority Leader Harry Reid (D. Nevada) and former House Speaker Nancy Pelosi (D. Ca.). Laying anything at Congress's doorstep invites pork and pandering, not policy. And indeed, I have long considered Barack Obama, like Jimmy Carter (target of the original “misery index” label in 1980, pinned by Ronald Reagan) a technocrat, a Spock, a wonk.

Yet from there, Mitt Romney’s "truth" becomes vapor.

Reduce ruinously high taxes on "employers," he says. Maybe with lower taxes, less regulation, jobs will return, even from overseas outsourcing? First, all, according to sources like the World Bank-IMF, the Tax Policy Center, Organization of Economic Cooperation & Development and our own Federal Reserve and U.S. Department of Commerce, American employers pay some the lowest, not highest payroll taxes (unemployment insurance, social security-related, etc.) in the industrialized world, and indeed nations with both higher payroll taxes on employers and taxes wealthy citizens now have:

Mitt Romney doesn't discuss those ironies, of course. Nor would he bother touching this: the Government Accountability Office (GAO) found that most U.S. and foreign corporations doing business in the U.S. pay almost no corporate income tax. This means that huge foreign corporations paid no federal income taxes measuring year 2005—before the Wall Street collapse— despite $372 billion in gross receipts. Most of the largest U.S. companies paid little or no federal income taxes despite $1.1 trillion in gross sales. Accordingly, when Mitt Romney claims that outsourcing jobs is a response to Obama’s “big government” and taxes on the rich, he’s fooling us. Coupled with this smokescreen is the fact that long before Barack Obama took office, the U.S. been effectively mortgaged itself to China, India, Europe and nations in the middle east; foreign governments and corporations now own trillions our foreign debt and assets.

Tea Party leaders and Republicans in general are still divided over giving Mitt Romney a pass for another blueprint—the very liberal 2005 Massachusetts healthcare reform package Romney himself created...and from which Barack Obama borrowed as a model for his own plan! Now Romney attacks "Obamacare" in the op-ed as contributing to “misery?” Frankly I thought it was a lack of affordable healthcare coverage that causes misery. Accordingly, is Mitt Romney embodying irony or hypocrisy in his op-ed? As with Wall Street, it would appear that Mitt Romney may consider patriotism is a virtue until it interferes with making money. But it's not merely the millionaire’s and Wall Street welfare system-- rejected by folk like John Legend—that's disturbing. What’s also nettlesome is Mitt Romney trying to hide the real reason's why he's invented a “Misery Index.”

In case you slept through the first part of this essay, I'll make it clear: he’s part of the misery. His personal net worth was $250 million when he surrendered the GOP nomination to John McCain—including holdings in foreign export credit corporations and bank stock. Of course, in the op-ed he trumpets his private sector experience in "creating jobs." That experience accrued mainly through his association with Bain & Co., an investment and venture capital business with tax-free fund holdings in Bermuda and the Cayman Islands, and has raided and bankrupted big companies like Staples and Kay Bee Toys. Jobs, pensions, health insurance—all gone.

Back in 2008 (after the Florida Republican primary), a black conservative friend (I will have to keep the name close to the vest) lamented Mitt Romney’s crash and burn. I chuckled and said that it had nothing to do with conservatives doubting his bona fides in favor of Mike Huckabee or vacuous rock stars like Fred Thompson or Rudy Giuilani. Rather, I mused, “Romney reminds people of ‘Lumberg’ in the movie Office Space. He’s a smarmy white boss who lays you off then takes his own golden parachute to do the same at some other place.”