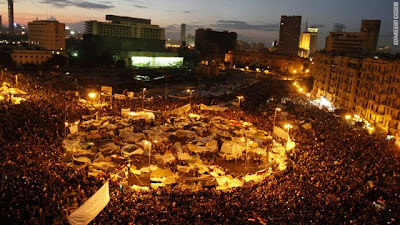 The Fox/rightwing blog propaganda apparatus decries the very notions they exhault when the "aggrieved" peoples yearning to be free are proper red state whitefolks: liberty & democracy.
We love to bathe in hypocrisy--and conveniently forget, either out of ignorance or a bootstrapping law of the jungle position that we can destroy democracy in the name of self defense. When you invoke the law of the jungle, do you whine in hypocrisy when it's then used against you?

Look, you either respect the right of the people in a sovereign country or captive colonies (like 13 of them in 1775) to shake off a dictatorship, or have the balls to say only we in America dictate what democracy is. How the Egyptians get there, well, we can help them, but in the end, that's on them. You take the good with the bad.

If I had a time machine I'd have killed off every member of the Continental Congress from south of the Mason Dixon (with a few exceptions) so as not to carry that taint into 1789...and thus 1861, and 1961, and now. But that can't happen, so even if there's the taint of some wingnut mullahs as part of this movement, so what? Again, that's on the Egyptian people, and no American president, or Israeli or Congressional blowhards, have the right to manipulate this or tell them otherwise.
Another southerner who I didn't like, Woodrow Wilson, did have the good idea of a notion called national self-determination. All I expect from Obama is that he will confirm that notion. Not liberty and democracy. Nope. Just the right to deal with my own house as I see fit. Even a Tea Partier ca. 2011 can get with that, right?
Posted by Christopher Chambers at 3:40 PM 263 comments: