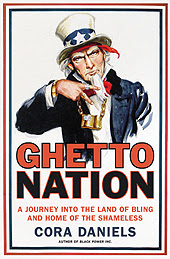 Some food for thought, as we battle the forces of Mordor (the GOP, Fox News, Anne Coulter). Hard to fight a war with an ablatross around your neck, and that albatross is this worship of all things ghetto.
Regard Ghettonation by Cora Daniels, author of Black Power, Inc.:

"We live in a society where shows like Pimp My Ride top cable ratings, babymama has become a family term, pimp and ho Halloween costumes are sold in toddler sizes on the internet, and even Martha Stewart proudly boasts to television viewers that she 'can get ghetto when she needs to.'"
So what is your opinion? Leave a comment. You know where I stand on this. The punishment of Mrs. Stalker Astronaut should be to pilot a shuttle into space, with a cargo of Curtis "Fiddy Cent" Jackson, Prof. Dyson (unless he stops this love of all things thug), half of College Park, GA and everyone in Diddy's family (I'll raise the twins). Not enough fuel for re-entry, of course. Just kidding...
More descriptions of the book:

With Ghettonation, acclaimed journalist and author, Cora Daniels, takes on
one of the most explosive issues in our country today in this thoughtful
critique of America's embrace of a ghetto persona that is demeaning to women,
devalues education, celebrates the worst African American stereotypes, and
contributes to the destruction of civil peace. Her investigation exposes the
central role of corporate America in exploiting the idea of ghettoness as a hip
cultural idiom, despite its disturbing ramifications, as a means of making
money. She showcases Black rappers raised in privileged families who have taken
on the ghetto persona and sold millions of albums, and not so Black celebrities
such as Paris Hilton, who have adopted ghetto attitudes and styles in pursuit of
attention and notoriety. She also gets personal, exploring her own relationship
to ghetto and the ways in which she is both part and outside the Ghettonation.

Posted by Christopher Chambers at 1:32 PM

Looks like something that will get her on the talk show circuit. It will be funny to see how the talk show hosts like Tavis respond, because you know they don't want to seem "elitist" and alienate folk!

I'm sure her press packet will be hitting our parent, so she'll be on this station and scaring my ghettofab peeps in O-town soon enough. ;)

Why the hiatus, Chris?

You better make in room in that spaceship for your folks in Baltimore!

Very clever, and I'm laughing out loud. But, yes, I'm really tired of all the pimp/ho stuff. Last year, Burger King had some advertisments that said, "Pimp My Whopper" on them. Just absolutely ridiculous.

thank you jesus
i'm so tired of the "more ghetto than thou" folks who think if it's not ghetto, it's not real
enough already...

thank you jesus
i'm so tired of the "more ghetto than thou" folks who think if it's not ghetto, it's not real
enough already...

Obviously I have no standing in this discussion, but what are your thoughts on the Joe Biden comments about Obama? It seems that our mutual hate objects O'Reilly, Limbaugh and that cartoonish amateur Glen Beck on cable got a lot of mileage out it, but from another angle. They interviewed black young people who were harassed or even beaten for being "too articulate."

I do not think enough attention is being paid to how ghetto culture has been positioned to be the literal definition of Black culture-perhaps it is an aspect of it. Southern "cracker" culture is not the definition of White culture-conversely why should Blacks share this burden? The problem is we are not getting a diversified image and this is occurring with Black and White collusion(not sure, just look at BET's Debra Lee and Viacom)....we have to start to get involved beyond critiquing...as Juan Williams has stated(in his book)....ENOUGH!!

I say this entirely without jest: thank god for the internet.

Seriously, its good to see some other positive Blacks that agree with my view towards this hyper-ghettoization that's occurring. Sometimes I feel like a stranger in a strange land amongst my people. We've got to start aiming high for the entire body crashes and burns.

Chris, my wife read Eisa Ulen's "Crystelle Mourning" upon your recommendation and she loved it. Looking forward to stuff like The Darker Mask (isn't Michael Gonzales of the Source a contributor? He posted a comment on this Post and I wanted to see if that's the same guy).

Now to this Post. I think "Snowman" makes a good point. I've seen Fox News hosts continiually mock Black History Month by bringing on guests who are the dumbest rappers, ignorant preachers and activists whom you would think were actors paid to be crazy on-air. Then they turn around and say black mock other black who are intelligent! Sometimes I think Fox, right wing radio hosts and these boneheaded bloggers have a contract with the more ignorant hip hop wing and other idiots!

I couldn't find the amazon link. Very interested in seeing what she has to say.

it's over. there's too much money to be made in being or pretending to be the ghettoest person in the world.

and who needs dignity and integrity when you can have a houses, Bentleys, planes and the adulation of thousands of other idiots.

Oh my goodness! I agree with "i am not star jones's" comment. It has become all about the money. Look at the fool Flava Flave and that crazy chick whose spin off show is now running on VH1 -- New York. Those two are getting ratings and getting paid to act like fools and flaunt so- called "ghetto" culture. This is what is played out in American households. Unfortunately folks are eating it up. It is all about the money. Over the past 10-15 years (since I have been out of college), Rap culture has been a big influence on society and so much of it has to do with being ghetto. Thank goodness we have rappers like Common who are talented but rap with positive messages and intelligent thought.

This book looks amazing, and addresses a huge issue in our society. The debate has to begin on how we can start to counter these negative and awful messages. I'll be looking for it as soon as it is available.