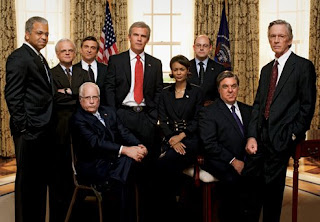 W ere it not for our Third Post-Reconstruction period in America (e.g. McCain-Palin campaign's vile march to the right, rather than the unified middle), these two flicks would've held a tad more impact. Mediocre, yet still important. Now, they seem quaint. Yes...quaint. Tugging us back to a time of the rotten Tootsie Pops, perhaps? 1992-2007 America. You know--flick the ants off and the candy shell's still sweet. The stick's white and not soggy so it must be right, right? But the Tootsie Roll center's been rancid since it left the factory.
"W": Freudian father issues. Nuff said. Oliver Stone has cooked, warmed over and diced into hash this tale in what--about five of his flicks now? It's got nothing to do with liberal vs. conservative, or destroying Bush's legacy or Hollywood snobs offending O'Reilley's America. It's plain Ollie working out his issues on us, which would offend anyone regardless of politics. Ultimately, however, the film proffers empathy...then sympathy. I liked it on that level. A cross between Hamlet and an SNL/MadTV skit.
"Secret Life of Bees" is based on Sue M 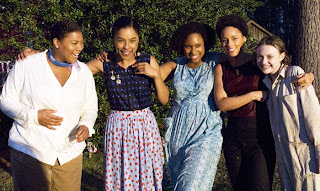 onk Kidd's paeon to post-racial sisterhood. Oprah's favorite novel. Of course, per my thesis, this was Oprah pre-Barack, as with Al Roker when he railed against Don Imus. Before the white housewife magic was gone. Director Gina Blythewood (who I met this summer) does the material proud. But make no mistake, this stuff is the next level of evolution vis. Donald Bogle's thesis of black woman as magical symbol/mammy/transformative benign necromancer/sassy sexual alter ego for a white female protagonist--and by implication white female audiences in middle America. The mamy stuff's been with us since "Gone With the Wind." Male counterpart: most Will Smith flicks from "Bagger Vance" to "Hancock." Indeed, the construct here is Black male as Peter Pan fantasy antithesis to The Color Purple's buffoons (Harpo) or brutes (Mister). There's pathos galore in the film. No banal reality, ugly reality. The film's set in the 60s when stuff expressed at Palin rallies or Southern wingnut churches was a daily occurence. And yet, womanly co-sanguinity and love conquers all. This is the old paradigm. Pre-Hillary vs. Obama. "Bees" is essentially a Lifetime movie on 'roids. Bring your box of tissues to collect your tears of angst and joy. And even Sarah Palin pre 2008 would have sniffled for a thick armed hug from Queen Latifah, right? The honey metaphor discussion at this point would be facile. Still, like W, it all seems quaint these days. Lifetime movie or not, conveying quaintness was neither the goal nor intent of Kidd or Bythewood. Ironic huh?
Too bad. We're coming to the gist, grist and graveman of my thesis. It stings us with why the DiCaprio-Crowe flick was a flop, as was "Miracle at St. Anna" (okay, Spike's style has something to do with that). It's why "Max Payne" and "Beverly Hills Chihuahua" rule the box office and "High School Musical 3" will rule them all. In our 2008 milieu of cognitive dissonance we retreat to ignorance...to things that tickle our base emotions. Ignorance is warm, safe. Mindless fear is energizing. In good times, calm times, even scary times like 9-11 mediocre flicks like W and Bees become pleasant distractions. But there's a difference between a distraction and pathological escape. Distraction, dear fanboys & girls, seems quaint these days...
Posted by Christopher Chambers at 11:18 PM

Chris
Saw W, this weekend...it was hilarious, especially the ending that I believe went over most moviegoers heads. Thandies Condi impressions were dead on, that damn scrowl!
The film kinda makes you feel sorry for the sonabitch Bush!

I saw SLOBees twice. Both times I'd say most of the audience was white but not by much. I think the marketing was changed to push black women ("go with your daughters, mothers, girlfriends") on black radio. I will grudgingly agree that the atmosphere is totally different now.

I agree with lincolnperry on 2 points
1.) Most people didn't get the ending. It was probably not wise of Stone to use a baseball metaphor.
2.) You DO kinda feel sorry for G Dub after watching the movie. The only problem is that you then realize his failure and short-comings were at the expense of many American lives.

What I don't agree with:
1.) humor. I think I laughed aloud once or twice. I know there were a couple of times that I was SUPPOSED to laugh, but Stone fucked it up.
2.) I TOTALLY disagree with you on Thandie Newton. I think she did a horrible job of immitating Rice. The scowl was bad, but the neck-twitching thing made it seem as if Rice was supposed to have Tourettes or something. Call it what you will, but I think its just proof that Hollywood needs to more times than not think about casting English actors for American roles.

I saw "W" just to see Thandie. I know, I know. That was a bad reason but it wasn't a bad movie. I saw "The Secret Life of Bees" last weekend at opening because I wanted to see Jennifer Hudson (she's marrying Punk!!!). I loved it. I think I see what you are saying, however. There is so much going on out there that they seem out of place. I don't even think the stank snowflakes on Fox News said anything about W. It's as if anything involving brain power has gone under the radar?

I read the Secret Life of Bees book a couple of years ago. I went to the film sipping on my usual gallon of hater juice, but surprisingly enjoyed it.

When friends ask what the movie is about, I like to say, "a bunch of black women who care for a little white girl." Of course it's more to it than that, but tell me that this description shouldn't be the beginning of any summary about the film. lol