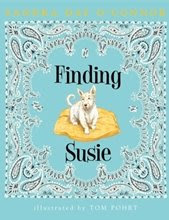 God help this country, given what the wingnuts on TV, blogs etc. have in store when Barack replaces David Souter. Souter was supposed to be a conservative...and then flipped the script. Sandy was a conservative without being a wingnut. Or a neocon in fake ass swadling clothes. Without being an Alito, or a Roberts, or a Clarence. (n.b. Scalia's in his own little Delta Quadrant of the galaxy so I don't lump him w/that crew). Thus, by measure of the new GOP, she was scum. And she knows that--and railed against it--click here. And suffered their ire. I wonder if she even voted for fellow Arizonan McCain? Probably...with a shrug.
She's also glad to be retired. Now she's penned a not half- bad children's book about an Arizona tomboy (Lonee Love said "that's what we called lesbians back in the day" hahaha Okay, Sandy's married) who finds a stray coyote pup and names it "Slim Pickens," and a little doggy named Susie. No mawkish bullcrap or cliches, seriously. It's a good book. And Finding Susie (Knopf, May, 2009) portrays a sweetness and narrative style I don't think can be duplicated by, say, Clarence Thomas...lol. Good job Madame Justice. Too bad you couldn't have stuck around...
Posted by Christopher Chambers at 4:58 PM

I've attended one of her speeches here in the District in front of the ABA and she would be the perfect person to rebut the nonsense brewing from her fellow Republicans. Sadly (for President Obama) she is now enjoying this author world and retirement. I think politics disgusts her.

SHE wrote a children's book?

I saw this in Borders and said "Is this the same person as on the Supreme Court?!" My daughter picked it out and looked it over but ultimately didn't think it was for her taste.