Nip/Tuck finale: it was a far, far better thing 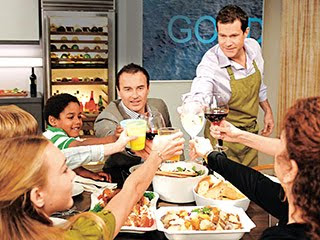 The image should clue or the flava on how the show--for six years alternately shocking, titillating, shark-jumping--ended.

I won't spoil it. However, as a fan of Charles Dickens I will say that Christian finally had his Sidney Carton in A Tale of Two Cities moment. No he didn't go to the guillotine for Sean, but in sacrificing, all went out happy. Matt the elfin, dumbass son, was, well, Matt. We got to see Wilbur again...once. Everything went to equilibrium, to the strains of Art Garfunkle's "I Love You."

I liked it. Look, given the lame or fanboyish finales of now versus yore, it wasn't bad. "Lost" is looking lame; and remember the "Sopranos" fiasco? The only satisfying finale I note recently was the amazing montage at the end of HBO's "Six Feet Under." Back in the day we had the last "M*A*S*H*," or the second "Newark" series merging with a wink and chuckle into the first.

Nip/Tuck does literally end with a wink--involving Christian, of course. It produced the grin, then chuckle, in me. Then it was 11pm and bedtime. No controversy or debate. No rush to Twitter or fan sites. No gossip over a Nip/Tuck movie or reunion. Just contentment. Equilibrium. Thanks, Ryan Murphy. Thanks for a cool run.
Posted by Christopher Chambers at 7:43 AM

I was certainly hoping for more. The last 5 episodes have been utter bore fests.

I guess I should be surprised that the finale almost put me to sleep.

While I LOVE the show in general, they probably could have ended last year on a stronger note.

Oh how I will miss the deliciously evil Christian, the confused yet saintly Sean, boring Julia, strong and feisty Liz, dumb misguided Matt, sleazy Kimber, and all of their poor children. When I first started watching this show, it was so refreshingly crazy and shocking, but made you feel sorry for certain characters. I have to agree with Nat that the show took on a "jump the shark" quality over the last two seasons, but by then I was already fully invested in seeing it through to the end. The ending was a let down, but as they say - the fat lady sang her last song. I would not mind if they did a movie, but the script would have to be REALLY good.

Hi Guys,Just registered here and looking to have a great time. I am looking for the best cash fiting program out there in the internet. Can you guide me?

The ending blew my mind, but I have to say I was waiting for another new season... something that obviously I never got. Now, I hope to see Charles Dickens in another TV show, because would be a shame he disappear at all.

While I LOVE the show in general, they probably could have ended last year on a stronger note.
messages on holdLOS ANGELES LIMOUSINE

Mercedes HIDPortable Vaporizers
I was already fully invested in seeing it through to the end. The ending was a let down, but as they say - the fat lady sang her last song. I would not mind if they did a movie, but the script would have to be REALLY good.

http://landvoicelearning.com/#38471 buy tramadol hydrochloride - tramadol for dogs how long does it take to work

oZzy moved away ever before, I miss his cock, that i'm always hungry for making love.
FUCK MY PUSSY!

Feel free to surf to my webpage hcg injections

I know this site offers quality dependent content and extra information, is
there any other web page which gives such things in quality?