I wanted to let you know more about the readings I attended for Mat Johnson and Obery Hendricks, as well as update you on The Darker Mask and the busy 2008 I will have. Naaaah. I am a pissed off individual right now. 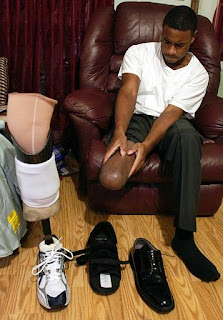 As a Silver Spring resident, I see dozens of young men with missing limbs, scooped-out skulls, burned flesh...all trying to get some fresh air and normalcy as they see their families, take in the sunshine. They've come to Walter Reed Army Hospital. Click on the words Walter Reed and wade in the filth of shame. An Army Secretary resigns in disgrace. The VA Secretary should, too. Cronies of Dubya. Yet now Dubya and his silly cypher Mr. Gates, the supposed anti-Rumsfeld (remember Rummie? Hell, he and Colin Powell need to join the Democrats for payback) want to "get to the bottom of this." Hmmm, sounds like Claude Rains' character in Casablanca when he rolls into Humphrey Bogart's joint sees the "illegal" roulette and poker then tuts: "I'm shocked...shocked that there's gambling in Casablanca!" If this had a been a Democratic Adminstration, Lord have mercy the hue and cry on the Hill and on Fox News and the douchebag blogs would drown out Britney Spears shrieks in electroshock therapy!

Back in 2005, when Dianne and I put up our friends and relatives at the Silver Spring Hilton during our wedding, we had a chance to talk to these young men. Many had relatives who stayed at the Hilton. With pained smiles the young men tried to maintain the facade of duty, honor...keeping the Army's and Dubya's line. (BTW And don't ya just love the way he ran down to Alabama to make sure those rednecks were OK after that tornado; New Orleans folks didn't rate,and still don't of course, but I'll let Field Negro field that horse manure move). Didn't take long to get the truth--about how they felt about the war now, and how it jived with why they enlisted in the first place. About these jackasses who lifted them to a pedestal for political purposes by these retarded War Hawks or cynical tools like Cheney. Now that they were damaged, no one cared but their families. Sounds a lot like these so-called Christians who want to elevate a fertilized egg--a zygote--to person status, prosecute a pregnant woman for not nuturing it yet cutting funds for maternal-fetal health (not to mention child care, CHIP program, and wow...VA benefits, military health care plan co-pays and coverage and stop-loss limits, but hey...). Of course once that zygote eventually pops out as a kid, it and it's mom are stone on their own. Amazing.

Boy--Sean Hannity, Ann Coulter, O'Reilley, every GOP talking point memo etc. told me that it's these "faggot Democrats" who were hurting gallant troops! Indeed they never show any coffins flown into Dover AFB--the largest morgue in the US well hidden if you're driving to the beach from Philly or Wilmington. Damn, could they be wrong? Hell, I found out they just did a shellack job with Obama and even whimpy Colmes on Fox managed to show that. My faith is shaken. Here I thought all these people were telling me the truth...I feel so used. ;-) For truth, I guess I'll just talk to one the faceless, armless kids in Borders, or Eggspectation or Panera down here in Silver Spring, Maryland. Maybe these other douchebags in the red states need to come here, too, sit by the fountain on Ellsworth Street. Watch. Listen. Be ashamed... 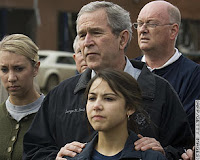 By the way, look at this clown in Alabama...has he come up Georgia Ave to Walter Reed to embrace disfigured teenagers languishing there? (oops that's right...he NEVER travels anywhere in DC or Maryland). Had he deigned to touch or comfort any of the black folks in New Orleans? Has he even seen the flag drapped coffins rolling into Dover in person? Nah...need to gel those citizens of Dumbfuckistan (sorry, I meant red state) into votes with caring photo ops. I guess Karl Rove saw The Queen and realized what had to be done.
Posted by Christopher Chambers at 12:36 AM

This is inflammatory but sadly on the mark, Christopher.

Thank you the write up on these books. Might I suggest "Six Frigates" by Ian Toll for your historical research.

Down there everyday at my office on Fenton Street. It's surreal. Good post and keep up the good work.

Damn boy--tell us how you really feel!

I thought Walter Reed Hospital was in DC, not Silver Spring? Are they right across the border?

In any event, you raise a lot of issues and I think folks need to think heavy on it rather than just on the usual Fox New Network bandwagon. What, you thought I was going to razz the preachers like you do? I would like to go to heaven, bruh.

Peace from the Fillmore, SanFran, baby...

your passion is justified... almost anything to bring attention to truth is justified these days...

what amazes me is that it has taken this long, and this many blunders - from the debacle in iraq to katrina to now walter reed - to convinve middle americans that the red regime has got to go. as an educator, and i hope this isn't too off-topic, i really can't completely blame our red state citizens for realizing this two terms too late. look at the attacks on free and open discourse in u.s. schools - from attacks on teaching evolution in elementary school to muzzles wrapped around the faces of university professors. there is a reason condervatives are going after our education system. an undereducated electorate helps them re-establish and solidify their violent power, dominance, and control.

how many gen x-ers really learned the greatest lessons to be gained from vietnam, or watergate, or iran-contra? how many know ben franklin said "a people who would sacrifice liberty for security deserve neither"? too few. this is why they can simply revoke our rights with the so-called patriot act. how can people think through the ways a butterfly in flapping in venezuela impacts life on main street when robertson is on tv calling for chavez's assasination and, as you stated so well, everyone not watching him wants to hear britney's first shriek?

we must get our citizens thinking, reading, talking about substantive ideas. otherwise, we have the worst case scenario: not just an undereducated citizenry - but an undereducation population that actually believes it is privileged.

Nat Turner would most certainly be proud of this post.

You let Dubya and his minions have it with both barrels. This present administration is an embarrasment and an abomination... with this Mess in Iran, the Scooter "Fall Guy" Libby Fiasco (where the heck are the friggin' indictments?), the Rotting Walter Reed Hospital, and Phase 2 of the White-izing of New Orleans in high gear ... we are living the WORST PRESIDENCY in U.S. history!

And we thought the Harding Administration was a bunch of screwballs!