Dispatches from the Culture War:
1.The Mitchell Report. Lawd. Is it only fatuous NASCAR dads, baseball nerds like Bob Costas and George Will and moronic right wing politicos who are whining about this steroid thing? Last I checked--and this is axiomatic--chicks dig the long ball (and the mean arm). As Colin Cowherd mused on ESPN radio, the sacrifice bunt and the baseball strike, plus greed, corporate consolidation, hedge funds and CEO pay and the new uber-hype culture brought this about, not immoral evil players. Baseball's not called "The Show" for nothing (pr 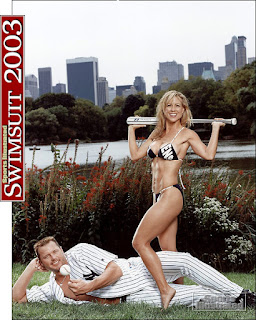 ops to "Bull Durham" for that). Yeah, it's show biz, no less than Dancing with the Stars. Great minds think alike, Colin. Meaning that if you're going to punish these ballplayers then punish MLB, Selig and his gang of douchebag owners, NBC and Fox and even the craven cities, like the District of Columbia, building ballparks and screwing local residents and contractors and neighborhoods and lowering bond ratings. Look, EVERYBODY cashed in on this, and it's telling that the real story here is that ordinary journeyman players and minor leaguers are heavy on the list. How else can a dude with a mortgage and low prospects feed his family in this age of coddled, annointed superstars (hey it's like that in the book biz, too, cuz!)? If somebody came to you and said if you take pill, you'll make 50% more money...and your boss'll be happy with the results, too, wink wink...please kiss my ass if even a Mormon player (as my boy Keith Olberman pointed out) would pop that badboy! Gimme a break. Baseball's more popular than ever and, like so many "culture" wedge issues you see hags like Ann Coulter hiss over on Fox, if you're looking to blame somebody, look in the mirror!
2.Christmas. Guess what, Bill O'Reilly and Glenn Beck: even my liberal-commie-crunchy granola friends 'round here in the Peoples Republic of Takoma Park, Maryland (but 6 miles from the Whit

e House, like the Red Army closing on on der Furherbunker in May, '45) wonder where the f**k has Christmas gone! Seriously, stop your usual red-baiting and lies to keep the redneck and soccer suburb idiots distracted! Again, last I checked, it was BIG everything: Food, Oil, Retail, Pharma just trying to make more bucks who've de-Christmasized Christmas. You can't even quietly blame the liberal Jewish media mogul conspiracy (of course not the "good" Jews in your book, like the neo-cons Ha!). Can't blame the Muslims, either. There aren't enough of them, and frankly they don't care--like the Chinese who keep the carry outs open Christmas Eve and Christmas Day (recall the movie A Christmas Story: "Deck the harls rif borrs of horry, far-ra-ra-ra-ra, ra-ra-ra-ra")
Frankly, I'm apalled that the Fox News brigade and fools like Beck and other facists have the balls to attack liberals for this when they know it's bullshit. OK...yeah...they do it all the time, but come on. Replace "Christmas" with the word "Holiday" is a marketing gimmick, plain and simple. You want to blame someone for shitting all over Linus's speech in A Charley Brown Christmas?" Again, look in the mirror. We are overweight consumer zombies to Wal-Mart, Citibank, Macy's, and 1000 calorie burritos at supposedly healthy Chipotle's (so much for immunizing them from suits on the basis of "free will"), etc etc etc and their institutional stockholders and their bloated CEOs. Sound familiar? See my paragraphs above on baseball. An illustration/analogy: whilst in Home Depot I asked a manager (based on an exchange I had with a sales associate who plainly had trouble with the Kings English) why the aisle descriptions were in English and Spanish. Was there an edict from the county human rights commission? A La Raza lawsuit? A boycott? "No," he said nonchalantly. "We just figure it'll bring more of them in, and make us more money." (emphasis added)
So keep your head down and watch the shrapnel. Spring training's four months away...oh and: Happy Holidays!!!

Posted by Christopher Chambers at 10:25 AM

As usual, you have made my Friday. Sound the bugle in the war, bruh!

1. Although I've enjoyed watching Roger Clemens pitch and I'm sad to see him tainted, he brought this upon himself and must now carry the shame. Same with the other culprits. The worst part is that within a few days many people will probably forget about this. Bud Selig looks good for ordering the commission, but it's the only good thing he's done as far as I'm concerned. He's a reactonary leader who has to be pushed into doing the right thing. For the longest time he acted as if nothing was going on. Then the 10-day suspension for first timers. 20- (or 40-) for second time. What bullshit is that? He needs to watch the IAAF and follow their lead: 4-years (BAM!). I love Marion Jones and have followed her running since she was in HS. It pained me immensely to find out she was cheating (even more so since I know she does have legit world class speed), but she did the crime. BAM, 4 years, return medals. Baseball isn't even close to doling out the proper punishment.

2. Your Linus reference pretty much sums up why I don't celebrate Christmas. Most have forgotten what Christmas is all about. Oh, that and my family's Muslim.

All I have to say is: Amen.

The Home Depot I frequent is the Brentwood one, and I have to say that I didnt notice any bilingual signage inside, but Ill check next time I go. Interesting managers comment, though.
L

I'm assuming you are tongue-in-cheek when you mention the "Jewish conspiracy?" If not then your comments are offensive and boneheaded.

Hey, you'll never see it unless I tell you to check the last comment to your 11/26 post, if it doesn't drop off as too stale first. I'm just catching up, and since you never email me anymore except to link to your blog -- which my co blocks at work. . . Did you see the DC sniper story on BET? It was really well done. One of the main interviewees -- Muhammad's (sis-in-law) lived in Clinton up the street from where I grew up. Muhammad was laying in wait outside her TH to blow her her sister's head off for taking his kid away. That was Ving Rhames narrating? Damn.

I think Spanish-language signs in Home Depot, Lowe's, all building supply houses, and retail bank branches make perfect sense. The people it helps get up early every day just in the chance they get hired to hammer a nail or trim a bush. They are building our houses, keeping our lawns pretty, wiring money, depositing what's left. All those little deposits add up, and my bank is doing everyting we can do get them, like all the other holders and issuers of CDOs and CMBS. The same people who bray about deporting them know how important they are to what's left of our economy. Home Depot and Lowes should be handing out free cafe con leche.