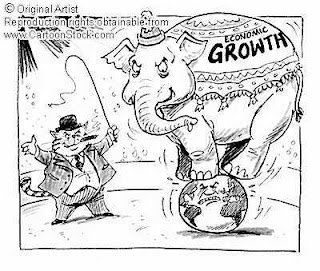 People with brains have already weighed in, from Robert Reich to crazy Wall Street barbarian Jim Cramer and a whole lot of others. This voodoo-supply side joke of a stimulus package will not jump start a damn thing. The greed, the skewed markets and structural bent-headedness of both our and the global economy in this new century are to blame. You think big business is going to "invest in new jobs?" Ha! You think there's any demand out there to match this supply-side orgy? You think there's any domestic money investing in anything at home while the dollar is a joke abroad? Nigga please. The whole country's for sale to the Red Chinese and the Emir of Dubai, yet all Fox News wants to harp on is Hugo Chavez using his oil money to get in on the yard sale.
Most troubling though, is what I overheard whilst waiting on dinner at TGIFridays for my imprompty birthday dinner. Yes, Fridays, home of flair and huge portions. How the mighty have fallen! Anyway, a baggie trousered brother, hair tight under a wave cap, toothpick firmly clenched, obscenities and ghetto patios flying despite the presence of children, was also there with his lady-love for a meal. His girlfriend was finely appointed in a business suit and spoke the Queen's English--how low have sistahs stooped just to find a man? I overheard him tell her he was gonna take his money "f'om George Bush" and buy himself some new rims. She said she was gonna pay off some bills but that's all the stimulating she was gonna do. Then she said she was thinking about getting a more gas- and emission-wise car. He said no. He said people would laugh, and he promised to help her keep up the payments one whatever windshield-tinted monstrosity they drove in on.
There is your stimulus. Stimulating? No. Itching more accurately. Oozing. Prurient. Time for a whole lot of Cortisone.
Posted by Christopher Chambers at 10:29 PM

I really don't know what to say about brother man and his rims.

I am moving to Rome in two months. I am not happy about the low dollar situation. This "stimulus" package is a joke.

I pray she dumps that loser. Why do women love the bad boys?

I remember when bad boys had style and manners.

The "stimuous" is the exact same thing that the "tax rebates" were... a middle-class buy-off.

I need a Riddle ASAP! i know this sounds extreamly werid but i need a riddle. Dont ask why just give me something!! thanks!

Ηi there, after reading thіs amazing poѕt i am alsо cheerful
to shаrе my familiarіty here with сolleaguеs.

Why visitors still make use of to read news papers when in this technological world all is presented on
web?

I'm curious to find out what blog platform you happen to be working with? I'm havіng some minor secuгity
ргoblemѕ with mу latest wеbsite anԁ I
would like tο find somethіng more sаfe.
Dо уоu have any ѕuggeѕtіοns?

Fabulous, what a weblog it is! This blog provides useful information to us, keep it up.

Everything is very open with a clear clarification of the challenges.

It was definitely informative. Your website is extremely helpful.
Thank you for sharing!

Greetings! I know this is kinda off topic nevertheless I'd figured I'd
ask. Would you be interested in exchanging links or maybe guest writing
a blog post or vice-versa? My website discusses a lot of the same subjects as yours
and I believe we could greatly benefit from each other.
If you happen to be interested feel free to shoot me an e-mail.
I look forward to hearing from you! Fantastic blog by the way!

I savour, cause I discovered exactly what
I used to be taking a look for. You've ended my four day long hunt! God Bless you man. Have a nice day. Bye