What James Fenimore Cooper taught me... 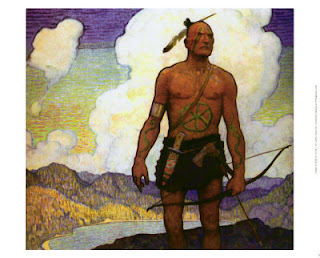 But by the way--I am not a "dumbass." I knew about the French and Indian War and I even knew that George Washington was General Braddock's assistant when he was younger. :-P

"What does Bob Johnson have? Return on investment, BobCats, 106th and Park, and Sheila's alimony. Please Bob--your arse-kissing of the Clintons is matched only by those of other "established" black politicos, Black Caucus members, pastors who haven't entirely been bought off or bamboozled by right wing Christian Republicans, assorted celebrities. They remora on a shark. They are like minor feudal barons taking handouts and glory from the King (and Queen). I could go on about how Bill (and Hill) weren't good for black folks, as many decree. Compared to daddy Bush or retarded Dubya or evil Dick Cheney? Yeah. But it's like comparing Hitler to Stalin. Who's worse? Who cares if the point of origin's different--the convergence is still the same: your ass."

I love it, bruh, as does the Nat Turner Insurgent Corps out here on the Left Coast, Oaktown Chapter.

you are on FIRE!
Brilliant.

Interesting points, Mr. Chambers. I disagree with much but not all of it but I understand your passion. I am a McCain man.

When I heard and saw Bob's comments I was floored. WTF?!

I'm not saying just because he is black he has to support Obama but Bob said was beyond ignorant. For him to launch an attack like that given how he earned his billions, proves to me he is a sellout.

I hope Obama wins big in South Carolina. HRC better think twice before playing the race card again. Then she had the nerve to say Obama was. I can see how they thought it was win-win. Scare the white people, and blacks would still vote for her in the general. However, this is not 1992 and Obama is not Sister Souljah. I have heard more than one person say if she is the nominee they will vote Republican or stay home.

Right on on the Sister Souljah comment. Lotsa folk forget about that particular Clintonism - I know I did. Thanks for reminding me, Ragazza.

We also have a conversation going on this topic on www.EisaUlen.com/blog. Please join in.

Chris - didja see the NY Times piece last Sunday that put this in a historical context?

The Stepfather of Soul said...

You may have seen the news story, but Bob Johnson sent a letter to Obama "apologizing" for the remarks he made while being "zealous" for Hillary. Your post is absolutely on-point and I join you in the disgust and disappointment you express.

I don't think it's wise to make voting decisions based on disgust, but when I saw Hillary Clinton on Tyra Banks I almost vomited.

Obama 08. Why can't our politicians get behind him?

I hate to paraphrase Clarence Thomas, but the CLintons are out there trying to pull a high tech lynching on OBama, in a very Karl Rovian manner, and many of our people are buying.

It's a damned shame.

PErsonally, I have voted for many people of different parties (although I have voted straight democrat since 1994), but to tell you the truth, I wouldn't vote for Hillary Clinton on a bet (and no, it isn't because of her gender).