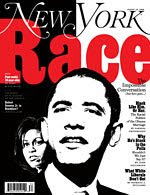 No, not The New Yorker. The prize for keeping non-brain candy journalism--and the writer's craft--alive goes to New York magazine. Of course it's the rag that gave Tom Wolfe his start, so I guess I shouldn't be shocked. Of course no ghettofab clowns or texting teenagers or NASCAR Dads or Wal Mart Moms have a clue about either, and that's part of the problem.
So bravo on the article among many in this issues fingering the one thing whitefolks--dumb or smart, liberal or conservative, hillbilly or Yalie don't want to acknowledge...that Barack isn't even farther ahead in the polls because he's spook. Ink spot. Spade. Jiggaboo. Colored guy. Period. Forget the "uppity" thing, forget the not ghetto enough stuff or mixed race stuff, forget the cute nonsense of texting VEEP choice to appeal to Gen X yuppies stuff. He's black. This is America. He's not a clay homunculus of some right wing white mad scientist. He's just black. Can you holla COGNITIVE DISSONANCE?! Oh and there's the piece on why the Beijing Olympics are the pinnacle of dumbed-down, insidious "reality TV,"--including the cloyingly terrible lack of piggybacked political or between the lines economic insights. Then there's my favorite quote from Al Roker: "I'm not a journalist, I'm a weatherman." And then he goes on to sorta/kinda paint Matt Lauer, tongue in cheek, as something less than Edward R. Murrow. Finally, there's a missive about the layoffs at Time, Inc. News bureaus, decimated. Yet subsidiary People spends $14 millions on the Brangelina Twins photos? The RIF'd real journalists, photographers, editors from flagship publication on down to specialty magazines like Fortune Small Business--you know, the folks who try so hard to keep us from all descending into Idiocracy--were not amused. If you want to be even more cynical, perhaps that cash could have helped with the severance. Recall what I said about ghettofab clowns, texting teens, NASCAR Dads and Wal Mart Moms? is their diet for crap the
Finally--and this is a severe digression having nothing to do with New York but tangential to journalism (hence it involves FOX News and Glenn Beck hahaha), I was amused by the painful ambivalence shown by these wingnuts regarding coverage of this insane Russian smack down of pro-western Georgia, and American Airlines charging returning troops hundreds of dollars in these bogus baggage fees (the latter story as metaphor for 1. the sick airline industry, 2. the failure of pro-biz almost criminal laissez-faire regulatory posture of Bush-Cheneyism and 3. big business in general). Schizophrenia isn't fun, is it Roger Ailes, Glenn? I mean not badmouthing our so-called ally Vlad Putin, and eight years of nausea-inducing Administration foreign policy versus aggression and a spit in the eye at the West even worse than anything Iran has done. Or soft-pedaling anything American big business does versus our sacred, iconic troops. Oh the sores. Oh the hypocrisy. Stuff even the ghettofab clowns, texting teens, Wal Mart Moms and NASCAR dads could discern. But you shucked and jived enough to keep us confused. Thank God you aren't New York magazine. Brain candy journalism & idiot America, saved...
Posted by Christopher Chambers at 10:20 AM

I'm confused by the chicken/egg syllogism here. Are you saying that "ghettofab clowns, texting teens, Wal Mart Moms and NASCAR Dads" are demanding vapid stuff from journalists, or is the media feeding us stupidity and avoiding hard debates, this making us stupid? It's easy to say a little of both (which you imply), but I don't think that's the case. i think we're demanding "brain candy" and that's what they are providing. If important issues are ignored, or people laid off at magazines or TV news stations, that's tragic but apparently it's what America wants.

I looked up cognative dissonance online. You had me stumped with that one.

You are a disgrace, using those words used so hatefully on our people!

I think the author was using the epithets as satire and for effect. (why should I even explain this? some of your readers are really knuckleheads or knee jerk)

Thanks for the post. You are always there to get the pot stirred for me.

To call someone out while posting anonymously is an act of cowardice.

Chris, I agree with the black issue. Without a doubt, race is a factor here. One sad effect is that there are many people in this country who like or dislike him based on his politics and not race. But they're going to be painted in a negative light because of the true racists.

$14M for those pics? Are you fucking kidding me?

Paul Craig Roberts concludes: “The US is not a superpower. It is a bankrupt farce run by imbeciles who were installed by stolen elections arranged by Karl Rove and Diebold. It is a laughing stock, that ignorantly affronts and attempts to bully an enormous country equipped with tens of thousands of nuclear weapons” (CounterPunch). Shocking when one reflects that Paul Craig Roberts was a prominent Reaganite!

Paul Craig Roberts, was Assistant Secretary of the Treasury in the Reagan administration.

1.Revenge for the troops charged $$ for their bags(or something scary for the rest of us): American Airlines is fined $7 million for safety violations.

2.Fox now says Bush talks tough on Russia. Um...right. These ofays are the same people who label Barack a neophyte and unreliable. Look at the world they built!

3.I see fuckery afoot at the DNC. Hillary is going to set Barack up. This isn't a unity move.

Whites aren't the only ones dodging the race issue; Der Spiegel notes that Jesse Jackson Jr. dodged it in a CNN interview

Whites are dodging it, though, although I would note I've been talking about it from the start (Ask the folks who've been "shocked" to hear me say I'm afraid some cracker will blow him away.).

As for the "news," I left journalism a quarter-century ago because I saw it was becoming nothing but a drivel-fest. And I went into law?