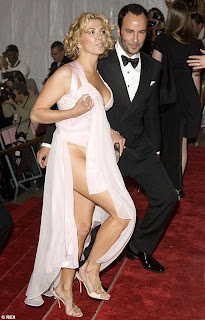 Ron Silver was one of my favorite "sort of" bad guy character actor. His range was better portrayed in the theatre rather than onscreen or TV. Life imitated art during his run as political evil turd "Bruno Gianelli" on The West Wing; by 2005 he, like Bruno, made the transformation from stereotypical "New York Jew liberal" (as they say in what's left of the Red States) to GOP wingnut pundit on similarly reverse-evolved Roger Simon's Pajamas Media. Irony. But that was Ron. He played the sinister dude who could become your devoted friend, or the straight talker who ends up f***ing you in the ass. Irony as a life & professional yardstick. RIP Ron. I'm glad the lights on Broadway dimmed in his honor tonight (amid the St. Paddys' green glow from tourist drinkers at McSorley's, unfortunately).
Natasha Richardson is the daughter of Vanessa Redgrave. The Redgraves (Vanessa, Lynn, their father and his before that) are one of the most amazing theatrical/film acting families in history. Natasha is among the better actresses on either side of the Pond. She had a skiing accident in Canada...she was on a gentle beginner's slope yet got jacked up. No details. Someone decided to fly her to NYC. Sounds crazy. Severe brain damage and she's flown to NYC? WTF?! She may be brain-dead and NYC was the best place for the family to fly in and say good bye? This woman is class act...despite the photo! (her husband, now by her bedside, is actor Liam Neeson) Hard to find in this bullshit mess of Seth Rogen and Blake Lively types that is Hollywood...
Posted by Christopher Chambers at 9:42 PM

I had no idea about Natasha Richardson. Very confusing.

Yes I saw on E! that this might be a move to pull the plug on her. This is so sad.

I hear you on Ron Silver. Remember that move he did with Jamie Lee Curtis?? He was frightening. I had heard he'd become a commentator and Republican blogger who'd get nasty. Why did this happen?

I felt Rons characters were a reflection of himself, especially the con man he played in the billionaires boy club, and the GOP wingnut in Timecop!

Obviously I'm not privy as to why Natasha Richardson's family didn't fly to her but I wish them well going forward.

Skiing, flying, sailing and horses are rich folks hobbies that can definitely led to tragedy.

As for Ron Silver, the population of Hollywood post 9/11 Republicans has been halved. I hope someone checks up with Dennis Miller soon.

Chris
Whats up with this bullshit mess of Seth Rogen and Jason Segel, Paul Rudd, Blake Lively types that is Hollywood...overated B Movie actors, to believe they can pass off Seth as the next Green Hornet!

These white boys like Quentin Tarrentio grew up watching black exploitation films, and rehashing the stylish noir in these stupid sophomoric efforts.

However Superbad was funny!

Thanks Chris about Natasha. My prayers are with her and her family. She comes from an amazing family. Also, thanks for stopping by my blog and commenting on my post that referenced The Secret Life of Bees. Peace, Ananda

.
God bless Natasha, and Ron Silver, he was a 'Liberal' who came to his senses about Jihadis and brutal Dictators. He knew they would destroy America, and Hollywood if they could. He realized that if America goes down the tubes, then the whole planet is doomed.

You were great Ron! Time Cop, Arrival, Wiseguy, and The West Wing among many were particularly good. Thank you for everything, especially your courage, RIP.
.
here's an absurd thought -
our God of the Universe
hates ALL Liberals

who admit their errors
and move Right on defense

.
absurd thought -
God of the Universe hates
the principles of FREEDOM

.
absurd thought -
God of the Universe says
YOU'RE RIGHT WING