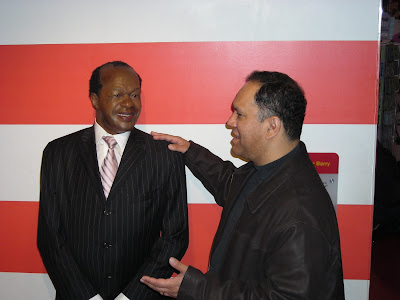 "I am a great mayor; I am an upstanding Christian man; I am an intelligent man; I am a deeply educated man; I am a humble man." -- M. Barry, Mayor of Washington, DC
That's the most benign of quotes in a lexicon of craziness. I spared you those of the "He dead...what do it matter?" vein. In any event, Nat is asking hizzoner what the f**k is up with his federal and DC taxes. Nat is the King of 1099s, and thus I am always under the leer of the stern, Sam the Eagle from the Muppet Show eye of the IRS, Maryland and the District tax centurions.
Check out the details listed in the story by "Loose Lips," political wonk for the Washington City paper. N.B. LL=Mike Debonis; there have been more LLs since the 90s than there have been comic book Green Lanterns (from Hal Jordan to the brother, John Stewart). Marion's been prosecuted for tax evasion, yet not even been tapped with a wage garnish? Professes no assets tho seems to find time and money to zoom to Jamai

ca with his "troubled" son Christopher (troubled is the nicest word I can use) whilst campaign staffers await their checks? This is serious stuff, and clearly no conspiracy by Mr. Charlie. And of course, he's been re-elected to the DC Council over and over and over.
His take? He deserves reelection. He like many of his generation are utterly unrepentent for the old school "l'etat et moi...apres moi, le deluge" brand of black politics, of Sharpe James and Coleman Young, and Congressmen like Gus Savage, Bill Jefferson in La., of "Du" Burns in Baltimore, indeed to great extent of Harold Washington and Wilson Goode. One step forward, six back. And yet there are an awful lot of bammas and ghettofab folk who pine for the good ole days. Why?
Or...put it this way--has anything really changed? What's the difference between Coleman Young and Kwame Kilpatrick (da hip hop mayor)? Don't our new crop of goo-goo (Good Government, term from the Progressive Era) light-skin-ded mayors like Adrian Fenty, or Corey Booker, have a cadre of disciples, cronies? Pet developers and business contacts? Are the women any better--Sharon Pratt Kelly in DC after one of Marion's downfalls? Sheila Dixon in Baltimore, under indictment? And of course, there's Roland Burris...
These aren't rhetorical questions. I want to know. There's a school We seem to be shifting, rather than demolishing old paradigms and establishing new ones. That's Paul Krugman's basic problem with Barack & Co. boiled down, I suppose.
My view on Barry isn't subject to any more questions, however. He needs to be removed from the DC Council, from all public life. Put in a figurative museum. There, safe behind the velvet ropes and glass, he can be either worshiped or despised. But on display nonetheless, whence he can do no more harm...
Posted by Christopher Chambers at 5:14 PM

He was humble man before he became mayor.

The problem with these so-called black mayors is that black people demand nothing of them except that they show up at public and social events. Whites that have run the cities since the beginning of time are happy to support self-serving, do-nothings like the Kilpatricks and the Sheila Dixons.

The only way to get strong, uncompromising, black leadership, is for someone to get elected that puts the interest of the people, black people, the masses of people in any urban area, ahead of their own interest, ahead of the controlling class' interest. Unless one is independently wealthy, and just by sheer DNA, an uncompromised, do-gooder, visionary, leader, this will remain impossible.

Status quo office holders will not tolerate the emergence of such an individual. The "people" are too detached, and, themselves, compromised, to know it when they see it.

For instance, in Baltimore, a few years ago, their was such a political btight, shining, star, on the horizon. A state delegate, Jill carter, was elected some years back. She has stood up for the people that need help consistenly. To do so, she has had to challenge the positions of many high-ranking elected officials. The result, the establishment politicians have been doing everything in their power to destroy her credibility and her popularity. Many of the very people she has taken hits for have turned against her....grassroots groups like ACORN, the NAACP, the minority contractors, community activists, have been bought off and turned away from her while she has been left fighting their battles alone. Carter ran for mayor and got no support from any of these factions. The media belittled her and public perception sank from viewing her as a Baltimore's barack Obama to a Dennis Kucinitch or a Cynthia Mckinney.

The message and the lesson is: the people, black people, will continue to get what they demand and deserve. Until they become uncompromising, they will remain unable to recognize or appreciate that in a mayor or other leader.

So, cities will continue to have these sub-par, idiot, self-serving, embarrassing, mayors, like Kilpatrick and Sheila Dixon. These types are even worse that the Marion Barry's. They are owned, 100 percent, by the white establishment.

DC granted him a sweetheart deal re: the taxes. The feds aren't so inclined.
Funny thing that Fenty was supposed to be the anti-Barry, and yet permits this kind of thing.

Hathor, I think the quote was to show what kind of idiot this man is. "I'm so great, yet I'm a humble man."

Allen,
I was speaking of what I knew of the man, long before he became mayor, as a civil rights activist. Even after he became mayor he had a coherent philosophy(around the time he had been shot)although I didn't know what kind of politician he was. It sadden me, to see his lust for power change his values.

I disagree on Adrian Fenty and Corey Booker (your light-skinded Mayors). They did establish new paradigms in leadership, priorities, and the nature of the city leaders and even employees. Contracting also was reformed and I don't think you can even compare the two in terms of "sweetheart" deals and cronyism, Nat.
There's so much in different thrusts to the government and relating to young people.
So there is your difference from "old school" Nat.

I'm not being revisionist on the Mayor-- and by the way that is a funny pic of you with "him"--but I think the bottom line is (1) he's and icon and (2) other than some funky ish with his trust fund and other slush funds held by his old dawgs, he's BROKE. The IRS is barely getting a trickle of blood from this turnip so there's little left for D.C. gov.

Now, that's a separate issue as to whether he should be a seated official. Like Blagojevich he was elected. They love him in his district, as you know more than me. About the only thing you can do is strip him of some of his legislative duties (i.e. it would be silly to put him on some tax oversight committee hahaha) but that's it.