Screed on the Tea Parties 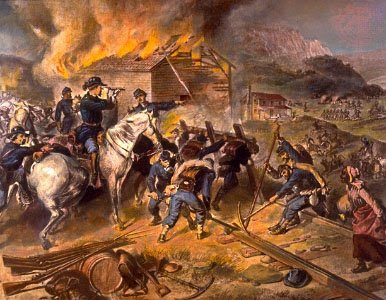 George Santayana’s storied saying about forgetting the past has been cliché-ized in our pop and pablum culture. You know what I mean. Kids who can memorize presidents and British monarchs are featured on the Today Show, yet kids who can tell you about these presidents & kings/queens’ policies, their strand in this spider web of history—no, they’re boring nerds. What George meant was you don’t look at the past robotically, nor do you robotically respond. But you must be vigilant.

So I come to these “Tea Parties.” Let's drill down and look at the facts: it’s certain these aren’t “grassroots” events nor are they righteous expressions of freedom. Concurrently, it’s axiomatic that the average fool who follows this stuff hungrily wouldn't believe you if you had carved-in-granite proof it's a scam. Now let's look to the past we're always condemned to repeat. Back in the day the average yeoman, the average poor clown neither understood or cared what or who was behind the curtain, Oz-like, in 1860, when another fellow from Illinois became president and somebody’s world was rocked. Or in 1866-1876—Reconstruction. Or in the 1880s and 90s, when the Populist and Grange Movements, true grassroots movements designed to help these very whitefolk, fell apart thanks to race baiting by the authors of the same rebellion which reared in, well, 1860. Full circle.
.
The South got its way on the direction of this nation from 1800 to Lincoln’s election. There was no mention of state’s rights, or Texas governor Rick Perry’s redneck drawl of a pledge to his “base” about a state’s primacy under the 10th Amendment just last week. Not when you control the federal government. They made sure we were kept as pets, even overriding local laws to do so, or leading the charge out West. Fomenting war with Mexico. Then comes 1860, and all that patriotism evaporates. Ft. Sumter. Bloody war with these same type of clowns who drool at Rush or Glenn or believe this Tea Party is real, as cannon and rifled-musket fodder on fields, along creeks or up wooded hills from Pennsylvania to the Virginia Tidewater to the Mississippi. Fomenting race riots in the North as well. Even creating terrorist weapons of mass destruction, targeting Washington, Philadelphia, New York. Murdering black soldiers who truly were fighting for freedom.
Then came the ultimate act of terrorism as the proponents of the Stars and Bars, whipped up into a psychotic trance, murders OUR President (and wounds other government officials) 150 years ago this month in their own personal “tea party.” Accident of timing? What would George say?
But they were heroes to many folk. Fighting tryanny. As were the “Bourbons” and Redeemers who destroyed Reconstruction. In 1915 D.W. Griffith released the wildly popular “Birth of a Nation” (aka The Klansman), showing presumptive, usurping mulattoes in charge. Hmmm. Dark skinned blacks preening and picking at themselves like apes, or attacking white women. Swallowing up good American virtues like self reliance and piety, replacing them with collectivism, “wealth transfer.” Even for poor whites. But the only fate for these miscreants is death and torture and re-subjugation. And all is well…
Yet we, too, forgot the past. Forget valor, the sacrifice, and laud the coarse, the flashy, the ignorant, the loud. Sad. Despite this a black man, his black wife, his corn-rowed beautiful daughters, moves in the same President’s mansion that freed slaves refused to help marauding British soldiers and marines burn in 1814 because America was their home, too. All is not well. The world’s turned upside down and rather than adapt, find common ground, compromise—even create workable alternatives, we have venom and destruction. We have assault weapon sales ballooning. Tim McVeigh, who killed more Americans (and children) than anyone else until Mohammad Atta & crew, could have blended in easily. Meanwhile the hypocritical lies continued. No one wanted to stop the de facto stimulus packages in Red State land: farm subsidies, construction pork, grant money for crony businesses, military bases and the military itself as employer of last resort, funding for online diploma mills for this built-in constituency( but let's cut their health care, protection from predatory lending, etc.).
So it's time for us, too, to remember.
Time to respond as only these folk understand. Which is why I posted that artwork of ole William T. Sherman. He knew how to treat these folk, even during Reconstruction. Sadly, it was the yeoman whitefolk who took the brunt of his fury. But the authors of the rebellion suffered horribly as well. I wonder what he’d say…or better yet, do… to Sean Hannity or Michelle Malkin? (big smile).
Then again, after the Civil War, he also tried to exterminate the Plains Indians. But that’s why we study the past: to spot where to cut off the allegory... (big sigh)
Posted by Christopher Chambers at 10:58 AM

Heh. Note the sister in the corner of the painting shouting as if to say "Gwon with your bad self, Sherman! Stick your Yankee boot right up some Cracker a$$!)

Nice essay. All opinion, no substance, but I likes!!

Catharsis done. So let's get back to the real world.

Some of these cats need a good swift kick in the butt to either change their ways or get them the heck out of the way with their gun/bible clinging!

Tisk Tisk Nat. What kind of linkages are you insinuating?? Don't you know these are all good people, being patriotic?? Ha!

Maybe we should start acting like your namesake for if you study History indeed you'll know that it was him who made white people of all castes frightened for different reasons. I too am afraid that there are NRA-armed John Wilkes Booths out there. That man who blew up people at an abortion clinic in Alabama was HIDDEN by rednecks recall.

First, as a white Southerner I know it is next to impossible to plumb our psyches. Carson McCullers, Nell Harper Lee and William Faulkner tried but did succeed. We are as complex as the forces that made us through the centuries but there are some fundamental themes on which you touched ably in a few paragraphs. I realize your blog post isn't really about Southerners specifically but you are using a snapshot, however there ar motivations in these Tea Parties and among the propagandists who fuel them which are old and ugly and sadly familiar to me in my 62 years of growing up in Mobile, and archiving in my mind the stories of my family and my husband's.
Second, I too fear the extremists on both sides but it seems my neighbors are indeed more dangerous. The guns, as with the "big government" theme, is a mere ploy or straw man. The guns are means not an ends.
Third, thank you for at least closing on the moral ambiguity of Sherman. I understand but do not agree with your worship of him on the Civil War level, but there is no excuse for what he did to Native Americans as an author of this policy.
Finally our worst acts of terrorism aside from 9-11 have all come from white males in the current stripe of Tea footsoldiers or more extreme elements. From the Booth conspirators to McVeigh. Yet the right wing coddles them and spreads lies as cover (onto the president, or "ACORN") rather than disavowing them. This cows moderate women like Susan Collins. From my time at Dept of Interior I can show you reference books on Confederate plots to use poison gas and fires on Northern Cities, and to whip up anti black hysteria as with the Draft Riots in NY in 1863.
Best,
Anna Frizell (using my real name because it is time to stand up and be counted)

You said: "Time to respond as only these folk understand. Which is why I posted that artwork of ole William T. Sherman. He knew how to treat these folk, even during Reconstruction."

Why not just go ahead and give your army the marching orders, Nat. You have already determined there is just cause.

Shame on the violence you propagate.

"... neither age nor sex was to be spared.."
"...there was a little infant sleeping in a cradle, that was forgotten, until we had left the house and gone some distance, when Henry and Will returned and killed it..."
Those are the words of Nat Turner in his confession, if believable.

Of the 55 people killed by Nat and his men in 1831, 13 were men, 14 women, and the remaining 28 were young(mostly children). Ten of those 28 were in school. These were not casualties of war. They were intentional murders of the innocent.

Hurray for your hero, sir.

Yep, screw you a-holes. And hooray for Nat now and then.

I went to one of these Parties in Va. to see who and what were there. Old sourpusses snarling about Obama-Osama and young rednecks though not THAT young toting rifles. Nice.

Nat then Nat Now, still my hero...thanks for the history lesson.
There was a tea party at the Georgia State Capitol, reminiscence of the pre-election klan/white citizen council McCain/Palin rallies!

My additional two cents, where were these folks when Bushie and company pissed away eight years of my hard earned tax dollars for two wars!

Deocliciano Okssipin Vieira, aka Ochyming said...
This comment has been removed by the author.
5:36 AM

I thought it was the gravitational force dance of the two main vision of USA that make yr country stand apart.

Professor I think you wrote a lot here, but really didn't have much to say... I think that pontificating without getting to a a point is pointless…

That said: Here is a thought I hope you'll ponder - Nat rails against all things ghetto and claim it's time for "folks" to get it together by their own initiative and on their own effort to get themselves back on the right track so as to make something worthwhile of their lives and communities. How is that message ANY different from other folks whether rich or poor saying the same thing?

I don't care who started this Tea Party message but if the message has merit I’m all for it. When the message says it's time to stop deluding ourselves that more taxes and government are the cure for all that ills us it resonates with me and many other folks. And please don’t fool yourself - We are not all in that elite 5-10% class of people who pay the most and get the least from our government.

Hey you’re a history major and legal scholar: Wasn't our government supposed to act to protect us both from a tannery by the majority and from a minority??? Well in my view government has failed miserably at being able to do either so this is one your decidedly middle class folks that is glad to say that it's about time some one is trying to set us strait!!!

Thank you for sharing valuable information. Nice post. I enjoyed reading this post. The whole blog is very nice found some good stuff and good information here Thanks..