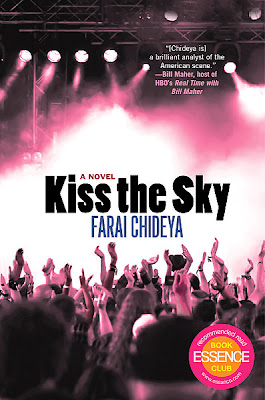 Now comes the Autumn of our (or your) discontent, so get ready. Here are two Labor Day backyard/beach reads which shall help gird your loins...

First is reporter/columnist/commentator and former NPR host Farai Chideya's debut novel, Kiss the Sky. Buy it here. The plain vanilla: This is Farai's semi-(...quasi-?) autobiographical reflection on the music scene of the early 1990s. From the death of 80s pop to the transition pangs of Hip-Hop from Bronx party music to something meaner yet money-making. Sophie is Farai. Raised in Bo'mo'City...Bawlermer--Baltimore for you uninitiated. And Sophie's family is the embodiment of the prosaic clan limited not only by the hood but by their own myopia. There's nothing beyond Greenmount Avenue. Certainly not Harvard. Or the recording studios, clubs and label offices of LA and Manhattan, or Harlem's new black bohos, or London, or Tokyo, or Paris and a video channel that's BET and MTV combined (for better or worse circa 1995 or thereabouts). This world as alien to S 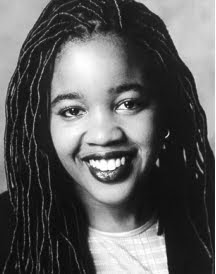 ophie's genesis as Farai's NPR is to Glenn Beck. Sophie must navigate this void between the worlds, literally and figuratively. But that's not the whole story...

...that's the plain vanilla. Here's the flava: Yes, Sophie is metaphor for Farai. Yet the story is allegory for universal cultural truths we in or at the edges of her generation have lived. Beautiful and fulfilling on both counts; excruciating, exasperating on both counts. Being a journalist also means being a storyteller. Thus the story is grounded in Farai's experience--and not just memories, but lessons learned from other people, events. Kiss the Sky shows just how cosanguine real life and well-crafted fiction can be. It's all about how the outside affects our insides. We're Sophie, too.

This stuff is in the same genus, and perhaps same species, with Martha Southgate and Lise Funderberg. Or Eisa Ulen Richarson, Tina Mclroy Ansa, Arminatta Forna, Marita Golden. Or Cleage and Files, Tademy and McFadden. Not quite romance, or church-set aspirational drama. Not black chick lit (and you know I love to get the inside scoop on black chick lit!). It's nowhere near ghetto or ghetto-ish melodrama or BDUSSY romp. I'll go out on a limb and say these women and those in close or near orbit who I haven't named for lack of space, not respect are continuing a paradigm set a long time ago in both Western and non-Western prose and poetry. As for the former, I take you back to Dickinson, Austen, the Brontes. Boring English class crap? No. Frilly dead white chicks? No. Like Farai, these women wrote about the outsides affecting our insides. That's what makes it classic.
Posted by Christopher Chambers at 11:01 AM

I have this book and have NOT read it. Yes it is on the lineup for end of summer. Labor Day is not that far away! Where did the summer go?

to me it was the perfect new york, black rock soap opera. in other words, i dug it, man.

You had me till "BDUSSY"! lol

I haven't heard that term in a LONG time!

You will bankrupt me with book purchases. My coworker has this so I will try to get her copy!!

Okay despite BDUSSY I'm making the reco' to my bookclub. They usually go for the genres me and my crew in the club HATE but this might make the transition easier, hopefully.

Got it for my daughter!

Come on Chris--have you been preempted by your writer girlfriends? This book SUCKED. Self-indulgent, self-pitying "look how cool I am going from my little world to MTV and being famous blather." It is an insider's book for an insider audience. The average chick reading it on the bus is not going to connect. I bet she got a book deal based on the insider thing. She should stick to writing a Gwen Ifill sort of book, not chick lit. This is chick lit.

Oh please, anonymous! This was a great first novel!

LOL I stand by my review!