Jesse and Louis at Murdered Kid's Funeral: Problem or Solution 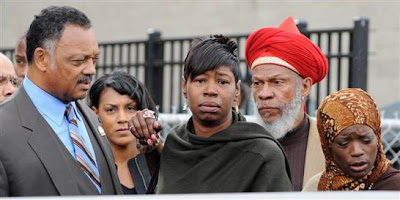 Per the AP: CHICAGO - The funeral of a Chicago teen who was beaten to death on his way home from school drew civil rights leader the Rev. Jesse Jackson and Nation of Islam Minister Louis Farrakhan on Saturday, both calling for an end to youth violence.
OK--how? Where? When? Derrion Albert's savage beating was splashed on Youtube and every TV show from Today to Glenn Beck (for different reasons). Bestselling young poet/author R. Dwayne Betts, himself a ex con, asked at a book festival in Washington, DC: "Did anyone think to jump out the car and help that kid instead of filming a video?"
Jesse and old Louis posturing? Perhaps--nothing real was offered, other than asking what in the hell the city did with the stimulus $$$ aimed at reconstruction in these communities. But that's but one percent of the problem. That's a start. However, the other 99%--the culture and attitudes in these communities.--how do we address that? You've heard it before: "If you don't want to be treated like an animal, stop acting like one."
Thoughts?
Posted by Christopher Chambers at 11:11 AM

If all they are going to do is run their lips-then it was all for show. There's a definite need for a different approach to this problem.

Either the people of the community are going to finally wake up and realize that they are seeing the result of being enslaved by their apathy or we might as well get ready for the next victim to be added to an already too long list.

i doubt either jesse or louis had much else to do that afternoon. the didn't create the PROBLEM and i cannot doubt the veracity of their desire to be a part of the SOLUTION. but neither of them have the where-with-all to put together a plan that would begin to cure our ravaged communities of their ills.

jesse & louis are two toothless lions of the civil rights movement whose only victories these days are photo-ops with grieving families and a regular bowel movement. i can only hope there was sufficient time to complete the former activity before the urge to execute the latter activity!

Louis has done more than most. Many a black man has found the straight and narrow under him. Truth be told, no has an answer to this issue.

Off topic, but i owe you:

Guess you already read it, tho.
It is one of yr. fav topics, eh.

Both have already stated the obvious. It's up to the citizens to take action.

The sad part is that Obama jumped into the fray sending Holder and Duncan out there. Obama is a fraud. He represented the state. He once worked in Altgeld Gardens. Arne ran the schools there. They did nothing to stop the violence when they were there. Don't expect anything now.

Rarely do cultural shifts happen. A bad culture just doesn't turn on a dime. Black people have been going down a slippery slope for the last 3-4 decades. Sadly, we have much further down to go.

Jesse and Louis are free men to come and go as they please, the fought isn't within them, but instead it is poor parenting, urban rot, and the community that remains too tolerant of such atrocities.

Even if they spoke the right words, you can lead a horse to water but you can't make them drink......