R. Dwayne Betts: it's from stories like this we feel good about Obama's Nobel Prize 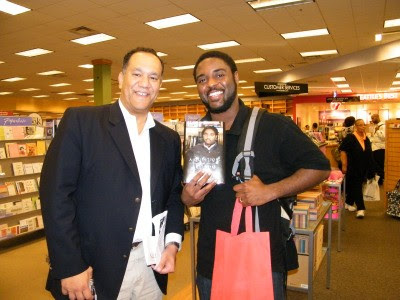 R. Dwayne Betts is an award winning poet, scholar, commencement speaker at his 2008 graduation from the University of Maryland, mentor, writing fellow at the Broadleaf Writers Conference in Vermont. Dad. Husband. Profiled in USA Today, on CNN and in The Atlantic. Advocate for incarcerated juveniles. Now author of a memoir. He's also an ex-con, having spent nine years in prison for armed carjacking. He was sixteen going on seventeen when he was arrested.
I had the pleasure of appearing with him at the Capital Bookfest; I had the honor of doing a colloquy with him on the main stage. His memoir, A Question of Freedom, offers no excuses for what he did nor does he wrap himself in his "improvement" and "growth" and "change" and other such "prison to new man" trope. His lyrical voice sings of endurance, possibility and ocean-like motion: ebbs followed by surges. There are no couplets on brutality. As for prison itself there's one chapter with no verbs, adverbs or adjectives. Just names. Men and boys with which he served time. Many are still in prison. They just exist. No motion.
It's refreshing to see he doesn't fall into the almost self-congratulatory, self-centered parable some critics have assigned to writers like Chris Gardner in The Pursuit of Happyness. This isn't a "work hard, don't be angry at the white man and you'll succeed" lesson. Nor is this "raw street pain, then triumph." It's a life story, truly--where everything is connected yet unexpected. Like the dingy copy of Dudley Randall's iconic Black Poets which found it's way into his prison cell by chance. And the rest is history.
Of course the Nobel committee will likely ever hear of Betts or his work. But this spirit of possibility is why the President won an Peace Prize. Indeed, what flavors Betts' poetry and A Question of Freedom isn't what he's overcome or where he is now. All are paeons to possibility...
Posted by Christopher Chambers at 8:55 PM

I'd seen this guy on CNN over the summer and was waiting for your review. Will be doing any more books or just poetry? Doesn't he also teach in Maryland?

We got a good seat for the event. I think you all were more positive and helpful than Tim Reid's thing. Daphne Maxwell Reid looked a lot older but he looked and spoke the same. I am glad they got him off the stage to sign books in order to get you all up there. I was very happy tp get Dwayne's book and hope there will be more.

Fuck you and fuck "Hussien" Obama and his "peace" prize. You will be put back in your places come 2012, thanx

Must be a "birther" or Nat Turner's Tea Party friends LOL

Nice Day For A Lynching

I should be forever killing and be killed.

This is beautiful, Chris.

Research arrives next when you have a subject to start with. Now make listing of exactly where you require references the most. Pick out the tenderest places from your papers that want the most support. Do a lot of using of your brain and try out to appear up with much more and a lot more authentic suggestions. As procustomwriting papers are undertaken by thousands and thousands of college students every 12 months, the rate of similarity in approaches is typical. For getting much better commends and popularity by means of your papers; the want to find new facets of your own is necessary. The instructors too are gotten bored of same topic and same methods of detailing. You novel ideas could provide to be as breathe of new air for them.