The Best Word on Harry Reid 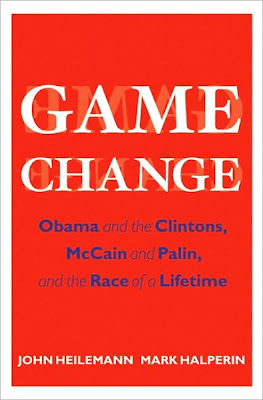 Game Change is a crazy book. I think Heilemann (whom I've spoken to personally) and Halperin are the Harriet Beecher Stowe of today's Civil War (the opposing forces seem to be the same--right down to the migration to the politics and culture of Reconstruction). Indeed I told Heilemann if he showed up at the White House, Obama would greet him the same way Abe Lincoln spoke to Stowe in 1861: "So you're the little [lady] who helped cause this big mess."

In case you were waiting on my comments on Harry Reid, I couldn't do it any more justice than Ta-Nehisi Coates, resident pundit for The Atlantic. I'm not so arrogant as to say great minds think alike. No, it's that this is a no brainer, and common sense dictates convergence...like coming to the conclusion simultaneously and independently that ketchup and maggots aren't good toppings for vanilla ice cream. So, here it is:

John Cornyn and Michael Steele [on Fox News, of course] think that Harry Reid's comments are the same as Trent Lott's

"In 2002, Democrats expressed outrage at Senator Lott and called on him to step
down as leader. That same standard should be applied to Senator Reid and his
embarrassing and racially insensitive statements; statements, I would add, that
Senator Reid still has yet to clarify," Cornyn said in a written
statement. As we await his explanation, Senator Reid should do the right
thing, follow the example that he himself set in 2002, and step down as majority
leader."

I think you can grant that, in this era, the term "Negro dialect" is racially insensitive and embarrassing. That said, the fair-mind listener understands the argument--Barack Obama's complexion and his ability to code-switch is an asset. You can quibble about the "light skin" part, but forget running for president, code-switching is the standard M.O. for any African American with middle class aspirations.

But there's no such defense for Trent Lott. Lott celebrated apartheid Mississippi's support of Strom Thurmond, and then said that had Thurmond won, "we wouldn't have had all these problems over all these years.'' Strom Thurmond run for president, specifically because he opposed Harry Truman's efforts at integration. This is not mere conjecture--nearly half of Thurmond's platform was dedicated to preserving segregation. The Dixiecrat slogan was "Segregation Forever!" (Exclamation point, theirs.) Trent Lott's wasn't forced to resign because he said something "racially insensitive." He was forced to resign because he offered tacit endorsement of white supremacy--frequently.

Claiming that Harry Reid's comments are the same, is like claiming that referring to Jews as "Hebrews" is the same as endorsing Nazism. Whereas a reputable portion of black people still use the term Negro without a hint of irony, no black person thinks the guy yelling "Segregation Forever!" would have cured us of "all these problems."

Leaving aside political cynicism, this entire affair proves that the GOP is not simply still infected with the vestiges of white supremacy and racism, but is neither aware of the infection, nor understands the disease. Listening to Liz Cheney explain why Harry Reid's comments were racist, was like listening to me give lessons on the finer points of the comma splice. This a party, rightly or wrongly, regarded by significant portions of the country as a haven for racists. They aren't simply having a hard time re-branding, they don't actually understand how and why they got the tag.

These guys are lost. But Michael Steele's "off the hook" strategy will, presumably, point the way back. Not for nothing, I offer the wise and venerable words of my people: Negro, please.
Posted by Christopher Chambers at 9:43 PM

Thank you! It's as obvious as not putting the stuff on the ice cream. So why don't white people, Republicans see it? WELL>>>> he put is finger right on it.

This is a superior article as they all are. I tease been wondering about this looking for some beat now. Its gigantic to receive this info. You are fair and balanced.

Genial dispatch and this enter helped me alot in my college assignement. Thank you for your information.

This is a titanic article as they all are. I tease been wondering nearly this for some culture now. Its vast to grow this info. You are reasonable and balanced.

Easily I to but I contemplate the post should have more info then it has.