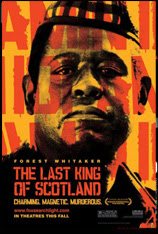 I know there will be cultural conspiracy theories about Forrest's win. Fits the usual mode: like Denzel in "Training Day," a black man has to play a sociopath to win an award.

I noted a different trend. Along with Forrest, you saw a whole bunch of ordinary, if not chunky or downright ugly or old folks winning. Think about it--these people are the antithesis of the artificial, eating-disordered, silicon, tabloid Hollywood. Jennifer Hudson, Hugh Laurie (who's one of the ugliest white men around), Helen Mirren, Meryl Streep (both old chicks), America Ferrera...even Sacha Baron Cohen (who's a bizarre looking dude; Borat single handedly affirmed that the mass of racist dumbfuck goobers or arrogant tools are indeed in the Red States or Bush enclaves up here among we normal people). Regarding our people, it was good to see even the usual annoying suspects like Prince, Jamie Foxx, Will Smith, Beyonce, et al. reasonably out of the limelight.

So, I'm celebrating for the triumph of regular folks. We'll be back to Brittany and Paris and Jessica and Donald Trump soon enough. Now I have to get the DVD of Last King of Scotland and see Forrest scare people far more than the back of Ving Rhames' head...
Posted by Christopher Chambers at 1:40 AM

Hey, I may have to examine your bank accounts secretly!!!

But, wha was he saying in this acceptance speech? I didn't understand anything until his last comment about ancestors.