The Last Word on Imus... 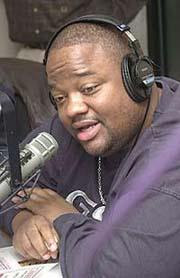 ...from the Big Man himself, Jason Whitlock. Basically, we as black folks have to take responsibility for the ghetto/prison/stripper culture crap we allow our own people to put out there, unchallenged. Think I'm crazy? Check any Fox News show (Hannity, O'Reilley, etc.) or right wing blog or any conservative blowhard like Glenn Beck or my favorite dope fiend, Rush Limbaugh, and do you see the paeons to capitalism that you should see? E.g., GM, Procter & Gamble, Amex (g'head Ken!) got Imus off MSNBC, not Jesse, Al et al. Nope. You see these smarmy preppies (I've been dealing with boys like this my whole life) down at Duke, and endless references to folk like Snoop, Young Jeezy, even Diddy and Jay-Z, plus the crazy chick who accused the lacrosse players in the first place. Nevermind that the Rutgers young ladies are NOT Ron Artest, "Pacman" or Tank Johnson. Might as well be, as these are the type of athletes we laud. Check Jason's column and either rave or rage. One thing, if this matter got Al Roker back his black card (you should have seen the hate email he got from white people who thought they had him pegged as jolly and safe), then you know this was serious...

For lighter fare, be sure to pick up a copy of Jerry Rodriguez's new novel (see April 10 Post) and check out the trailer he filmed featuring actor Paul Calderon as Nick Esperanza. I'll be following up with views and reviews of new stuff by LA Banks, Trisha Thomas, Lori Byrant Woolridge and the new book trailer by Jonathan Luckett. Plus some ticklers on Nat Turner's own projects.

Check back after Tax Time, fanboys and girls...
Posted by Christopher Chambers at 10:20 AM

I read the column as usual he overstates so much. That is probably because he is a sportswriter. However I have always been impressed with the way he backs up his positions. He is not a conservative/Uncle Tom and surely has never been, like Larry Elder. He hits us with "tough love" and tries to get people to think. Indeed I have heard these views expressed by thoughtful black commentators all week, and even Jesse admitted to to this last night. I think this presents a great opportunity.

Thank you for the post and advise my bookclub when you will be in Cleveland/Shaker Heights area. I promise it will be warmer!

I'm leaving the "anonymous" comment as a reminder to us all of the idiots on the other side. If I were to go on some right wing crazy blog and laugh abiut at the Duke lacrosse preppies, the blogger would go into a mouth-frothing frenzy...

This is a good word and hopefully the last word. The terrible end to this has been the injury to the governor of NJ on his way to a Rutgers Univ. meeting with Imus.

Yep, my man Jason has pretty much declared himself a member of the house team.

Ignore anonymous, he is typical of the other side.

I disagree. Jason Whitlock talks sense and I think a lot of folks are too invested in self-defense to listen.

What new books by L.A. Banks? "Scarface?" Trisha Thomas is back?! Is she touring in the Bay Area?