Thanks a lot, brother...

As if brothers don't have enough to answer for. 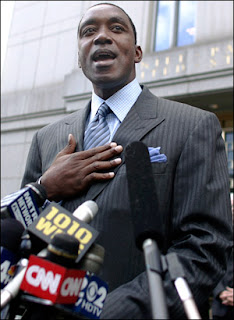 Yes, answer for. We've been hiding behind this "woe is me, the Man's marked me for genocide and sisters diss us" crap. Oh yeah, folks what us hung and flayed like a prize elk. But have we been stepping up? Of course. Millions of us. But millions more emulate clowns like Isiah. Or Diddy for Godssakes. Or rappers and athletes and others who literally either buy into or get paid by the gatekeepers of this white ethos that we are dumb brutes, loud slicksters. Carnal beasts. Urban thugs. Dirty ol' Fred Sanfords. Cheating, snarky smarmy Buppies. Wave-cap headed bammas. "Money Over Bitches." That is what's portrayed because that is what we reflect back to these people, rather than bust the mirror.

So Madison Square Garden's going to have to pay MILLIONS for Isiah's nonsense. My boy Steve Mills, a Princeton brother, should have reined this little bastard in. I hope the Knicks fire Isiah. Yeah I know this sounds like the get Vick rant, but folks, we need another body on the pyre to show all of our men to stop the bullshit. Mr. Charlie can get away with it. We can't, we shouldn't. Games must end. There's no reason why Halle Berry, crazy as she is, shouldn't be having a beautiful African American baby rather than the spawn of her pet white prettyboy who "understands" her. For too many brothers, "understanding" our women, our mates, means "let's have a Christ-centered life," or "let's have a crack centered life." Jesus or crack, we need some sort of external force to help us focus and relate. I don't need Jesus to do that. I don't need drugs or macho or some vampire preacher or some made up mumbo jumbo from a Motherland that treats women worse than America does. I need a shared spirit with my black woman. That comes from inside.

The reverse, the other side, can be truly scary. While the vast majority of couples consisting of brothers with non-black females (or males, hey) are based on mutuality, love, respect. You have some fools who still like to avid sisters based on the notion that white women won't sweat you. Or that sisters are cruel and demanding or are golddigging tricks. Hmmm. Many white women will dump you in a nanosecond for reasons ranging from banal and ridiculous to deep seated fear. And yeah, many of them are crazy, too. Look at Clarence Thomas's spouse. She is a right wing lunatic who likely edited the manuscript of his already insane memoir. She was especially hard on Professor Anita Hill, who's done nothing but call Clarence the liar he is. Read between the lines. Stay away from my sick-head blackman, you black women! Well, we may come to a point when sisters say: "Go ahead and have his lame, crazy ass!" They may be nuts themselves, but sisters have hung in there despite our immaturity and public clowning. How long, though. How long? Don't give aid and comfort to the enemy, brothers.

So Steve--pay that women her damage award and cut Isiah loose. Please...
Posted by Christopher Chambers at 5:46 PM

Bravo Chambers!!
I agree that our black men need to do better. Money, position and prestige should not give one an excuse to act like a crazy pwrson and expect to not pay the consequences. However, I also think that this should be applied to all men, Chris. There are plenty of good ones out there (I happen to be married to a good man). Sure Isaiah got what he deserved, but there are plenty of white men who committ shameless acts and need to be accountable as well.

You are freakin' HARD on the brothers! Points well taken, but daaaaaamn!

I had heard that Clarence Thomas's wife was some conservative attorney with the Heritage Foundation. I guess if slavery's reinstated (as most white folks think it was no big deal) she can claim Clarence.

Kweisi Mfume, Bill Cosby, Jesse Jackson, Kobe Bryant, and the list grows. I swear, if Obama gets caught with his hand in any cookie jars, I'll scream. Every time one of them does some stupid shit, it gives the smug, mainstream bigots one more reason to look at each other and nod in agreement - "See? They can't handle opportunity, so why do we even bother letting them rise out of the ghetto?"

"I need a shared spirit with my black woman. That comes from inside."

That is deep for you. I am scared now!

Thomas' attorney should have pimp slapped him for even considering that "its ok for a Black man to call a Black woman a bitch" defense. How did he think that was going to fly??

Honestly, I didint think that the sentancing for this case would have been this harsh either.

FYI, on the local NBC channel yesterday, their "ticker tape" showed Princeton as "#1." For what I have no idea, but I just wanted to let you know!
lol

Chris,
You have courage to say the things that you do. I adore you.
A Fan

Thanks for the comment on my blog.
Please come again.