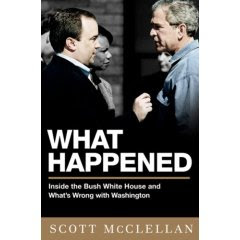 It's refreshing to see former true believers shit all over the fanatics, creeps and trivial fools they served. Makes for great books, films, etc. Publishers love them. Not even any need for sex in the manuscript. Hell, if 40% of it is true and the punditry is talking and the objects of the derision are squawking (note Karl Rove whining on Hannity & Colmes on the Goebbels Network...er...I mean Fox) and you have a best seller going into the summer "reading season." This book by former White House Press Secretary and favorite son of the University of Texas Longhorns Scott McClellan isn't just about Iraq, or Valerie Plame/Scooter Libby--it even dishes the dirt on Bush and Hurricane Katrina. Bravo publishing industry for enriching us, so. We who are about to die, salute you...
But seriously, tell all Ides of March stuff from former White House Press Secretaries are rare. They usually fall into three categories: true academic pieces/behind the scenes reconterie regarding historical events and personalities--think JFK's man Pierre Salinger. Amusing anecdotes and "hey--I didn't know THAT" books"--think Ford's boy Ron Nessen, and utter self-aggrandizing "hey I'm important...I know a lot...and the old boss still loves me even though we disagree on a few things" crap--yep, think Dee Dee Meyers. All sell well. But this kind of stuff? If it wasn't so creepy, then Rove wouldn't be on TV and the White House wouldn't be dismissing Bush's favorite Texas golden boy as a "disgruntled employee." Well, it's disgruntled employees, ex-spouses and bitter children or grandchildren who make the best damn whistleblowers.
Is it the Ides of March? Not quite as earth-shattering, but it does give plenty-plenty currency to everyone outside of Fox News viewers and pundits, 70% of GOP elected officials (excluding, interestingly McCain) and all the cartoonish wingnut bloggers out there. And you know, it's always been a rational argument that Caesar had it coming...
Posted by Christopher Chambers at 1:11 PM

People are allowed to change their minds, and he is allowed to tell the truth without being attacked.

But how come a BUNCH of CRASSpeople brought a country to its KNEES and NO ONE, no one's accountable for?

If BUSH wasn't the leader of the so called FREE world, wouldn't he be in a room in Haia drinking coffee?

This guy's hearing it from both ends. The liberals are like "so what? Why didn't you stand up before."

So is Condi, which is sick in an of itself. Rove is a scumbag, but she seems genuinely deluded.