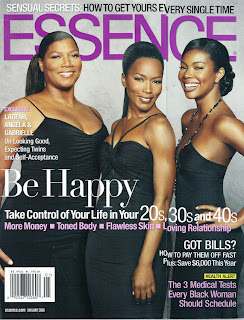 What does John McCain and Jill Scott and finding a good black man have in common? Essence. My, has the world changed. I tell my right wing friends all the time--McCain is going to break your hearts. I'm sure they

know this, but hey, they'll never admit it. Why not? When Hillary's cracking about RFK and saying she's gotta hang in there b/c who knows, somebody might take Barack out...and other Democrats like Ferraro claiming a vast nigger conspiracy in the media by the NABJ--and we all know blacks are overwhelmingly represented in print, TV newsrooms (chuckle)--no one should be shocked that McCain's in Essence. Yes, we, not Jews, control the media...didn't you hear? Yet many folks are shocked McCain's in there. And he's saying nice things about about Obama and Ted Kennedy. Lawdy. Check out the interview (click the Essence link above). Not bad. Makes you even think about voting for him, huh?
Posted by Christopher Chambers at 12:11 AM

I'll check out the interview.

re: Hillary..I don't even know what to say. This is the second time she has said something like this. First time back in March. I hope Ted Kennedy curses her out. And Robert Kennedy Jr. endorsed her. What does he think about this, or Rangel?

He seemed harmless.That's the danger.

At least he did the interview.

I'm going to check out the article as well. McCain wouldn't be so bad if it weren't for his stance on Iraq. I think he has a very good shot at the Presidency because he's more towards center than many Republicans. Conservatives do not like the guy, they just dislike Hillary and Barack more.

McCain in a Landslide, you smug holier than now niggers! Go cry somewhere else and try to avoid shooting us

Commonsense? Eh! Well give me Liberty or Give my Death and hopefully this Liberty will help grant you an education because everyone knows that dropping the n-bomb is only the escape route for insecurity! Go Obama! Have a nice day!