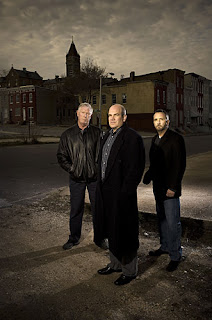 That's Ed Burns, Dave Simon and bestselling mystery author (and neighbor of Me & Mrs Nat's) George P. Pelecanos . They write-produce-direct HBO's The Wire. Probably the best show on TV, ever. And not many people watched because it was too "real." Uh huh. When you poll members in focus groups--especially in places like Concord NC or Davenport, Iowa--that's the response you get, interestingly. Not that it's "alien" or "too black/ethnic" or "too East Coast" or "bleak" or "obscene." Nah. Too real. America in the Dubya Years--thanks.
Not too long ago in Time, Ed (a former tough street cop turned public school teacher turned Hollywood producer), David (a former Baltimore Sun reporter and editor who quit when the stories lost depth and were replaced with fluff by vapid, cost-cutting owners, now a MAJOR Hollywood producer) and George (one of the best "hard boiled" detective writers of all time and chronicler of the "other" D.C. beyond the monuments and K Street and embassy parties) presented their view of this so-called War on Drugs. They were joined by bestselling authors Richard Price (Lush Life, Clockers) and Dennis Lehane (Mystic River). My one regret--and trust me this IS a BIG issue--was that the new-school marquis African American authors were too busy writing about oral sex with the pastor, or strippers marrying a reformed pimp, thugs who must come to terms with their thuggery, to be a part of this in a meaningful way. Indeed, we produce "House of Payne" and "Norbit;" they do "The Wire." Something ain't right, and that's our cross to tote in this matter.
But I digress.This silly, draining war actually rivals the War on Terror in its destructiveness, collateral damage, horror, toll on governments, the cops, communities. Americans. No candidate is talking about it. Everyone wants to be "tough on crime." Hell, even recently a Bush Admin. official shilled on herself on NPR, declaraing "Yes, demand for drugs is one important element in this problem." Huh? Hey White Lady: it is THE element. The only element, really. Why do people get high? Ask Rush Limbaugh. Because they're weak? Stupid? Oh, no...
Here I link one modest proposal from the Time piece. Your thoughts? Rail if you will. OK, but how's the current course working for ya? And if if you're white and insulated from gas prices etc. I'd still ask the question. Poison is eveywhere, and I mean the effects of the drugs, the policies--not the drugs themselves.
Posted by Christopher Chambers at 8:24 AM

They had scriptwriters of color in Seasons One and Three, but I agree we needed to take the lead on this. However, look who controls the production money. If Tyler Perry comes to them, they will only give him money for some nonsense. If he wants to do something gritty and realistic, they would likely admonish him.

People have to start asking why taking or selling some drugs criminal. You can be a mean, falling down drunk, your competence isn't any better, but you are never criminal in that state. It is only if you commit a crime.
This has been a boondoggle for the FEDs and a wind fall for those small rebels and large bankers.

It would be too much for the laissez-faire folks, but we could have probably rescued as many people with the money spent on the war on drugs as it took to incarcerate them.

Tyler feels he does address the drug issue and other social ills in his movies. You cannot compare Tyler's writing with Richard Price, etc.

Fact: Our Stories, black owned...their mandate? comedies only. Why can't they do a gritty movie ala DIRTY PRETTY THINGS? They don't want to. Studio execs (black and white) tell me all the time non-comedic black movies don't make money. AMERICAN GANGSTER or any movie starring Will Smith of course is not a "black movie." It's frustrating.

Fact: Our Stories, black owned...their mandate? comedies only. Why can't they do a gritty movie ala DIRTY PRETTY THINGS? They don't want to. Studio execs (black and white) tell me all the time non-comedic black movies don't make money. AMERICAN GANGSTER or any movie starring Will Smith of course is not a "black movie." It's frustrating.

Ahh, this is frustrating. Non-comedic black movie producers/writers/directors need to perhaps not look to making the big bucks then. Go indie. Get that critical acclaim. Has there been any exception to this in the past? What of Eve's Bayou? It was non-comedic, indie, and Black produced, no? (at least directed) And didn't it do well financially? Are there 'any' examples that would lay waste to this very frustrating fact? :)

great post folk we all ned to get motivated

I've just downloaded iStripper, so I can have the sexiest virtual strippers on my desktop.