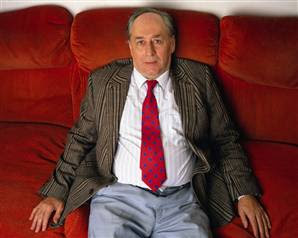 Sounds esoteric as hell but one of my favorite memories of my late mother is our spending a rainy afternoon watching Steven Spielberg's adaptation of Ballard's novel "Empire of the Sun," on HBO a couple of years ago. My father was napping, of course. My then fiancee was back in DC hanging with her Howard girlfriends. I'd just come for a visit basically. In her unrepentent Brooklyn accent she said, "Christapha, woo-tch this movie with me. It's based oo-wn a book, right?" Yep. The film featured a little boy actor named Christian Bale, who was 11 when principal photography begain. This was "serious" Speilberg: "Schindler's List," "The Color Purple," & "Amistad" vintage. And semi-autobiographical: like Bale's character, Ballard was a Brit colonial (though older in real life) captured by the Japanese in the morass and tragically unknown World War Two front that was China and interned till after the atomic bomb ended the war. A few weeks after we saw the movie I got my mom Ballard's novel; she took it to Delaware for her beach reading but never got to it. As of this past season it's still there sandwiched between her old Ludlum tomes. Oh she understood who Ballard was, his import. But here's what she told me. She said the looks on the child's (Bale's) face in different shots, scenes, were enthralling, haunting enough. Reading the book would "spoil that." As an author that was troubling to me, but hey, it worked for her and I respected that.
Ballard wasn't a touchy-feely writer. He was the anti-Jodi Picoult, and with all due respect to my fellow Princetonian Ms. Picoult, thank God for that. If you ever want those bitter-sour-salty areas of your tongue assaulted to submission, taste his novel Crash, which was also adapted for film (Holly Hunter, James Spader were in it...it's not the one which won Best Picture starring Don Cheadle). Crash was about people who used car wrecks and accident injuries--both watching the mishaps, being in them--as sexual fetish. That was Ballard, all the way. I think Mom saw that one on Starz or Encore. Ballard's short story "The Sound Sweep" inspired the Buggles' iconic (and oddly prophetic) 80s pop song "Video Killed the Radio Star." In 1981 it was the first video ever played on MTV. I was home on Christmas vacation, with Mom, and likely saw the second, which had to be Haircut 100 or Duran Duran and I recall Mom asking "Christapha, whut that hell is that?" Perverse alright. MTV no longer plays real videos and Mom's dead. Would have made a great subject for Ballard's next dark study, had he not died.
Darkness wasn't what my mother and I shared in our love of Empire of the Sun, of course. Ballard's mezmerizing story, whether on screen or paper, was the key. Well, okay...not the key--the vehicle. She and I were the key. As sticky-uncomfortable, as Ballard's work was, there was always something more human, more hopeful than any of the sugar-coated crap or romances which constantly outsold him at Barnes & Noble. Funny, therefore, how it was over his stuff was what Mom and I shared a unique moment. I still joke with my wife, whenever I reminisce about my mother, through my warbling the notes of the soundtrack's song Exultate Justi by the Ambrosian Boys Choir. Okay, it's strange, but it worked. Just like Mom and I. Just like Ballard.
RIP, both of you...
Posted by Christopher Chambers at 1:42 PM

"In her unrepentent Brooklyn accident she said …"Is it my sore english or is that a typo?


His hedonistic vision is actually more humane than the feel good hollywood flicks.

Now this brings Williams Burroughs to the table, i just started reading again, and i picked Cities of the Red Night: A Novel to start with.

By the way i saw this Brit movie This is England, I think apart from someAlexandro Jodorowsky movies is the best movie i ever saw, did you watch it, what you think of it?

Sweet moment with your mother! It is interesting what memories of loved ones stick out and stick with us.
I have heard of this writer but the movie was more familiar to me. Thank you for personalizing the movie. I'll look out for it. I have seen "Crash" (the version you highlight) in bits and pieces and it was very strange!

Crash was a crazy book and a sick film.

Loved both the book and the film. Every time the film, Empire of the Sun is on television I watch it. I don't know why, I have seen it probably 10 times. But I HAVE to watch. I finally just bought the DVD so it least I don't have to sit through commercials.

@OchymingI saw This is England last summer. It was a great film and a great look at Thatcher's England; the economic stagnation, cities rapidly crumbling into vacant wastelands, the nihilism of the working class. A great portrait of the anomie that often drives politics.

I also thought the directors attempt to divorce the original skinhead culture of the early 1980s from racism and the National Front, now the British National Party was very interesting.

I've only seen Empire of the Sun once, in a movie theater when it first came out, but that song has remained in my head ever since.