[Nat's on tamiflu and quarantined till Monday night...but here's something to chew on till then...]
Been watching "Brick City" on Sundance? It's a documentary series on Newark and its mayor Corey Booker; 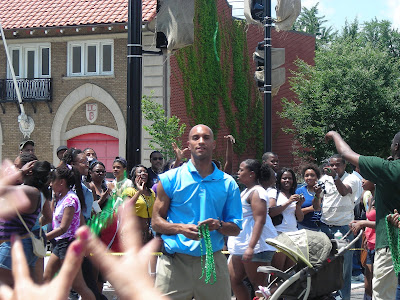 akin to Season 3 of The Wire without the fiction (sorry The Root.com and others, but Nat minted that analogy, not you). Corey Booker--Ivy League mayor, bald-headed and piss colored like yours truly Nat--is the central character, and if indeed fiction scribed by The Bard, he'd be one part Hamlet, one part Henry V. "Once more into the breach/To be or not to be/And Gentlemen in England now a-bed will think themselves accursed and hold their manhood cheap." And he is counterpoint to the Sharpe James paradigm of old school ghettofab urban power politics. Brick City gets its name from, well, bricks of crack, not aging masonry of the projects. Sorry.

Though DC has its bamma chimera, Marion Barry and that old, now inapt moniker "Chocolate City," don't have a Corey Booker. And that's despite all appearances. Nope, no brooding Dane or brave Princ 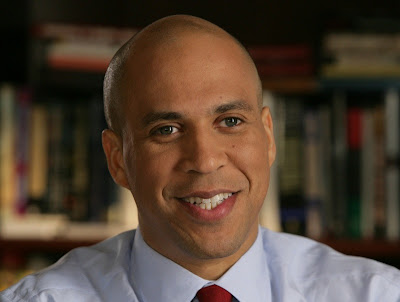 e Harry at Agincourt. We have Benedict in "Much Ado About Nothing." That's my photo of Hizzoner, doing what he does best: PR appearances. But hey, he's not Marion Barry. He's not an ACORN boogeyman or slave to "corrupt" unions or homophobic mega-pastors and church ladies hiding their felonious grandchildren in the basement or immigrant activists, right? Nor is he the automaton, slave to the white developers & Congressional Republicans--Anthony Williams, righty-right? And doesn't he and Booker have a sort of siamese twin quality, right-righty-right?
So check out this Washington Post article detailing how DC Attorney General Peter Nickles ("Attorney General" used to be "Corporation Counsel:" an name change artifice designed to make the District appear more like a real state) had to swallow some state-like cronyism and go against his boss, Hizzoner. Seems Fenty's pals have been getting lame-bid city contracts, funnelled through the Housing Authority from the Department of Parks & Recreation. Nickles reluctantly had to fess up that the City Council should have reviewed the contracts, goven their amount. Fenty's choice for DPR, Ximena Hartsock--a young pretty yuppie Latina in the mold of Michelle Rhee (a young, pretty yuppie Korean, as everyone in this Adminstration must be young and pretty and yuppie-like for Da Mayor, who, sorry to say, isn't an Ivy Leaguer like Booker and our President) flipped the contracts through whilst she was "Acting Director." The DC City Council thence refused to confirm her into the Mayor's Cabinet; forsothe, our Shakespearean hero turned around and named her "Interim Director" ...in perpetuity. Now that, fair Mercucio Nickles rubber stamped as conforming to the letter, if not the spirit, of blackletter law. But a silly move nonethless. The City Council was livid. Just as pissed off, if not more, than the mess with the DC Public Schools and Michelle Rhee's recent stupid--NOT Machiavellian--moves with firing new teachers and not pursuing all these bucks supposedly ripe for plucking due to her Teach for America pedigree. See Nat's take in last week's blogpost (and remember fanboys & girls: Nat's downright wingnut when it comes to the deplorable state of the public schools, bamma teachers, Spanish-only classrooms, ghettofab parents and animalistic students...so for me to back the infamous Washington Teachers Union and the City Council, Rhee and her boss must have truly screwed the pooch). Things are bad in Chocolate...er... Butterscotch City, despite the Obamas, Capitals/resurgent Wizards and bistros/rehabbed row houses in the hood.
Now here's the rub, as Shakespeare would say. Corey Booker has a plan. There's a method to the madness. I don't have a problem with Fenty's method, because I don't see a method at all. He's circumvented the Council to pass legislation and empower his pretty crew. Legislation to do what, however? Build what, engineer where? Improve the life of whom? Lead by innovation, make tough choices, say what might not be popular...indeed sacriledge? Nope. What plan is the prettiest street gang in the District executing? (cricket noise here waiting for answer). Nothing. Empty. Tell me. What he's done is not be Barry, not be (sort of) Williams. Williams at least had a plan: kiss the Control Board's ass, kiss developers' & parking magnate's asses, kiss the Lerner Family's ass and build a sterile baseball stadium so white Virginians & lobbyist clients can watch AA level play from skyboxes...then retire to Belgian beers and savory mussels at Granville Moore's on a gentrified H Street NE. But hey, at least he had a method, a plan. Look, Williams and Barry were opposite sides of the same rusted, crusted coin. Fenty's now showing us that you can indeed have something like a three-sided dice, and when you land on any, you loose.
He's a lot more like Barry than we think. First, just because your cronies are bourgies, go to Rehobeth or the Vineyard and attend First Fridays doesn't mean they aren't like Barry's "Dawgs and Deputy Dawgs." Second, some folk wipe the crac 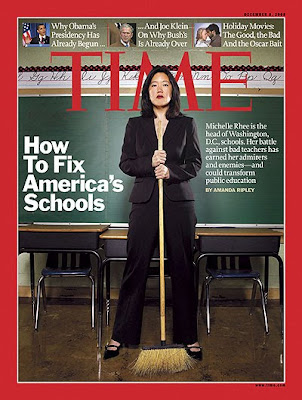 k haze from their eyes and pine for the days when Barry "helped" the citizens of DC. Again, you have to point to--what? The Summer Jobs "program" (which Fenty has likewise abused or allowed to be abused). He's about PR. Show up, look accountable. It works for the white folks, but when Nat polled a neighbor or two, and some yuppies over in Cleveland Park where Nat & Mrs find the koi's grub: "Look, he's not Marion Barry." What a positive thing to put on a resume. As for the schools, "I'm starting to have second thoughts. I was impressed with Rhee but things still seem dysfunctional." As for crime, "[Chief Kathy] Lanier is cool, but the cops seem reactive, not proactive. They seem to be depending on snitching but that's not helpful when I am walking my dog with my son, and rounds start flying between teenagers and Central Americans." Okay then. Lose the yuppies, lose the election. You know damn well Titus Andronicus (Council President Gray) is making himself more visible among the gentrifiers...
Yea and alas, fair Adrian is indeed Benedict in Much Ado. Remember what they called Obama--and empty suit? Well Barack ain't an empty suit, and he appears to resist Fenty's repeated attempt to be associated with his him...in a sort of lightskinned JFK-RFK-esque ressurection of 1961-63's "vigga." Obama's a part-time athlete; Fenty's a for-real triathlete. Perhaps that yearning for vigor should be spent on the HIV/AIDS population, suffering under shameful corruption in city program or nonprofit oversight and downright Third World conditions. Adrian Fenty is an empty track suit.
Booker has similar policy conflicts and problems...and a similar millieu--like rapid gentrification in both residential and commerical. But again, there's a method, a program. Power struggles, fiefdown fights--hell yes. But there's an order, a pace, a plan. Bourgies, Section 8 folks, yuppies, gray haired Republicans in Short Hills, Corzine/Christie in Trenton, criminals, Ricans, Dominicans, old school Sopranos at Satriale's Meats, car thieves and even Newark denizen Redman himself seem to get the program, whether they agree or not. You feel like Booker's doing something. He's on stage, circling the muddy battlefield of Agincourt, or agonzing over the usurper-king and momma's murder. He's Corey Booker, not "No-Sharpe James."
Is there a fourth alternative? Beyond Barry-Williams-Fenty. Can't there be something better? Next week, fans: solutions.
Exeunt, Act I
Posted by Christopher Chambers at 7:06 PM

Wow, I thought he was supposed to be the Messiah for yawl in the Nation's Capital. I saw the materials on the HIV crisis and other issues. So he just runs around explaining potholes, but not filling them? (smile)

I'm going to take issue with some of this stuff but not all. Booker is not a prince, nor his Fenty a villian-phoney like Iago, using your Shakespeare pretense LOL.
He was elected because there was no one who could inherit the "old school" politics of Barry; Linda Crop was closer to Sharon Pratt Dixon than anyone in Ward 7. He was there as a goo-goo reformer in the Booker style, or perhaps Derval Patrick and Barack himself (you lighten-skinded negroes have made your comeback!)
The schools, government services, parks, development, etc. were still in flux and he precisely was supposed to be the young turk with a Blackberry type who could bridge the old DC with the Control Board DC & Williams, with a new multicultural future. People still want that reform. Has he fallen in many issues, yes. But the reform bond is very strong, and Vicent Gray would be a step back, not forward. He's not Sharp James or Marion, but nor is he that fourth dimension you desire. The whole City Council (now YOURS, Jim Graham) is ten times more bought off and indeed dense-headed than the Mayor ever will be.

I do understand your point about Rhee in this and the older post. I am still figuring out, as are most concerned prents. But you are right--she is messing up if she and the Mayor can make the union look good. The Mayor bypassing the school rules to place his sons in the best WHITE public elemantary school in the District, and then have Rhee lie about it, was a low point.
Which brings me, ultimately, to the point. The only person who cna beat Fenty is Fenty.

Goddam he and Corey Booker look alike if you squint real hard--at a distance.

(you lighten-skinded negroes have made your comeback!)

love your writing, and I was laughing hard at your take of Fenty, which doesn't surprise me. I just don't like him...LOL

The return of the LLL, the League of Light Skinned Lawyers to maintain the status quo...DC, Atlanta is soon to follow!

i'm thinking of running dating site purely for the disabled

For finance and accountancy candidates we offer a wide selection of jobs in accountancy and finance together with unique career library and career quizzes. By subscribing to the free mailing list or registering you will gain access to our comprehensive advice library and receive our bi-monthly newsletter.

When using a meat thermometer to check the temperature of meat or poultry, ensure that you do not insert it too close to the bone or the pan. The bones and pans are hotter than the surrounding flesh, and you may get an inaccurate reading. Insert the thermometer into the thickest part of the meat to get the most accurate temperature.

Mornings are not complete without your favorite cup of coffee. It is the perfect energy boost on days when you feel tired and sleepy. When consumed in moderation, coffee provides health benefits like alertness and increased focus.

I saw really much worthwhile data above!