Race Matters (when you think no one is listening)... 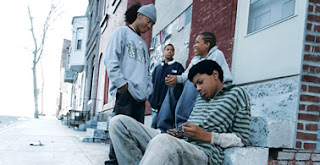 Overheard among the stacks of booze at Liquor King liquor store in Franklin Park, NJ, Route 27 outside of Princeton, December 9, 2006:

Man #1(30-ish white guy, casually dressed but appearing to be a professional, shopping for some sort of Christmas or football party): "You guys going to the movies tonight?"

Man#2: But yeah, it's Africa, so who cares? Is it gonna blame people for buying diamonds [laughing]? I like DiCaprio's stuff. If he wasn't in it, and that girl [Jennifer Connelley]...sheesh remember what a hottie she was? I think she's a good actress. If they weren't in it I wouldn't even think about it, OK?"

Woman: [giggling] Hottie? I think she's like an activist or something now, right?"

Man#2: "Like Angelina Jolie, probably. That explains it [chuckles]. Let's see 'Apocalypto' because it has more action and I can't take the other stuff because that's too violent [query: what's the difference between action and violence? answer: sobering reality]...[pause, shopping cart rolls, then...] She [Woman] likes 'Deadwood' and 'The Wire' and that has got some crazy stuff."

Man #1: "Yeah, I've seen 'Deadwood' a couple of times, but I can't get into 'The Wire.' It's like [voice lowers], all these black people. I don't even recognize the actors. I think Will Smith's wife--Jada Pinkett--plays a crackwhore in it. She [?] says the dude from 'Grey's Anatomy' who started the fight is in it. But yeah, it's like, too real. All these black guys and then there's stuff about politics and that's confusing if you don't really follow it."

Man #2: "You see these people on tv and I just surf to another show if the game is over. I think it's a black show."

Woman: "They call it [The Wire] the best show on tv. Um...it's hard to get people to watch it 'cause it's about real things but I think they [?] see unfamiliar things and just watch something else, ya know?"

I think another experiment would entail showing a trailer to HBO's current movie special "Tsunami" to sets of viewers--one white, one black, and track who tunes in. The two principal characters are black Britons on Christmas vacation, played by Chiwetel Ejiofor and Sophie Okonedo. The movie's set in the wave's aftermath; they are searching for their daughter, lost in the carnage that was once a posh Thai beach resort before the morning of December 26, 2004. I smell Emmys, but hey, middle America wants to see Emmit Smith dancing again, not people of color in a TV drama. And don't get me started on Blood Diamond. Nobody saw Hotel Rwanda either. Maybe if Lindsay Lohan, or, to be fair, Beyonce, were in it, people would actually buy tickets to the film?

If this little slice of life doesn't encapsulate and elucidate on the role of race and ignorance in the entertainment industry--and I include books--in our pop culture and our entrtainment tastes, then please school me otherwise with your comments.

Posted by Christopher Chambers at 2:23 PM

I am not sure if you can make this generalizations based on eavesdopping! However, it's hman nature to be entertained by people who look like you over those who don't. That said, too many people are locked into boxes of race and class. White people who listen to black music are "cool," but black people who like rock or country are not, so goes the conventional wisdom. I have not watched The Wire, and I haven't heard of Blood Diamond. I would like to learn more. There are people who do indeed see people of another race on a program and then change the channel immediately. I am guilty of that I admit. The key here is to educate people and get them to try different things. Perhaps these people in this store were just sports fans and had no interest in anything as far as decent drama goes (TV or film). Such people are not racists. They are just simpletons! :)

I do understand your thrust as I have come to read your blog over the past few weeks. I see the "arcane" nature of racial ignorance and demographics in the arts and entertainment which you seek to illustrate. I don't agree with all of your theories, but I do appreciate your passion.

This is nothing new, Chris. What you should have said is that white people and black people have identical tastes! We won't watch intelligent dramas with black people figuring prominently, and neither will they! We will watch utterly tasteless, ghettofab, stupid, insipid, formulaic, cooning, loud nonsense, and so do they! This is true for movies, books, plays (or blogs).

I am a Wire devotee, four seasons worth and for real it is better than the damn Sopranos.

Finally I think you just happened upon some white boys whose idea of compelling African American television is The Best Damn Sports Show.

Chris, great post! Now this is what I love, the "real world" when we don't think others are listening or watching us.

But hey, what else did you expect? It's called ignorance. And before any of your white readers jump all over me; yes, some black folks are guilty of it too.

And "snowman" I happen to like U2, does that mean I am not cool?

Field Negro I was just commenting on generalizations. I like U2 as well. I am an older white male and yet I also like Kanye West. Does that surprise you?

The Mayans aren't as happy about Apocalytpo as the media reports, so maybe it is a perfect movie for frat boys and their chicks.

I saw the Tsunami:the Aftermath movie chapters and I'm sure it wouldn't get a look from "white middle America" not because of the black actors, but because of where and to whom this event occurred. Your liquor store folks may have horrified by what happened in 2004, but I'm sure they had no idea where Khao Lak or Phuket were, or how many Indonesians died in Banda Ache, or the families washed out to sea from the "Train of Death" in Sri Lanka. Death in the Third World is no big thing to we Americans, regardless of color, but that's especially true of white America on all class levels. In 2005 it was white conservative church people rather than African American activists who were speaking out on Darfur, but even that constituency lost interest because no big number of people in their own groups cared. I have even read many commentators who have said that 9/11 was a foregone conclusion because we know or care nothing about the rest of the world beyond a narrow view.

It's called White Guilt! If you had asked them about watching The Wire or going to see Blood Diamonds, you would've gotten a song-and-dance routine about the day/time that it came on or the violence in the film. But it comes down to the fact that white people don't want to spend their money to be preached to about race relations or told that Black folk are oppressed because of them.

Even though The Wire (which incidently is the best show on television - if you like the Sopranos, you'll love The Wire) doesn't play into the White Guilt-thing, there are enough Black faces on the screen during any given epidsode to scare many whites from even giving it a shot. Unfortunately, many in white America are not ready to welcome Blacks into their homes unless they are cooning, dancing, singing, or playing sports - now that's entertainment!

plez sez: this is a cool blog, I'm going to add it to my BlogRoll so I'll know to visit it often. thanks!

The Wire was not nominated for any Golden Globes Awards for the reasons your have in the blog.

Reverse Oreo
It is still true in America that only the brightest and the best minority people succeed through normal channels. Clarence Thomas is the rare exception that proves the rule, but then he was appointed not elected.

Obama is a walking proof, as was Strom Thurmond. One can be a dumb white racist and be a senator for life, but you have to be the best educated, the sharpest, and the most talented to be a minority senator.

I loved The Constant Gardener! What a terrific movie. Hotel Rwanda is the most rented Netflix movie, or second most rented movie, there is a large audience white and black for smart movies. Blood Diamond's on my list of must see for the holiday.

Regarding the people in NJ or where ever you overheard them, they are just morons. Unthinking people. There are plenty of those in the United States as well - and they come in every color also.

What struck me most about the post is the lack of intellectual curiosity that these people had for anything. True, that's not a white only thing but when are white Americans going to get curious about stuff from black & brown people that doesn't
1. help them to laugh (see D. Chappelle)
2. help them to them dance (see James BRown, Rick James, Michael Jackson, Prince, Kanye, P-Funk)
3. sports