A word on the presidential circus...

Before we get to my interviews with actress Victoria Rowell, Peter Schmidt, Stacy Patton and Nathan McCall, I just wanted to announce my current first choice for president. Seeing that either the Karl Rove/Fox News wingnuts or Hillary have planted this dangerous and silly Obama-is-a-radical-Muslim lie for the rednecks of South Carolina, and per usual he's said nothing--just exuded hope. I am convinced he is indeed a lightweight as stated in previous posts. John Edwards is a bit of a cretin as is Joe Biden; Bill Richardson's great but has no shot at winning. On the GOP side...please. Even if my boy John McCain redeemed himself, he still carries the stink of the war and his earlier kow-towing to the Bushites. 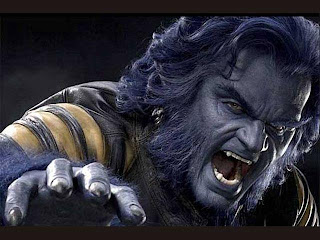 So...vote Hank McCoy. Yeah he's a mutant, but hell, he's knows the issues, he has no agenda dictated by shadowy handlers. And he's even an intellectual. Frasier Crane with fangs. Literally.


Check back soon.
Posted by Christopher Chambers at 10:44 PM

Unless Obama can prove that Hillary's camp created the email campaign, what is he supposed to do? He already did the Fox News Boycott when they did it officially. Is he supposed to wear a sign around his neck saying, ' I AM A CHRISTIAN'?

Unless you can trace it, what exactly is he supposed to do about the phantom emails?

I disagree, and I understand what dear Nat Turner (Mr. Chambers) is saying. All of this oratory and no fire. All hope and eloquence and no plan. He doesn't need to blame Hillary--he can insinuate. Or he can blame the conservatives. He needs to fight fire with fire, and that's what the people want to see and hear.
I think the "lighweight" label is unfair, however and come on bruh--no need for invectives!

Wasn't "Beast" one of the "original" X-men from the comics, rather than the movies.

John Edwards is, not all there it seems to me

VERY reluctantly, I agree with Mr. Chambers regarding Barack's need for a more aggressive, sharp approach.

Always felt Obama was just a carrot , i am not impressed. Why do I feel a "sting" " the old okey doke " coming i/0 bush Rudy Giuliani!!!! When is the new Micheal Moore movie coming ?