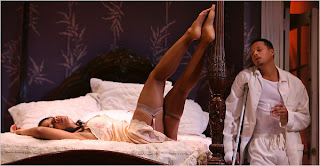 This weekend in NYC, whilst attending to book biz, hanging with my aunt on the Upper West Side and visiting my 95 year old grandmother, my wife (Mrs. Nat Turner) and I scored second row seats at the Broadhurst Theatre to view Tennessee Williams' "Cat on a Hot Tin Roof." Yes, starring Mr. Babywipes himself, along with a cast only seen lately in "Welcome Home Roscoe Jenkins" or "Meet the Browns:" Phylica Rashad as "Big Mama" (as in the peckerwood meaning of the term), James Earl Jones as Big Daddy (reprising the Burl Ives role as a nasty old fart rather than monsterously cruel fat ol' cracker), Giancarlo Esposito and Lisa Arindell Anderson doing good imitations of my brother and my sister in law (smile)...and Anika Noni Rose of Dreamgirls as Maggie the Cat. Note to the world: Anika makes the play. Period.
I guess I can try to be diplomatic and say this: no, I wasn't disappointed with director Debbie Allen's vision, for it was Debbie Allen's vision. Circular comment? Nah. I think her direction is the factor that could have morphed Tennessee Williams' genius into something just above a Tyler Perry bama-ass "stageplay." Couple with that--or is there cause-effect?--the loud cackling, gasps, mewls, coos--that's how many black folk cheer in the theatre. Laughing at stuff that doesn't need to be laughed at. It's a gut-wrenching drama, after all, not Madea. OK, OK...lest I sound too siddity, when Shakespeare's plays debuted at Stratford on Avon, folks were in the front cheering, jeering, gasping, tossing rotten eggs--and that was during the serious tragedies and histories, not the bawdy comedies!
The PERFORMANCES truly save this production and make a classic. The cast stepped up their games. And as I said, Anika blew me away ( Beyonce would have ruined this play). As for James Earl Jones and Mr. Babywipes, they sucked me in, gave me doubts, riveted me...their interpretions of Brick and Big Daddy where as complex and satisfying as I have seen or read any father-son characters. Of course some morons would be satisfied with Morris Chestnut as Brick (rippling-pec Boris Kodjoe joins the production in another week) and Cedric the Entertainer as Big Daddy. But this is the stage. The REAL stage. The pinnacle of our first form of human expression.
So take it from me, it wasn't celebrity-worship or having an icon like James Earl Jones look right at me and smile that makes sway me to thumbs-up this play. This was a show that redeemed itself through its actors, through the craft. Too bad the audience still measures this stuff against "Norbit." Too many of us either look like or have tastes like "Rasputia!" When we got home (we drove) we unwound watching Chris Rock's "I Think I Love My Wife" on HBO. The flick was a box office flop. I thought it was entertaining. A thousand insipid white movies like it are made. But we didn't support our one pleasant and indeed (at times) realistic black version. Not enough buffonery and loud talk, melodrama a la The Browns. Hmmm, if Tennessee Williams had been a brother coming up today and not a mincing gay redneck pet of the jet-set (who could rival Truman Capote in that?), would he ever have been published and produced? Yeah, you know the answer.
Posted by Christopher Chambers at 11:06 PM

You are SOOOOOO lucky! How much were the tickets? Doesn't Terrance Howard leave the production very soon to do another movie?

I've read the main critical reviews and they seem to match your comments: The individual performances are great but there's something "missing" from the vision and overall production. Would George Wolfe have done a more nuanced yet powerful job?
On the other hand, Broadway has to make money. If Debbie Allen knows her audience and knows how to entertain, then she'll motivate a production (and actors) to push the buttons of the audience and get the ladies who come into New York by bus tours pack the seats!

Lord what does it take to please you.

Do you think Terrence made Anika wipe with Baby Wipes after each Act?

the night i saw the play, very early in production, the audience was more dramatic than the stage actors.

Anika is the real deal. I agree with you regarding Chris Rock's movie. In Hollywood now it's all about Tyler Perry and maybe a period piece ala The Great Debaters once in a while.

I agree that our culture tends to measure the quality of a theatrical production (be it stage or screen) based on the the amount of caricatures it has that make us laugh. The beauty and sadness in that is that while we can find the humor in some of the worst situations life throws (beauty) that same lack of seriousness leaves us with the appearance of being uncultured and unprepared to appreciate true art. That's why Tyler sells so well.

I dislike Tyler Perry because i don't feel he takes the craft of movie making or playwriting with the same seriousness that others do. The constant ad libbing and side jokes no one but the cast get drives me crazy.

However, I support not only his work, but also the work of pretty much all of our black artists, be they writers, REAL musicians, and actors because if we don't stand up for them the white mainstream most certainly won't give them more dollars or take a chance on that one who is coming up with real talent.

I just think that it is our duty to spend our dollars AND be critical when assessing the product. So many complained about Why did I get married that I think he actually listened in the Browns. While it was still some moments when I said that was stupid he toned it down considerably for the play and the characters actually had scripts instead of a ton of ad libs that were not funny.

All that said I look forward to seeing Cat and I am glad it was worth the trip and the money!

So your thesis has nothing to do with direction or the acting. Your comment is that African Americans are coarse, uncultured often stupid rubes when it comes to quality art (literature, stage, film)? You are correct. The only thing qualifying you as misanthrope rather than an Uncle Tom is that white people are worse philistines. Only a pretentious, out of touch tiny elite "supports" the arts. Within that group most are fools who've made their billions on dumb luck and then screwing the rest of us to keep it. The vast majority of white Americans are either saying even NASCAR has gotten too glitzy, or that American Idol is the highlight of their week.

Playwright1: I think I'm neither a Tom nor a misanthrope (ok, the latter maybe a few times). I have no problem exposing black America's dirty laundry and sad foibles when it comes to books, entertainment, other issues. But that's out of yes, a Cosbyian "Come on people!" philosophy. These things we can control. Believe it or not, I also think there is inherent goodness and a love of learning, expansive thinking in most people. You just have to dig it out of folk ater you slap them silly...

Nat, I saw this play recently too and I have to say: 1) Terrence Howard is just as good looking in person as he is in the movies (babywipes or not); 2) Anika is fantastic!
I was impressed with this production. I agree with some of what you said, as the audience I was in also laughed at parts of the story that were not funny. However, despite that -- the performances were not bad. This was Terrence's first stage performance, and in the second act when he has his scene with Big Daddy, I really felt for him. James Earl Jones was brilliant -- enough said. Phylicia Rashad turned me off at first with her portrayal of Big Mama, but I also found myself feeling sorry for her in the second act. All in all, I would rate this a pretty good version of this complex story. I do not want to muddy the waters by saying it was a good "black" production. When are we going to get past that? It was a good performance. Brave. Period.

Nat, I saw the production last month. I definitely thought it was entertaining and it kept my attention throughout.

I thought Anika was the highlight of the play. Especially in Act I, where she is pretty much the focus of attention.

I thought James Earl Jones and Terrence Howard had good chemistry in Act II. Although I felt like THoward came off a little "mechanical" in his delivery.

Yes, the audience laughed waaaaaaaaaaay too much for me. I knew the play had comedic moments, but the audience treated it like the entire play was a comedy. My friend and I kept looking at each other and saying, "What is so funny?" I chalk that up to most of them coming to see "stars"(I know 99.9% of the women were there to see Terrence) and not being familiar with the nature of the play.

I thought everyone did a good job, but I think I was expecting a little more from Terrence Howard. I know it's his first Broadway appearance and he has to adjust, but, I don't know...I don't see him as this great, critically acclaimed actor everyone hypes him up to be. I know he has been in some critically acclaimed movies, but I don't get the hype.

Maybe I just haven't seen him in his definitive role yet. It's obvious the talent is there.

The moment I heard James Earl Jones would be Big Daddy...

Cat on a Hot Tin Roof is my favorite play - period.

Can't tell you how many times I've watched the movie.

"Playwright1" is right on all counts. You people--I mean people on this blog, not the perjorative for blacks--need to wake up.

I think, because I was raised further south, I probably laughed at more of the play, than if I had grew up in the north. I think it is more cultural than being uncultured. I read the play, the movie, and saw the TV version with Burl Ives, but never saw a live production.

Brother, Sister in Law and their no neck children were hilarious.

I will never be able to take Babywipes Howard seriously again but I would like to see this production.

thanks for your review. I'm in Texas, nowhere near Broadway, but have loved this story since I saw Taylor and Newman on screen. Awesome work; glad Allen and the rest of the cast did it some justice. ;)