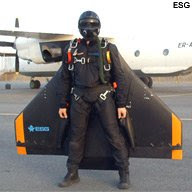 nel, History Channel and the like (hell even the bass fishing and duck hunting stuff). And Barack is right, sorry to say: it is a distraction and a tonic for white boys who cannot bring themselves--lest they destroy the social contract--to blame OTHER WHITE PEOPLE for so many ills...and it's amusing. Case in point, check this out. Straight from the 1980s GI Joe versus Cobra crap. Of course, it's enough to make any Sean Hannity fan cream in his draws, but come on. Nevermind the fact that Chinese likely already have the plans (sold by one of our defense contractors). The more traditional Bush-Cheney like adversaries like random Jihadis on a rooftop in Pakistan, or throwback Taliban in the hills or Syrian guard atop a guardtower or FARC guerillas high on cocaine in the bush are going to see this coming and say What the F***k?! And then blow this dude out of the air. Pentagon as themepark. Why not?
We can't provide decent health coverage for folks. Affordable housing. Clean and renewable energy...but this is what gets us hard...this is proper use of tax dollars? Hell even the Blackwater folks would blush. Then again, I heard our 11 year old prez, Dubya, refers to the president of Iran as "Destro." Yo Joe!!!
Posted by Christopher Chambers at 4:21 PM

Of course, by that logic we never would have put a man on the moon, sent probes to the outer planets, built Mt. Rushmore, built the Lincoln Memorial, established the National Endowment for the Arts, funded public radio, or -- more on point -- invented precision weapons such as the JDAM.

You'll always find some extreme-sports near-high school dropout who'll join what--the Air Force based on some commercials on G4 or MTV to pilot this thing. The Pentagon will keep the many crash landings secret while Fox News will unveil this new weapon in the war on terror!

[White] boys and their toys...

Rocky, extreme-sports enthusiasts can don a wing suit and get high thrills. It's something I would consider doing myself. Search on youtube for "wingsuit". I find that more exciting than putting this thing on and being human skeet.

There's a chance you're qualified for a new government sponsored solar rebate program.
Find out if you're eligble now!