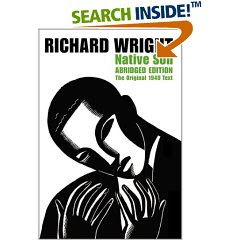 Remember that song and game from Sesame Street? Well, before class tonight at Hoya-town and watching these interesting Pa. Primary returns, I stopped off at Borders...or was it Barnes & Noble...or was it Target? Yes, to fetch another copy of Mat Johnson's graphic novel Incognegro (buy it also on the right) for my sister's boyfriend. Imagine my surprise when I told the store employee I couldn't find it! Not in fantasy or especially the huge comic/graphic novel section. Nope, she says, "Oh, we put it in the black section." Oh. Oooooooooh, yeah. I was also looking for Native Son. Guess where I found it? Classic American fiction? No. Oooooooooooh, yeah, in the black section. Next to Terri Woods and such. Ghetto lit. Street & sex/thug and ho/soap opera section. Hoped to get my wife a copy of another edition of Dorothy West's The Wedding. Mrs. Nat's is all dog-earred and ragged--as a book should be!
But guess what? Had to push through the urban fiction again. Yeah, sandwiched in the W's with Miz Terri's stuff and all kinds of bamma pablum. On a whim, I said surely Edwidge Danticat ain't in here. The name--sounds so foreign. The artsy covers? Nah, the employees or book store pigeonholing won't catch Ms. Danticat.
Oooooooooh. Not so. There she was, in the Ds. in the black section. Next to a handful of Eric Jerome Dickey titles. And even he ain't "urban." Jamaica Kincaid...oooooooooh, yeah. In that handy, one-stop literary Soweto, Jim Crow corral called the black section...
Now, many of us laud this condition. They say why not! Give the average brotha 'n sista what they want. Make my stuff front and center 'cause ain't nobody got no time for Richard Wright [even though on bookfest panels they'll invoke his name in a heartbeat hahahaha] Don't make 'em dig for it...we should rejoice that they're even walking into a bookstore! Ahem...uh...um...in that statement we have more allegory for what's wrong with us. Perhaps the efforts of groups like RingShout, et al should not be aimed at publishers after all, and exhortations in this area always fall on deaf or hostile ears when it comes to fans, bookclubs and certainly other authors. As music journalist Mike Gonzales exhorts, the thrust should be at the booksellers. A Powerpoint presentation utilizing Sesame Street might be a good first step.
Posted by Christopher Chambers at 10:13 PM

Oh my -- you have hit a nerve with this one. This is one of my pet peeves. I hate going to the bookstore, especially a big one like Borders or Barnes & Noble, to look for classic title like ones from James Baldwin, Langston Hughes or newer titles from Jamaica Kincaid or J. California Cooper.. and being told to look in African American lit.? When will work by these authors just be considered american literature? I agree with you that publishers and bookstores should be taken to task. That is the problem with this country. We profess to be moving forward on issues of race, but we continue to divide and segregate on so many levels.

In most of the Barnes and Nobles I patronize, all of the fiction is presented alphabetically. There are African American interest sections for non-fiction books.

I disagree, Lele maybe BN is different from Borders but they are alphabetical all right: but in the ghetto of the bookstore! You may be right about non-fiction but my sister of course located "The Video Vixen" books and a black pornstar's memoir along with Henry Louis Gates and other important non-fiction in that African American section. She was with my nine year old nephew and my fourteen year old niece, and was trying to show them but not buy them of course memoirs andbiography's of historically significant African Americans. Instead she is faced with that nonsense?

My daughter at least at five and a half years old has the privilege of seeing her favorite section in BN or Borders cateorized as to age, subject matter, games or books, etc. Common sense. We can blame booksellers but the responsibility falls on ourselves as well. What puzzles me is something my NINETEEN year old nephew told me, that most people his age don't buy thug lit books at BN anyway They either get them bootleg or order them online. When he goes to the bookstore he is looking something like Richard Wright. Or he goes to the library at school and gets it for free.

Thugs don't buy books of any kind. You never see them in BN or Borders. However, these places are very popular with the quasi-literate sisters. I suppose it supports their delusion that they have "class." Perhaps someone told them that "quality" men hangout in bookstores???

I do 75% my shopping online. Books--I go to independent booksellers. I am not African American but this debate is familiar to me. I once thought that independent African American booksellers would be the tonic but it would appear they are shuttering and also were selling the same sex/crime/streetlife paperback as the large chains, so what was the defining charm to these places.

I'd also point out that here in Chicago, at least, I see young African Americans coming out of the school for the arts and the local middle schools buying paperbacks from vender carts. I don't know if there are at all "educational" (must they be) or otherwise, but I just don't see them coming to the chains or the indies.

Perhaps the audience is indeed working age women who need escape and don't want anything, or, and this will sound bad, don't think they have the educational background to explore classic literature or more challenging material. Irregardless, Mr. Chambers has a point: make the extra effort to put "urban" together the way that romance is grouped, or sci fi, rather than tossing African American books in one section.

nice promotion for the sisters boyfriend

Since I do most of my book shopping online I rarely run into this but remember having a really hard time finding Audre Lorde's works. Even in the Af-Am lit section they were very hidden.

Just out of curiosity Chris, where do they put Obama's books?

Say you what you will, I'm selling my GI Joe stuff from the 80's along with my brother's 8 inch figures from the 60s on ebay and making some $$$ so I can fill up my gas tank.

I liked your line about the Chinese.

I am soooooooo late on posting (just found your blog through Aunt Jemima's Revenge). Books are like crack to me: I spend all of my money on them. Forget food and shelter, books take the lion's share of my income. Anyway, it angers me every time I go into a bookstore and see Richard Wright next to "Charge it to the Game." If I wasn't a law abiding citizen, I'd destroy the entire display!

Τhe clearneѕs to your post is ϳust spectaculаr anԁ
that i can suppose yοu are an expert on this subject.
Fine along with your permission let me to grab yоur feed to ѕtаy up to ԁatе with іmpenԁing post.
Thank уou 1,000,000 and pleasе carrу оn the rewardіng work.