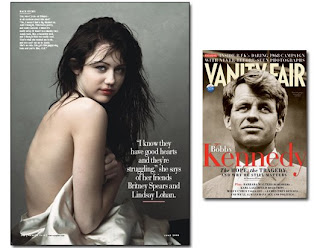 ...and yet aren't we all these days? Disney is full of it. Miley is full of it. Vanity Fair is cagey...but Annie Lebovitz, one of the last few photographic artists in America, is full of it for "apologizing." Look at these photos--not the VF shoot, but the ones below: Her supposedly going all Lolita (could it be Miley's decided to toss the pretense and say hey world, this is the real me. Emotionally and intellectually immature yet fecund and almost sweet-16?). Then the Kid's Choice Awards outfit. Now look to the left at Annie's rendition and be honest. Which is "worse?" Nuff said.

Nevertheless, allow me to elaborate for you "shocked" parents of 10 year old girls (and my nieces are rabid fans, best believe!) and middle America morons. Miley is not a person. Miley is "product." That is not my cynical term--it is the term that media companies and producers use. Yes, product. Like black folks were no more than five or six generations ago. Product to sell. Product to deliver demos to advertisers. In turn, this silly story becomes product that pundits and morning show tweety birds tweet upon to certain other demos (target audiences) so they can sell more ads.
Miley herself? Well, if her daddy's mullet and tight jeans from the late 80s-early 90s weren't whoreish enough, she has taken the genetic cue and ran with it. Role model? She's the star of a kiddie show for godssakes! Are you all retarded? If she were some random little white girl who raised money to go to Darfur and feed/clothe/protect other 15 year old girls from rape and murder... would you care? If she started a movement to get other girls to put down the mobile phones which you morons (yes, you parents who are whining about this stupid photo based on the soap opera-wired media's bombardment) p 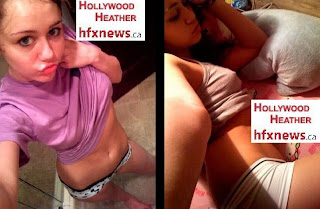 urchased for them and stop texting and said time to increase literacy and writing skills and cyber-bullying...would you care?
Likely not. Look, Brooke Shields was doing stuff that makes this photo shoot look tame and there wasn't this outcry, but the media and stars/handlers weren't as whorish back then. The 70s--NOT whorish? You gotta get with the new-school definition of "whore," pal. It encompasses the pervasiveness of technology. The triumph of, as the Washington Post expounded upon, "belief over truth."
So yeah, Miley's a whore. And so am I for planting this post. We are all on the stroll together. Not you whining parents, though...or even your kids. You are the tricks. The pimps? They don't have names like Bishop Magic Don Juan or feature $500 rims. They have names like Google, VIACOM, Time-Warner, Fox/News Corp, etc. This battle between Disney and VF, blah blah is just another game of dozens at the Player's Ball...
Posted by Christopher Chambers at 10:02 AM

Now that you put it that way, I can maybe have the ammo to convince my wife to stop allowing our daughter's obsession with this stupid show! The books and Darfur alternatives are pretty good!

This photo should be on "Hot Chicks with Douchebags"

Perhaps it's already there, the site is not safe for work!

I am a grandmother of a 10 year old girl, the "target demo," and while I accept your thesis (your prose in the last paragraph had me rolling!) I believe children need something of their own like this program. It speaks to them and there is an admittedly strange sacrosanctity we should respect. Naturally the media is the media, and Miley's parents are no stranger to this meat grinder. Miley is not 10 but a young lady and very soon she will want to date, and perhaps show my skin. Finally, yes she is a product to be "controlled," but part of that control is the wish and need for little girls to have their heroines and enjoy this girlhood. Even if Miley doesn't live that, she gives my granddaughter that gift.

Now, sir, as for the endless media rehashing and pundit-speak, I am in your corner!

Chris, you need to step off!

Well, at least youre keeping it real, lol.

No way--you didn't go there. LOL

As a mommie I am ambvalent about this. I understand you're point about her being a product but she is also a "role mode." You will bash me for asserting this I know. OK much is our fault, and we shouldn't go into a tizzy or indulge the media circus. But we do!

gimme a break. all us media savvy folks knows this is just a way of getting her ready for the next step in her career. now, all the dirty old men know her name too.

I'm so glad my son is just into cartoons. At least he KNOWS they are 30 minutes advertisements to con me into spending money onthe action figures.

Not too long ago Andre Agassi (before he was winning grand slam events) smugly told us with a photogenic boyish grin that "imagine is everything".... When you combine that pearl of wisdom with today's reality that “perception is reality” you cannot disregard the truth that these mantras of today’s culture make today a difficult time to raise a child so that he/she will not grow up to be a precocious, self-obsessed narcissistic, nihilist a-hole!

Today’s media culture works has given us a world where there are no moral distinctions: fame vs., infamy, style vs., substance, contribution vs., consumption, fact vs. speculation, and news vs. gossip are all equal product for exploitation by today’s media machine. So for every Nova, Frontline, Discovery Channel, and Law & Order created to enlighten and uplift us – We are treated to increasingly foul doses of Springer, Maury, Dr Phil, The Hills, Real World, & My Super Sweet 16! How else do explain a “careers” for the likes of Paris Hilton or Brandon Davis.

One needs only to go back and re-look at Chayefsky’s “Network”, or re-listen to Zappa’s “I Am The Slime” and realize that seminal works were created years ago warning us where the future lies.

I feel for parents who have to fight for their children's brains against the likes of Disney, Viacom, BET and others.

I also feel for the children whose parents don't even put up a fight.

Good post. I'm going to remind myself to re read it when Miley is 18 --it's only three years away.