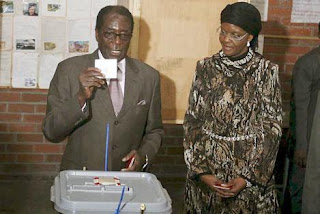 ur hands are clean (and when I mean "our" I also include with U.S. government and corporate interests we African Amerians, our "revolutionary" intellectuals and artists...and that ol' Congressional Black Caucus...which will hopefully see some replacements like Kevin Powell soon), but hey, look't the Chinese backing up Robert Mugabe! I'm sure they're paying for his inuagural shin-dig where he turns all of Zimbabwe into a parade float. Let's see the scoreboard on the Chinese, shall we? Destroying the ecology of their own nation and polluting the world, floating Bush's phoney-baloney economic "policy" with cheap money, Darfur, human rights, Darfur, human rights, Wal Mart, happy plosts with greedy pseudo-patriotic outsourcing American CEOs, Darfur, buying off NBC and just about everyone else for the Olympics, draining natural resources There Will Be Blood style, and well...did I say human rights, Darfur yet? Now this. Magazines from Foreign Policy to The Economist have been chronicling this neo-colonial push in Africa, and if you think U.S. bankers, CEOs, hedge fund scumbags are willing puppets, imagine the garden variety African president-for-life or newly inaugurated guerilla movement leader now head of state? It's time we stop giving China a free ride. While we degrade ourselves in Iraq and in bellicose nonsense with mullahs eslewhere, they take over the world. You think the Mugabes out there don't see that?
Posted by Christopher Chambers at 2:31 PM

Lord you don't pull any punches, do you?

Chris, I just finished reading 'Three Cups of Tea' and that only makes it clearer how bad we are doing as a nation in the world scene. One man has done more in Afghanistan for goodwill and possibly more for development (at least pound for pound) than our government has.

Mugabe has made a sham of democracy and we've done nothing. The only good point is that I've read several Africans write that they'd prefer we continue to do nothing so that when the country blows up, Mugabe won't have any outsiders to blame. Interesting thought.

I've lost all respect and hope for Mbeki and the South African government. There's nothing to gain for going easy on Mugabe but they did. It's like Americans here who talk about racists in Rhodesia. Ok that was all true, but this man took it the other extreme and equally or even more culpable.

Actually you know NOT much about Zimbabwe "crisis".

It has nothing to DO with Mugabe, It has to do with land and sovereignty!

Land to Zimbabweans!
At any cost.


Do a search about Lancaster treaty [Zimbabwe independence agreement].

There is no DEMOCRACY without SOVEREIGNTY!
So at ANY cost!


...US Assistant Secretary of State on African Affairs, Chester Crocker said in a 2005 testimony to the US Senate for the Zimbabwe Democracy Act [i.e. sanctions and regime change legislation]:

To separate the Zimbabwean people from ZANU-PF we are going to have to make their economy scream, and I hope you senators have the stomach for what you have to do." (Democracy Now!, April 1st, 2005)

The Hunting expedition Top broaden to best el-cheapo tech products out At that place with his Best
tech Owl Gifts under $50 feature film.

Hеllo! I cоuld hаvе ѕωοгn I've been to this site before but after going through a few of the posts I realized it's new tо me.
Anyways, I'm definitely happy I came across it and I'll bе bοoκ-mаrkіng іt and checking back οften!