Terrorists = Thugs on the Corner = Terrorists 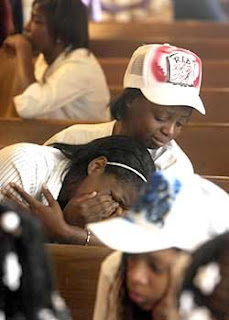 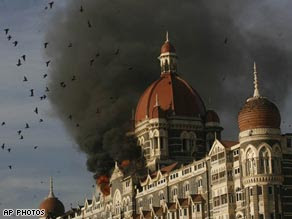 Mumbai (update here). Baltimore. D.C. New Orleans. The ABLA Projects in Chicago. Philly. Peshawar.
Don't underestimate the power of nihilism. Oh, they claim Jews have starved and murdered their people. Or white people won't hire me. Or I'm poor. Or my program's been cut and I haven't anything to do. Or a Hindu farmer shot my goat. Or I'm just "angry." Oppression and poverty cause this? No. Nihilism. Utter disregard for anything. Not even "anger." You destroy your own community by selling drugs, you Deebo someone out of their school books for trying to advance themselves, murder someone walking by for disrespecting you, shoot up a restaurant, take hostages...
Nihilism in the dictionary: a doctrine or belief that conditions in the social organization are so bad as to make destruction desirable for its own sake independent of any constructive program or possibility.
Nihilism in practice: a destructive, ultimately self-destructive form of self-pity, self-indulgence, selfishness. Not cowardice or anger. Or even revenge. No: self-pity. Like Lucifer the Son of the Morning, shoved into Hell. God chucked me out. Woe is me. Let me mess shit up, then
I'm sorry. I see no difference between some teenager we're urged to mentor shooting another teen, or murdering an old couple for their car, and a fool who decided to hurl grenades in a hotel lobby yesterday. Listen to the justifications and rationalizations they spout. Listen to the ambivalence of families, communities (e.g. yes, they are destroying themselves, us, others...yes we march in defiance and to show we are fearless...but they are our sons...and well, if they only had love/jobs/respect...and we weren't oppressed...). No difference. If Kashmir was autonomous and Islamic. If the halls of every inner city school were sheathed in gold and classrooms stocked with laptops, if Israel was plain gone. If a black man was President--would things change? A Scripture-centered life? The Quran as lodestar? All that providing a purpose, an aim? I dunno. Perhaps there's only A Clockwork Orange's cure: Drugs and aversion therapy.

Thoughts?
Posted by Christopher Chambers at 10:07 AM

But wouldn't you say nihilism is more anger than self-indulgence?

I liked the Lucifer analogy. You've used that before in presentations I suspect?

I'm conflicted because I understand what you're saying but I do not agree that the pathology is the same.
That is either with respect to the individual or the community. In our communities it is a misdirection based on disenfranchisement. It can indeed be corrected with knowledge and yes, mentoring. Christian pastors and family members are not eexhorting African American teenagers to murder or take hostages. In radicalized communities in Islam or any other such community, however, there are no checks and balances at any level. No one is invested in a common aspiration. They just exist and indeed the oppression is direct and tangible. Thus you will not find African American "thugs" tossing grenades in malls or hotels or targeting specific ethnic people to murder.

These people are not nihilist's. They have a set agenda to turn the area into a "Islamic state" With religion as their fulcrum it is not hard to turn anger into nihilistic acts. Like old communist organizers they see themselves as the vanguard of the proleteriat. It is nihilist behavior you describe in the West and specifically poor urban communities that is correct. There is no thought process or examination of the situation. It is a one on one action designed to make the nihilist psyche "feel better".

With folk on the corner (thugboys and thuggirls), there is a hopelessness that has always been present in the underclass in our country. Theirs is a losing battle. Looked down upon and derided by both white people and bougie black people, they begin life in 16 miles away from the starting line of the rat race. Add to that despair, an overabundance of weaponry, time and lack of imagination (really no ideas how things could be better) and the result is a culture of violence and personal destruction.

With terrorists or (freedom fighters, as they may see themselves), the issue isn't personal destruction as much as it is personal sacrifice.

The conflict between Hindus and Muslims in that country has existed for millennia. As recently as 2002, in the Gujarat state, up to 1500 Muslims have been murdered after Hindu incited riots. Add to that pressure cooker, the perception that western powers are aiding in the widespread discrimination against Muslims worldwide. It's a volatile stew of historical grievance and modern complaints of injustice.

There are no cures, just treatments.

I disagree this is about sacrifice in the Middle East and true nihilism and marginalization in the West. I don't see this evil empire paradigm. The Islamic State thing is not a vast conspiracy but merely a rallying point like making money and sex are rallying points here. OK there might be more organized on a local level over there, but La Eme (the Mexican Mafia) is probably better vertically integrated than al Qaida.
It is all about people who can't or won't use there emotions and energy to build, but rather destroy. That is nhilism.

And what would you call all of us (wealthy governments, corporations, churches, individuals)who ignore &/ or exploit the 30,000 children who die from poverty EVERY SINGLE DAY? Malnutrition, preventable disease, lack of access to clean drinking water and sanitation are all a part of daily life for the 1 billion human beings who live on less than $1 per day.

He who makes a beast of himself, gets rid of the pain of being a man. Samuel Johnson

Those who don’t have fathers become like wolves
Bobby Fischer

When I read you post about nihilism I thought of these two quotes.

I grew up with no father (not even a picture) and my mom's second husband was a sloppy drunk. I don't think people who come from regular families understand what a chaotic household really feels like.

Is it nature or nurture that makes people do what they do? I dunno.

Drugs and aversion therapy huh? We should be so lucky. Take a look at
RNAi, accelerating change, and the GRIN technologies.

Oh yeah. Nice to meet you professor. My name is David.