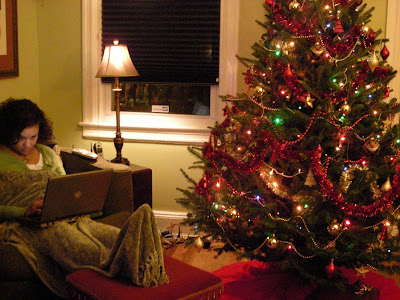 ...or Facebook as metaphor for what's messed up about us all? Yesterday, Nat spoke to his 97 year old grandmother. She's slightly older than the state of Arizona; she's seen, heard, experienced just about anything a person, an African American, a woman, a mother, a wife could in this fatally beautiful American epoch. Somehow the conversation moved to Facebook.
Her take: "Chris, I just don't understand these computers. The computer tells you who your 'friends are?"
Nat: "Well, sort of."
Grandmother: [chuckling] "But it says you are friends with people who want to tell you all about themselves or their people, but don't care truly about you or what your family is doing?"
Nat: "Um...sometimes"
Grandmother: "It will give you friends who just want to sell you something, or boast about things. If they aren't courteous and caring about people all the way, then they will be so on the computer. I don't understand why people want to be friendly at first if they couldn't be bothered or only think of themselves, especially at Christmas, dear."
Nat: "I guess. But they care about their kids, their families and we usually post that."
Grandmother: "Well, Christmas is about caring about more than your own people, and that is what being a friendis , too."
Well, at that point, I didn't want to explain what "un-friending" was. And she was fading out; it'd been a long day for her up in NYC and Westchester. We talked about Oprah at the White House w/the Obamas, we talked about how much we both missed my mother. It dawned then that my gradmother, if she were more sentient, more one of these "tech-savvy geriatrics" younger people smirk over, she still wouldn't be on Facebook. Not because of our need for both detachment and self-promotion, insouciance and faux-warmth. Naw. Because maybe the technology would tempt her to have 2,000 "Friends," and she'd need 26 hours in a day to share & care & at least try to find common ground, as she feels friends should. And that's regardless of whether anyone answers her back, or cares, or shares, or attacks rather than reconciles. Look, she knows the good ole days weren't that great. But there're some things about now that aren't so glorious. This is one of them.
So Happy Holidays. It's about sharing, caring. Umprompted. With nothing expected in return.
Nat Turner
Posted by Christopher Chambers at 10:29 AM

Something to think about beyond the Holidays.

Your grandmother is a wise woman.

What I do not understand is how many fanboys there are on FB who leave wall comments on the most stupid or self-promoting things some people say?

Some of the people of whom your grandma relates wouldn't deign to read this blog post anyway, so you should name names. Until, of course, you start outshining them. These things ebb and flow, and thus so does "Friendship" Facebook style. ;-)

You got any people in mind?