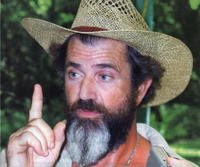 Crazy Mel's opuus about the Maya, Apocalypto, arrives on Friday. And you all know (or you should know) how much I love the Maya. The folks at Amazon where good enough to expose so much of Sympathy for the Devil for your free review (without my permission), so by all means refresh your memory. Of course, true to Braveheart and The Passion of the Christ, Mel dispenses with any historical (or Biblical, as the case may be) accuracy. The implosion of the Lowland kingdoms of Tikal, Palenque and the like took place 200 years before the rise of the Highland cities like Chichen Itza (home of the Temple of Kulkulcan, the Feathered Serpent...not far from Cancun for you Spring Break mavens), and 500 years before the arrival of the Spanish, who hosed everyone. Mel condenses this into a long weekend. He does at least remain true to their very alien-sounding names. Yes, the Maya indeed had names, translated to English, like "Seven Jaguar Moon" and "Rabbit Twelve Rain." I smell a new celebrity baby-naming trend!!!
Now, I used to think Gibson was just a Right wing tool and Jesus freak. However when asked about the themes of the film he likened the human sacrifices the Mayan priest performed (blood blood and more blood; only the Aztecs were more prolific and horrific in that regard) to the Bush Administration feeding our young people to Iraq. He also bemoaned the destruction of the rainforests and the utter impoverishment of the modern Maya and other native Americans. The Maya's math, astronomy and agricultural techniques surpassed anything the Greeks and Romans had in their heyday, not to mention what was going on in funky medieval Europe as it emerged from the Dark Ages following Rome's own disintegration. Yes they even invented zero, and for you racists or morons who are still in line for Playstation 3, that means a lot. It means they calculated all kinds of things to accuracies that rival what we're doing now--from the dimensions and construction of their homes and canals, to how far the center of the Milky Way is from earth. Without zero, this computer and the Internet would not have been possible, or rather, would still be the size of a diesel locomotive if run on Roman numeral code! Yep, half naked brown folks did that at a time when white folks were dumping feces in the street, burning women as witches for a having an orgasm, and blaming headaches on demons living inside your skull. Of course, Mel's a radical Catholic and it is historical fact what the Catholic Church unleashed on native peoples as the Spanish, Portuguese and French conquered the Americas. I don't know how he squares that, but hey, he's Mel!
Therefore, I guess I should just drop the "right wing" and "Jesus" part and keep the "tool" and "freak." Note, he is making a statement in this film about the Maya calendar, which is not only the most accurate until the space age, it interlocks with two more calendars that track the phases of Venus as the morning star, and the rest of the galaxy. Under the chief creation text, the Popul Vuh, the earth as we know it is supposed to come to end on July 23, 2012. That's when the Feathered Serpent returns. They came up with date about 800 years ago. Also Mel says it's no accident that the Yucatan is also the site of the Chixilub (see previous posts) crater, also a Mayan word, the site where a 2 mile wide meteor crashed to earth and began the jacking up of the dinosaurs. Oh well, if Jesus comes back as a big ass snake with wings, you've been warned...

Posted by Christopher Chambers at 3:42 PM

Mel Gibson looks insane in that picture, but I assume he's in is "auteur" persona there.

Shit, Chris, I plan on retiring on October 4, 2017. What am I supposed to do with this feathered serpent slithering around for five or so years. I'm near Chicago right now so perhaps I can look up you know who and get some advice.

BTW, I enjoyed the Passion, but I'm a sick dude who also happens to be Catholic. It was even better when I showed it to my mom on DVD. It threw her into a month's insomnia. That, I offer contrition for.

I think The Nativity will a little more liberal/touchy-feely than Passion.

Gibson says that his assistance to native Americans in this hemisphere is his contrition for the past acts of the Catholic Church. Does this guy have an inflated vision of himself or what?

From the trailer you linked it seems pretty violent.

The subject matter is something that has long deserved exploration, however.

I liked your dig at Europeans. It can't be repeated enough. I think you understate the religious ties, though. This dude has a psycho obession with religious allegory, as well as themes like family, one versus the government and all of that. Picking this "subject matter" was no accident. I also think he is all the way sincere about using this movie as a way to "apologize" for what the Catholic Church did to Indians in Mexico and South America, which is the opposite of one of my girl's favorite movies, "The Mission" with Robert DeNiro and Jeremy Irons, which attacked the Catholic Church.

But I'm off to see "Blood Diamond," bruh. You can have this movie.

I'm in Los Angeles, so I was laughing my ass of at Kenneth Turan's review of the next installment of Bloody Mel's Bloodbath in the LA Times this morning. It's called "The Other Mr. Gore".

Quote: "If ever there was a filmmaker congenitally unable to resist shots of severed heads bouncing, bouncing, bouncing down the side of a steep pyramid, this is the man." "Mel, no one in your entorauge is going to tell you this, but you are not part of the solution, you are part of the problem."

I don't anticipate a lot of kudos about the Mayan cultures contributions to math in this flick. So, snowman, I wouldn't say that the subject has been explored, yet. Just another excuse for a Mel Gibson bloodletting.