"You won't have Mike Nifong to kick around anymore..."

The Duke lacrosse prosecutor is resigning as a ploy to keep from getting his paper yanked. Thank God. What would Fox News, the rabid right wing radio rabble, the blogging buttholes et al have to do if he didn't stick around? How they "wag the dog," or deflect from the real world's, not the cartoon world's, racism, ignorance, white male insouciance? The best thing for them would've been for Nifong, a clown in his own right, to drape himself with the misguided moxie of a Marion Barry, a Bill Jefferson, a Michael Vick (hahaha). You the analogy to the world of black politics, black athletes, rappers: My core loves me no matter what I dirt I do, and indeed they love more, the Mr. Charlie says I'm doing dirt. A win-win for them. But alas not for a middle-aged white dude like Nifong. He can't even sing like Robin Thicke, so the brothas have definitely washed their hands of him.
Speaking of singing, did you see the poor preppies, whining about the unhumanity of it all as they testified before the Bar Committee (and when since did these hearings become OJ Trial televised circuses? Hmm...when it behooves certain folks to claim victimhood as a re-assertion of dominance, perhaps?). Yes dominance. I went to school with younger versions of these kids. The only difference now being that their dads, believe it or not, might have picked up another perspectiveof how the other 90% of the human race lives and is treated. But iwe have a MTV's "Next" WWE Raw and X-box wretched excess culture, our Paris Hilton and Lindsay and any trophy wife as role models for white girls...our ethos that says whatever white males have done or are doing is excused because blacks/lesbians/fags/hispanics blah blah are out there doing dirt/killing people/destroying our "morals"/sapping our manhood/etc. etc. I swear to GOD from what I know here they learned nothing except don't mess with Mr. Charlie's cubs. Do not f**k with us before we get the keys to the kingdom or you will be crushed! And we can count on the same right wing turd machine that our older hero, George W. Bush, can summon when he needs help.
Oh they learned a lesson, all right. Don't you dare turn them into "Sherman McCoy" from Bonfire of the Vanities. Don't you dare! 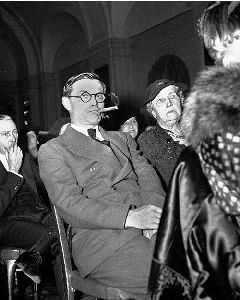 In the meantime, true to form, as Glenarlow Wilson rots--and no one seems to be questioning the ethics of the prosecutor in that case, Congressman Walter Jones (R NC) wants the so-called Justice Department (I was in the Justice Department. What Gonzales is running now is an oxymoron) to do a civil rights investigation as if this is the Schwerner-Chaney-Goodman murder in Mississippi in '64! Makes perfect sense...our young middle class white youth. At risk, under siege. I shudder.
Interesting counterpoint--more so than the Glenarlow Wilson case, emerged two days agao...after SIXTY YEARS. MONROE, Ga. – Newly released files from the lynching of two black couples more than 60 years ago contain a disturbing revelation: The FBI investigated suspicions that a three-term governor of Georgia sanctioned the killings to sway rural white voters during a tough election campaign.
The 3,725 pages obtained by The Associated Press under the Freedom of Information Act don’t make conclusions about the still-unsolved killings at Moore’s Ford Bridge. But they raise the possibility that Eugene Talmadge’s politics might have been a factor when a white mob dragged the four from a car, tied them to a tree and opened fire.
“I’m not surprised. … Historians over the years have concluded the violently racist tone of his 1946 campaign may have been indirectly responsible for the violence that came at Moore’s Ford,” said Robert Pratt, a University of Georgia history professor who has studied the case. “It’s fair to say he’s one of the most virulently racist governors the state has ever had.”
Gee whiz...ya think the living relatives of these two couples, out on a double date, can count on the pro bono services of Reade Seligman's barrister to sort out justice here crushing the equally evil and pernicious Mike Nifong? Let us pray. Let us praaaaaaaaaay!
Posted by Christopher Chambers at 11:17 AM

Wow! Although you have overstated A LOT, you articulated much of what A LOT of us have been thinking to ourselves, too.

Did you know the bridge in Savannah is the Talmadge Bridge?

PS Looking forward to interviews with Cora Daniels, Blair Underwood and Tananarive Due/her husband. Lisa Johnson as well. I think there may have been a question on this but will it be interactive?