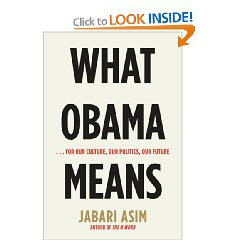 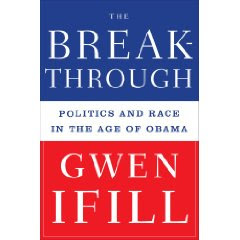 Who said "Journalism is history's first draft?" Was it my boy Mencken? Oh well, here is history's first cut, by two journalists. Remember them--journalists? Real journalists...not pundits, blowhard "commentators," talk show clowns. Writer, Former Washington Post Bookworld editor, NAACP Crisis editor and now professor Jabari Asim offers What Obama Means. If Gwen Ifill were white and around in the late 60s she'd be called a "dean:" like Spivak, Chancellor, Smith, Severeid, Shore, Brinkley. Nuff said. I'm not cheezing here. This is Gwen. Her book is Breakthrough.
Now, if you recall, before the vice-presidential debates came the demand that Gwen be removed as moderator. This was from a slew of the same deranged wingnuts who were slapped down by Barack and Rahm the Terrible this week. How ironic. And allegorical. Maybe they had gwen confused with Donna Brazile? For Gwen's using the news and facts adduced through real journalism to frame the new paradigm of national politics Barack espouses. Yes, patriotism and progressivism. Jabari, on the other hand, offers a thesis controlling the internal transformative forces: what this means for "us folk" within the general polity. Yes, there's overlap here, even in use of primary source material. So? I'll posit that the distguishing contrast between the two works appears to be this global versus local view. Gwen shows the new paradigm for America using Barack as the vehicle; Jabari shows the new paradigm for black people and the changing nature of power, powerlessness and politics. The comparison: both are masterful, objective--something even the wingnuts should take a look at should they decided to build rather than urinate. Of course I think the authors should have gone a further in fleshing out the cultural aspect (you know I say culture affects crime, politics, education)...it's time Barack mounts the bully pulpit to denounce all bamma-dom and ghettofabulousness. That's my only criticism. But alas that's sociology, not history. Hopefully someone can build on this wonderful first cut and add this culture dimension as history settles itself.
Check back, fanboys & girls, for I hope to include interviews with the authors. In the meantime, buy the books. Give me your thoughts.
Posted by Christopher Chambers at 2:24 PM

Hey, I apologize for my brother's hijacking of my identity.

I plan on picking up BOTH books!

Did you interview Kevin Merida on his Obama book?

Did you see Theo Lippman's review in the NYTimes?

"If there were a Pulitzer Prize for name dropping, Jamari Asim’s short new work of cultural commentary, What Obama Means … For Our Culture, Our Politics, Our Future, would win it. I mean that as a compliment. “What Obama Means” is loaded with a cast of characters that stretches from Thomas Jefferson to Malcolm X and beyond, all part of Asim’s attempt to understand the societal transformation that led to the election of America’s first African-American president."

Does anyone have any true criticism of either of these books? Thanks for at least mentioning the lack of the culture angle...

)...it's time Barack mounts the bully pulpit to denounce all bamma-dom and ghettofabulousness.

what do you mean by this?

do you know what kind of hell this would raise up?

I'm dead serious on the pulpit. Much of what exacerbates--or even causes--our specific problems is rooted in attitude, culture, knuckleheadedness, misplaced or non existent priorities. Channeling Bill Cosby not only would be therapeutic, but, based on both Asim and Ifill's theses, wouldn't it cement the white majority vote even more? ;-)

I had been meaning to look for Mr. Asim's new one. I own the N-Word. Very insightful and I expect his latest will be even better.

Mr. Asim is also an academic? Where?

I hadn't seen Gwen Ifill's book but I will look for it as well. Thank you for the news.

I can't afford both so which do you suggest to order first?