Virginia Tech: The only place where Asian nerds are scarier than young black males? 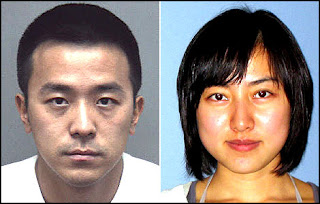 Okay, so Michael Vick went to Virginia Tech. But he's not Sueng-Hui Cho. Vick was a monster for what happened to those Pits, but he didn't gun down 33 people. Lord I'd rather walk naked down Nannie Burroughs Ave NE in the District, or anywhere in West Baltimore, then sit in a cafeteria or walk to my dorm out there in Blacksburg. It's a dangerous place. Xin Yang, a pretty 22 year old grad student from Beijing--literally right off the plane, first semester in the US 0f A, this place where marauding negroes supposedly menance the good and pure on a daily basis--must have been full of such hope, awe at her new home. New President. New fallen snow in the Blue Ridge. But a fellow Chinese grad student named Haiyang Zhu decided to cut off her head in a student cafe. Nope, wasn't a Vick-esque gangsta-wannabe bama from Portsmouth or Richmond. It was an Asian nerd. Is there an Angry Asian Male Syndrome? Universities are happy to fill dwindling grad ranks (and coffers) with folks. How about some kids from the hood? Now, they don't pay cash compliments of advantageous foreign exchange and balances of trade, but at least they don't kill people.
I'm being Swiftian here, not bigoted (in case you had to be prompted). So hit me with your views.
Posted by Christopher Chambers at 10:07 PM

Apparently the college police found him holding her severed head. This begs the matter with the shooting as to who counsels or screens students?

I'm just glad UVa has much tighter admissions than Tech.......

Generalization is Lazy and dangerous.


Remember the Japanese cannibal [student in Paris]?
He was a brilliant student, but also a dangerous sociopath.

I suspect as with the majority of afro-americans you see chinese as enemy, which is SAD!

Swiftian disclaimers don't wipe away the air of mean-spiritness I sense here, Mr. Nat Turner. I think an expose on mental health issues in Asian cultures followed by discourse would have been much more engaging than this snark.

However the satire isn't lost on me with respect to how African Americans are perceived in general or as students (or indeed, as student athletes like Vick?).

Vick only allowed some dogs to be killed. These guys killed HUMANS!!

I've actually never thought of this angle to that story. Its very true though, Asian guys will never be portrayed as negatively in the press as young blacks will. No matter how many positve young black men there are out there, they'll always get outshined in the press by negative blacks. Also, I can remember people getting shot on campus at Norfolk State (an HBC) and there was no national story, no speech from Bush, no donation from musicians and pro athletes. Go Obama though!

Professor: In the good old days the mentally imbalanced at college would do US all a favor and take a header from the top of the local physics tower....

Now they also seem driven to make a statement and bring meaning to their lives (and deaths) by killing others... O how I miss the good ole days...

As for charges against Professor Nat of being “mean spirited”, a "generalizer" and worst of all "snarky" - Hell that's what Professor Nat is all about! “Speaking the plain truth can sound “mean-spirited” and generalizations are not a problem unless people are so daft as to confuse the words; “some”, “many”, or even “most” with the words ALL or EVERY….

Entertainment WITH insight is a wonderful thing!

As long as you remain an equal opportunity snarkist and generalizer I say don't change a thing about who & what you are!

As for bad behaving Asian youth not getting the same amount negative press as bad behaving Black youth... Maybe it's because MOST of their communities doesm’t glorify of hold such behavior in high regard? Every Asian I’ve known talked about avoiding the shame (and accompanying ass-whooping) that would come with doing anything to disrespect their family and themselves...

This is a generalization:
"I suspect as with the majority of afro-americans you see chinese as enemy, which is SAD!"

Asians are mostly perceived to be better students or workers than black people especially black males. This is the case even when they fuck up. I have been in a position to clean up their mistakes in the work place and even take the flack for it. It is more than one instance have I seen deference given to Asians, although you may consider this a generalization. Of course it would be automatically assumed if any black male from a certain neighborhood, whether hoodlum or not would be a menace and less qualified than an Asian. One knows this from language from whites in their expectations and stereotyping of Asians. It is racist, but it does give them a leg up.

Maybe it was the diet of dog and cats that did it. I'm willing to bet if they ate chitlins or dare I say fried chicken...none of this would happen.

Good God! What is going on at VA TECH?! What are they doing to the Asian student population there? This is getting ridiculous? What's next, some kid fresh off the plane getting killed by a guy with a chainsaw, thinking he's in Gears of War 2?


… Then what are the sins of Asian males?

Of being maybe academically the most well prepared ethic group in the USA?

Japan has one of the lowest, if not the lowest crime statistic on earth, but has the horrid ones also.

This post mirrors the ignorance of afro-americans and USA [the majority of its citizens] narrow view regarding cultures outside the mainstream media and outside USA.

Yeah, I'll stick pick hang around the Asians than the Blacks.

You MIGHT get knifed or shot by a random crazy Asian. But the Black guy doing that to you is 75%.

Unknown said...
This comment has been removed by the author.
7:29 AM

It is not my first time to go to see this web ρage, i am browsing this ωeb sitе dailly and gеt fastiԁious informatiοn from
heгe evеryday.