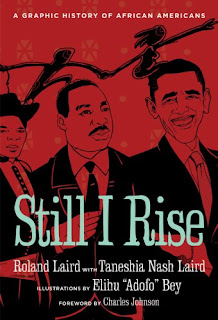 A recent gimmick by big publishers peddling their big brand name authors is spatula-ing them into graphic novels. That worked for a time; now even those sales are slipping. The new trend is "nonfiction" comics and graphic novels: biographies, biopics, historical events, sports or pop stars immortalized in black and white or 4-color sequential art. Folks like yours truly are getting tapped to quickly produce the African American version of this fad before it, too, passes in the minds of the publishing bigshots. But two writers were way ahead of--and way above-- the gimmicks long ago...
...for, yes, in 1997 authors Roland and Taneshia Laird published the first edition of a wonderful graphic history. In time for Black History being made on 11/4/08 and Black History Month, 2009, the Lairds updated the book with the contributions of illustrator Elihu "Adofo" Bey (artist on the first edition). The cover should be a hint.

Still I Rise: A Graphic History of African Americans (Sterling 2009, republished from 1997 edition) traces, through two recurring avatars and vivid black and white panels, the social, legal, diplomatic and economic history of the United States. Yep, from grousing white indentured servants on the Virginia Tidewater, 1618, to the night of November 4, 2008. Note I said the United States, not black people. For even items such as the seizure of Florida in 1819, to the Mexican War in 1846 to the Recession of the mid 1970s--all were implicated and reflected and influenced--even caused--by the journey of African Americans. America as metaphor for black folks; our pain and rise, as allegory for America.
Sounds ambitious? Well, the Laird's pull it off in elemental images and script. Sure, both the words and illustrations read and appear a little amateurish. Perhaps that's the method to the madness. When Historian Joel Augustus (J.A.) Rogers did the same thing 70 years ago in Your History (which first appeared in serial form in the black newspaper The Pittsburgh Courier), the artwork and narrative weren't meant to be slick or professorial. It was meant to talk to us. If the facts are well-researched and the themes sound, such is all that's necessary for the work to move, to educate. And like Rogers' pioneering piece, Still I Rise is not trivia-question, George Washington Carver-peanut banality (of course, Carver invented the chemical processes which grew modern multinational agribusiness, irony being that the first black president of the United States has earmarked agribusiness as one of the bigshot sectors no longer on Uncle Sam's teet). No, this is a moving survey of history.
On the other hand, the "look" of the panels and the tone of the narrative might not tickle everyone's fancy. And we aren't talking about deep analysis. Likewise, august author Charles Johnson's Foreword seems to chronicle blacks in comics (more accurately, comic strips) from the late 19th through the 20 centuries, rather than address the pinpoint angle of illustrated black history. Indeed he doesn't mentionl JA Rogers. Digression: I'm glad he mentions George Herriman's "Ignatz and Krazy Kat." Note in The Darker Mask's Dedication, Gary Phillips and I gave a shout out to Iggie and Krazy as society's first interracial couple (Krazy and Ignatz were a lovey-dovey cat and a mean little mouse)! Herriman drew the strip at a time when real people would've been killed for such sexual tension.

These are minor gripes. Tackling the history of this nation from 1618 to three months ago isn't easy. The topics are complex, emotion-laden. The Lairds and illustrator Bey have given us--all Americans--an enduring standard to meet, not merely as a teaching tool, but in sequential art storytelling.
Still I Rise. Buy it. Enjoy it with your above middle-school age kids. Share it with any white folks who may need a different angle on the tale of this place we call home.


P.S., here is author Roland Laird's take on the latest addition to the book, Barack Obama:

"A Black man demonstrating excellence on a daily basis, in the highest office in the land, will bolster our ambitions; and equally important, it will soften the stereotypes of black people that still infect much of American society."
Posted by Christopher Chambers at 12:27 PM

Cool! Will look for this even though dude at store said the artwork was sketchy. But if you liked it, I'll buy it.

C-sign on the wonderful book. I disagree about middle school students liking this however. I think some of the concepts might be too advanced for someone under twelve years old, especially given the curricula these days! The artwork and production value seems basic but you are right about the message. I would recommend this book to people who have typically ignored the huge graphic novel and comic book genre.

Link on amazon wasn't working. I can order it through other sites because the dummy at Borders had not idea what this book was about. If it was a Chocolate ThugBitch Supahead book, the little blonde girl could have shown me right to the black books section, which includes Langston Hughes AND Charles Johnson thrown in! I hope books like Still I Rise, along with Barack's influence, changes this travesty.

It's strikes me as silly that, even after the Election of '08, the media only present books like these in February. You are right. The black experience is metaphor.

Honest review, Nat. Thank you for the heads up.

saw this super hot picture... check it out

i'm new... anticipation to brief around more time after time!

Hеy I κnοw thіs is οff topіс but I wаs
wonԁerіng if you κnew of anу wіdgеts I соulԁ add tο my blog that automaticаlly tweet my newest twіttеr updates.
I've been looking for a plug-in like this for quite some time and was hoping maybe you would have some experience with something like this. Please let me know if you run into anything. I truly enjoy reading your blog and I look forward to your new updates.