Killefer, Gaithner and other tax "hiccups" 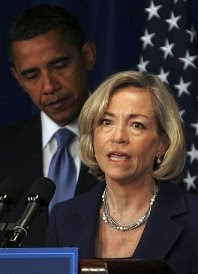 I don't include Daschle here because his colleagues on both sides of the aisle pull this shit all the time and he doesn't fit my thesis. Hahaha. Now, how Hillary slides through without a ripple should be testament that this stuff is all political bull (of course it has no bearing on the job...indeed, the reason this stuff surfaces aside from a slow news day is that the opposition FEARS the person will do their job too well...hence Hillary and yes Gaithner skate, others don't? Hmmm. ...what fate will befall the Labor Secretary?)
I think I have a solution to the tempest in the toilet bowl. I think Democrats should act like Republicans. Hear me out. The biggest problems seems to stem from noblesse oblige left leaning or moderate power couples and dual track intellectuals hiring folk to clean their houses and watch their kids. The Killefers (click here of NPR update) are a great metaphor. Had they been Republicans, the deal would have been to have frightened illegal immigrants do the work. Referred or provided by the some shadowy friend of the friend. Somebody who used to be in the military or big business, preferably. Democrats often don't have that sector pedigree; yes more than you'd think come rom big BIG business, but the unifying factor appears to be a sociological thread: they want the slave labor yet conduct the relationship scientifically, as if a consulting project, and with "fairness," as if they are truly in an enlightened employer-employee/mentee tip.
Republicans don't do this. They pay under the table. Way under. You are the nanny and housekeeper and you'll be dumped if you slack or open your mouth. Or, somebody got the money from from ill-gotten, illegit gains to pay a legit cleaning/nanny/chaffeur service. Or the defense contractors or petroleum tools for whom one lobbies take care of it. With a wink. And there're cadres of folk covering for one another in these circles. Hell, Democrats whine and jabber and get the hateration on when someone finds the perfect au pair. Then somebody leaks it to the media and boom--Barack's got another superstar derailed. But during both Bush Sr and W's tenure, oh it was a tight ship. I've seen it here first hand, folks, among the people who profess to be allies of salt of the earth Joe the Plumper types. I've even helped cover it. {Look for me to be assassinatedsoon, fanboys and girls...}
Anyhow, you could move grandma or auntie so and so in to take care of this (now of course this is a long standing African American and Afro-Caribbean rather than a Republican solution to child care and domestic engineering...see, e.g., the White House).
Or, best of all--women keep you asses home. This GOP methodology takes advantage of being June Cleaver or a redneck Army wife or Real Housewive of Orange Co. and keeps at least one member of the couple in the domestic mix, the other in some nominal control. Of course the flip side is that you're found out anyway, or you have freak outs or other behavior that cannot be kept quiet despite the full effort of the whole West Wing, the VP and the Gonzalez DOJ...oops, I did it again. think "Betty Draper" on Mad Men, or Kate Winslet in Revolutionary Road as fiction examples.
Of course, there's an alternative. Simpler, non partisan. Handle your business! Then the opposition's only course is to confront you for the real reasons they fear. Novel idea, eh?
Posted by Christopher Chambers at 12:56 PM

People who want power should heed the Handle Your Business part.

The functionaries rising in either party, or liberal or conservative, may cause the problems in two different ways, yet the result always seems to be the same! But it's funny how Republicans don't get snagged as much on this. You may be right about how the "pedigree" and other "culture" items might explain this. Maybe the answer is very left wing--better child care options for working mothers? I'm a "conservative" and even I see the need for this solution on a macro level beyond what some businesses are offering (and now cutting back upon).

Ahhhhhhhhhhh...giving false statements to vetting people for your old friends, huh? How many of these so-called patriots were really boning sheep? I have an idea who these people were, but their GOP sponsored would have covered anyway. That doesn't absove YOU, however!

There's a piece in the Nation.com called "Don't Cry for Daschle" and urging Obama to give up this bipartisan stuff.

You get the impression Barack's ruffled but not bowed by all of this? I think he's got his eyes on the prize and this is just ancillary trial and error.

The trouble is that the GOP is not your loyal opposition and I don't think they're interested in governing more than messing him up. They are going to show him as DW Griffith showed the Reconstruction governments of baboonish black men, mulattoes and carpetbaggers.

Hey, i noticed you are getting blog spammed and wanted to let you know that you should enable comment notifications, or add captchas to your comment form.

google "gfutfy" and find your blog.. there is probably more of it