Jews. What would Yahweh do? 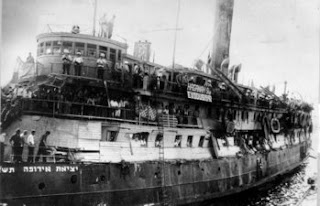 To the left is the ship Exodus. It secreted illegal Jewish aliens (refugees in other words) into what was Palestine, 1947. The British, given a mandate to run the region by the UN, captured the ship smuggling these people, all victims of the Holocaust. They were not allowed into Palestine. They'd initially been interned in camps in Cyprus and there was an offer to settle them any other place but a simmering Palestine. And let's not forget the first people to conduct acts of terrorism in the Middle East were the Hagenah and Urgun and Stern Gang. Jewish groups in Palestine, bombing and shooting folks (civilians, Arabs, British soldiers). Look, what's done is done, but don't turn around later and tell me chickenshit is chicken salad. Hats off to brother Ralph Bunche for having the balls to get involved in this mess; next time Jews whine about black people around the world, theyneed to recall that a black man pretty much birthed Israel as we know it. But that's another bit of hypocrisy for them to swallow, this state of plucky survivors who always claimed the high moral ground. Well what little they had going for them as we enter the 8th year of a new century, in this sea of hostility for which they've dragged us, is now gone. All I'll say beyond that is: only two ethnic groups out there seemed bound and determined to reinforce any and every nasty stereotype out there about them-- us black folk and Jews. From LilJohn and Jesse to Ari Gold on "Entourage," the neo-cons and the Israeli government. We just can't help ourselves, eh? So check this out (and note the utterly nonsensical quote from the clown from the Weisenthal Centre; think hard about it):

JERUSALEM - Israel said Sunday it will no longer allow refugees from Darfur to stay after they sneak across the border from Egypt, drawing criticism from those who say the Jewish state is morally obliged to offer sanctuary to people fleeing mass murder.
Israel has been grappling for months over how to deal with the swelling numbers of Africans, including some from Darfur, who have been crossing the porous desert border.
The number of migrants has shot up to as many as 50 a day, according to the U.N. High Commissioner for Refugees, apparently as word of job opportunities in Israel has spread. The rise has led to concerns that the country could face a flood of African refugees if it doesn't take a harsher stand on asylum seekers.
But Israel has not turned back refugees from Darfur until now, and last month Prime Minister Ehud Olmert said a limited number would even be allowed to remain in Israel. On Sunday, a government spokesman said all new asylum seekers would be sent back to Egypt, with no exception.
"The policy of returning back anyone who enters Israel illegally will pertain to everyone, including those from Darfur," spokesman David Baker said. He offered no explanation for the change.
Overnight, Israel returned 48 Africans to Egypt. An Israeli government official said Egypt had guaranteed that any Darfur refugees would not be forced to return to Sudan. The official spoke on condition of anonymity because he was not authorized to release that information to the press.
Egyptian Foreign Minister Ahmed Aboul Gheit told reporters Sunday that Egypt would accept the refugees for "very pressing humanitarian reasons" but that this type of transfer "would not be repeated again."
Fighting between pro-government militias and rebels in Darfur has killed more than 200,000 people and displaced 2.5 million since February 2003.
Most of the displaced people remain in Darfur, but the U.N. estimates that 236,000 have fled across the border to neighboring Chad, where they live in camps. Tens of thousands of others have sought sanctuary in Egypt, which is ill-equipped to provide them with jobs and social services.
About 400 of the Darfurians who reached Egypt have driven and trekked through desert sands to cross the unfenced frontier with Israel, according to the refugees' advocates in Israel.
Israel's response to the unexpected arrivals has been mixed. Threats to expel them have clashed with sentiments inspired by the memory of Jews seeking sanctuary from the Nazis before and during World War II and being turned away. Some volunteers have helped migrants find jobs and housing.
Eytan Schwartz, an advocate for Darfur refugees in Israel, objected to any ban on the asylum seekers. "The state of Israel has to show compassion for refugees after the Jewish people was subject to persecution throughout its history," he said.
The Association for Civil Rights in Israel said in a statement that it is, "Israel's moral and legal obligation to accept any refugees or asylum seekers facing life-threatening danger or infringements on their freedom."
But Ephraim Zuroff of the Nazi-hunting Simon Wiesenthal Center said the Jewish people could not be expected to right every wrong just because of its past.
"Israel can't throw open the gates and allow unlimited access for people who are basically economic refugees," Zuroff said.
The Darfurians found sanctuary from the killings in Sudan by fleeing to Egypt, he said, but their arrival in Israel "was motivated primarily by the difficult living conditions and bleak economic prospects in that country."
That the refugees are from Sudan further complicates the matter, because Israeli law denies asylum to anyone from an enemy state. Sudan's Muslim government is hostile to Israel and has no diplomatic ties with the Jewish state.
Although the case of the Darfur refugees is unusual, the late Prime Minister Menachem Begin set a precedent in 1977 when he offered asylum to nearly 400 Vietnamese boat people.
Israel estimates that 2,800 people have entered the country illegally through Egypt's Sinai desert in recent years. Nearly all are from Africa, including 1,160 from Sudan. Many spent months or years in Egypt before entering Israel.
Israel has repeatedly urged Egypt to step up its surveillance of the border to prevent the illegal flow of goods and people. Egypt has responded by beefing up its efforts recently, with almost daily reports of African refugees being arrested before entering Israel.
In July, Egyptian police shot and killed a Sudanese woman who was trying to cross into Israel, the first confirmed death of its kind. And earlier this month, Israeli media reported that Egyptian border guards beat to death two Sudanese men in front of Israeli soldiers. Egypt neither confirmed nor denied the incident.
Posted by Christopher Chambers at 10:15 PM

Seriously though, good food for thought. Interestingly, that "economic" bullshit could be used on any immigrant who escapes genocide in country A, goes into country B where they're still being pissed on but not murdered and the place is poor, and then moves to country C were the economy is better. Um, didn't the Jews wander a lot before heading into Canaan and murdering everyone there? My mistake--I forgot that God promised the land to them. Meaning that resettlement after WW Two in any other region other than Palestine wasn't an option, Mr. Chambers, you fool! That means that no one was smuggling in illegal aliens whose one moral claim was they were victims of the Nazis--they were bringing Jews to the promised land. No one was a terrorist murdering civilians and Limeys--they were "freedom fighters." LOL Chambers, we have to school you.

And yes, the Jews were "economic" immigrants in Egypt after Joseph became Pharoah's boy and said yeah, can my brothers and their families come here to live? The questin is were they indeed slaves in Goshen eventually? The clear evidence is that Egyptian built cities and monuments the same way we do--with seasonal paid gangs of laborers and a corps of engineers and other professionals. Slaves and convicts did the truly awful jobs and were household servants. But some Pharoahs went buck wild with the vanity cities so maybe the Hebrews (in Cecil B DeMille language) were messed with. Regardless, they were still immigrants.

There's enough blame to go around in the Middle East to tag literally everyone.

In Sudan, however, you need only look to (a) the government and (b) the Chinese.

I feel Mr Chambers is right , the 1947 ship aptly name " Exodus " did bring the jews into palestine illegally , so they were illegal immigrants during that time as law dictated. Forget the holy book and the holy land , that is another issue , which brings up the question is zionism and judaism the same thing and then into the question who was the book refferring to during the time it was written ..

Ari Gold. Lawd a walking stereotype if ever there was.

Speaking of stereotypes, what is your take on Mike Vick?

Hey Chris, when did you become a Jew-baiter? Why should Israel, a tiny country surrounded by those who want to destroy it, want to admit refugees from the Sudan? I can see why Christian refugees would want to leave Egypt (look at the Copts and all the luck they've had), but why blame the Jews?

Apparently Indespensible D doesn't understand that everytime Israel plays this "Tiny country" moral superiority card, a bell goes off and they will have to answer that bell, or many many rings as it now stands. They were founded from the same kind of war and hatred, yet they tunr their backs. I'm not even getting to the more specific refugees/illegal alien "hypcrosies" the author Chambers presents for debate. Nonetheless, it was Israel that took great relish in pointing out the hypocrises of the Muslim world regarding the slaughter and atrocities in Sudan even before Darfur, wherein the Arab north was seemingly trying to annihilate the black African south. If a nation makes those gleeful announcements, it had better back them up.

It appears to be part of that almost pathologically-based mentality evident among many leaders in Israel and their neo-con apologists here in the US. Denial or "dissonance" drives it. I suspect for the average Israeli it might be simple racism or a wish to see only European-descended Jews? I don't know. But I do know that Abraham was the first to get the message from God, and Abraham was the source of Islam, Judiasm and Christianity. That being said, it shouldn't matter what religion these people are. They seek protection. I wonder what you would have said in 1947, Indespensible. Sadly, I just may know.

When are Americans going to get off the "comic book" view of the world of good and evil in this world? No nation is utterly ood and no nation (or group) is totally evil.

This was an old posting. Just wanted to say: did you know, sir EUNICE CARTER is now being made into a major play on the east coast and a major film? I wish you luck on your other wonderful projects. I was curious what someone meant she caught hell at Smith. I never heard that before now. Interesting.