The Joker? You're joking... 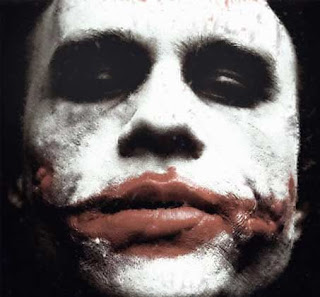 WTF? This is Heath Ledger as Jack Napier, aka the Joker, in the upcoming Batman: The Dark Knight film starring Christian "American Psycho"Bale as the caped crusader. Clearly this ain't your Caesar Romero/Marc Hamill/Jack Nicholson clown prince of crime. This is a goth, scary m-f, and I am soooooo itching to see this movie now!!! Note the "smile" scar--a bit ghoulish. Certainly not the symetrical evil grin on Jack Nicholson...wait, was that make-up or just Jack? Heath sort of resembles a young George W. Bush after a post- rugby game cocaine bender and accompanying gay sex (aka "That Yale thing" hahahaha).

Rumor has it that Bale, who's acted on stage doing Shakespeare since age 8 been in films since age 9 ("Empire of the Sun") can't stand Heath's method acting and general flakiness. Should make for cinema verite in the butt-whipping sequences.

Yes--WTF? They went a little overboard on giving this character an edge, didn't they? There has to be a little campiness to make the movie fun.

You are too funny, taking it back to Bush! That's funny. Or rather, I'd be laughing harder if he wasn't our president.

Yeah, Heath Ledger's gonna make the Joker less silly/cartoonish but all that matters is that whatever happens, Christian Bale will be in full effect on screen.

I wouldn't be surprised if a little drama is going on. Heath probably can't handle being around all that hotness all day long. Ok, I'll stop, but Mr. Chambers, all that Shakespeare mess aside, you gotta admit that Christian Bale is pretty damn fine!

I don't think your 8 year old nephew is going to handle this very well. Nonetheless, I think this version of the Joker fits perfectly with the new Batman genre...truly dark and forboding, as it was intended to be.

I cannot wait to see this movie.

Actually, Liz, Christian Bale himself alluded to "That Yale thing," in American Psycho. Yep...he'd just killed Jared Leto's character and Wllem Dafoe was questioning him about the victim. Bale said "Been going on there for years...cocaine addiction and latent homosexuality--you know, that Yale thing." I immediately thought of you-know-who.

This film is going to be scary for kids, but then again so was the last one. However I think if kids can handle Ghost Rider then they can handle this.

I remember that line in "American Psycho!" How prophetic. In nay case, I think they did go a little overboard, but the producers had to. Its going to take a generation to wipe away the stain of the Batman Returns Tim Burton movie and that nonsense put out by Joel Shumaker with Val Kilmer and George Clooney and...gulp...the current governor of Cali as Mr Freeze.

On my God! This is movie is going to be great! I am not a huge Heath Ledger fan, but he really looks crazy.

Liz -- I totally agree wih you girl. Christian Bale is hot, hot, hot! He is also one of the best actors around.
Great post Chris!

Ah, a quote by Christian Bale's character in American Psycho. I did not know that. Sadly enough, I missed a good 50% of that movie because I just could not handle the gore.

My kids still haven't seen the last one (they're waay too little). They get scared by stuff that's PG. But the old Batman flicks, they've seen them. They laugh at Schwarzenegger as Mr. Freeze. That mess doesn't scare them at all.

I think that Yale thingy is projection and denial on your part!

"That Yale thing"--that's some funny shit.

For real, it's about time they took the Batman brand out of the Reagan-Bush 80s and put in the soon-to-be post-Bush, Jr. grimey ought-eight scary world. Making up Heath Ledger like that is a first step although I'm sure Heath used his own make up.

Bruh you need to blog on the shooting here in Oak-town--editor Chauncey Bailey? It involves your favorite word: "allegory."

I think the phrase was "closet homosexual and doing massive amounts of cocaine...you know, that Yale thing." It's on HBO now. No where near as brutal as the book.

(With some modifications and apologees to any sensitive souls;
I just got back from a mini-vaction to Madison; hung out with this pm w/the Labbies at our ex-patriate n. side bar of circumstance, if not choice; and, finished a fair amount of Spotted Cow beer) Peace and good job setting an interesting topic for conversation. It beats 'Prairie Home Companion'.

Uh oh. Robert feels a bit of a cheap shot about your Yale comments perhaps. Would that W had gone to Princeton, huh cuz?

BronzeBuckaroo said...
This comment has been removed by the author.
2:20 AM

Heath Ledger is pretty cool. He looks like my great-granddad when he was a young man. Honestly! (You do know I mean without the Joker make-up.) So, I know how he will look as an old man.

Anyway, The Batman saga seemed to go down hill after Tim Burton left. Everything became a campy joke afterwards with a succession of pretty boys in the title role. No! No! No! Christian Bale I like. He isn't pretty. Christopher Nolan has restored the dignity to ther series. And, this new Joker appears to have teeth like the comic book.

I guess I can laugh at the in joke you guys find funny since Bret Easton Ellis of American Pycho fame is gay! Yeah, I can laugh too.

Shop now and enjoy not only affordable prices with easy access and easy to use website with supplies like right out your back door. There are Online Only Specials.

So as to prevent injury to your body, taking protein supplements may be a sensible idea for anyone who exercises on a daily basis. It is still necessary to keep consuming your regular amount of protein, or perhaps step it up a little with more eggs for breakfast, however you must still take a protein powder shake, or other supplement, on the day when you're working out.

I anticipate that you will thank for your season of this marvelous read!!! I definately welcome every single bit of it. Thank you for sharing.
stall designer in Jaipur