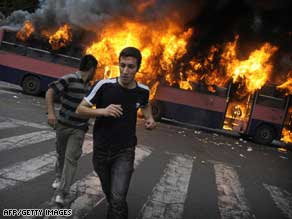 Let's see...entrenched conservative power cadres steal election, question patriotism of opposition and claims God is on its side...props up a puppet moron...primary rank and file supporters are rural hyper-religious sots. Educated voters and young people in the cities are ignored or disenfranchised...
...are you SURE this was IRAN? Sounds oddly familiar, though. Check out the latest here.
Barack's Cairo speech gave respect and hope to regular folk in the Muslim world. Not the mullahs and this bearded scumbag (who actually started off as a moderate). Not the Taliban scoundrels who brainwash nihilistic young men who feel they have nothing to live for, blowing up pieces of Pakistan. Not the sad sick fools in Gaza, or the West Bank, who feel they must match Isreali settlers (ok, who are really American Jewish fanatics) lunacy for lunacy.
Entrenched forces always explode when facing a new paradigm. Note I didn't say "opposition," as in Palestinians versus settlers, Dick Cheney versus Bin Laden, Yankees versus Red Sox. Exchanging one set of idiots for another isn't scary to the powers competing for power, nor does it foment real change in folks' lives. Changing the paradigm does. Frankly I don't think Lenin and Stalin changed anything in Russia. One set of autocrats switch with another. But changing the rules--now that'll get you killed. The usual suspects on the right and the left don't like that, you see. Then we wouldn't need either of them.
Jury's still out on Barack: new face, old story...or new paradigm? In Iran, let's hope they can set a new paradigm. Alas, the hardliners will call them Godless, label them tools of Zionists and the US. Same kind of thing as goes on here. Maybe they need a mantra to steel them. How about "Yes we can."
Posted by Christopher Chambers at 10:37 PM

"Who actually started off as a moderate" - WTF: How long have you been sleeping?

This guy was part of the Iranian student movement that took our American Embassy and staffers hostage - 30 YEARS AGO!

As much as I love reading your efforts to stir the pot, it's times like this you sort of start sounding like a ranting political "Perez Nat" ;)

That said - Keep me laughing, keep me infuriated, & most importantly keep me thinking! :)

I don't know--maybe he meant "ran" as a moderate. I recall seeing something in a major magazine or print magazine's website that he initially thought he could win when he was running for president the first time if he was a moderate, or in a moderate party. But then he either couldn't do it philosophically, or he was a wolf in sheep's clothing all along?

In addition, it was never established that was one of the Embassy students, was it? He says no. Of course, things can be manipulated and perhaps that happened here. George W. Bush got extensive "help" help in reforming is going AWOL from his alternative guard service (and indeed the extent of that guard service). In that, I commend "Perez Nat" for showing that all nations have much more in common than there are differences, and usually that common thread is not always good. (smile)

"Rural hyperreligious sots." BWA HAHAHAHA. That's another mistake. I think you can edit "rural" and just leave the next two words.

Thank you "SnowMan." I should have been clearer. Ahemdinjad, when he first tossed his tagiyah into the ring, sniffed around being a moderate in order to tag more middle class votes. Of course he punted that.

Here's something I wrote on another blog (as commenter): "I have another year for you. 1953. August of that year. Mossaddeq, elected in Iran by the democracy so proudly hail, is deposed by a junta supported by...um...us. The shah's put in charge.
If you want to talk time machines, then you need to go all the way.

The Iranian middle class, the folks tossing rock and starting fires in the streets, appears to have a lot in common with the Blue State townies and cubicle slaves who finally rose up under a "Yes We Can" banner. A lot in common, except victory. Of course, the opposition's the same: entrenched conservatives, religious fanatics and power cadres, supported, rank and file, by poor rural sots. This Iranian middle class, and others like them all over the Muslim world, was Obama's real audience in the Cairo speech. Too bad that there, like here, the wingnut fanatics and trivial fools drown that out. We'll see...

So forget 1956 and 1989. Think 1953...and 2000 in Palm Beach Co. and the so-called federalist/states rights Supreme Court overturning a state's electoral process to get the result it wanted...and 2008, when that skinny negro with the foreign/A-rab name set a new paradigm."

i am from another corner of the world, INDIA, and we have enugh problem over here, so i am not so upto date with current affairs, nor am i so intelluctual as u r man. I have become your FAN and i loved the way you wrote. We have very few like you in our country....lovely post and thnx for the news and details.
iam new to this blogging thing so i need help from the fellow bloggers, i do not write so well, but still i would be honoured if u visit my blog once and advise me what can be doen to make it rocking!!
loved your post and will be back to read more!!!

Hey i've been reading your blog for a while, keep up the good work. Glad you brought Mossadeqq up, if he hadn't been outed then Iran might've looked very different today. I just hope the Obama administration takes a stronger stance on this..Its no good speaking about democracy if they dont have the balls to seriously support it. I know its a tough balancing act, as the US doesn't want to appear meddling, but now is the time to speak up. Those in iran protesting for their rights and the betterment of their country deserve more than our silence

It's a tough call on silence, because if we say anything, Ahmenjinadad will say "Look, the US and Jews are trying to hijack Iran." Ironically that may fit Chambers's theme, because the people who are shouting loudest here are American conservatives and extremist Jews, who, it might be argued, have a vested interest in keeping hardliners in power in Iran (and vice versa). It would only serve to inflame hardline constituency and allow Ahmejinadad to consolidate power.

No, they are not.

"I have another year for you. 1953. August of that year. Mossaddeq, elected in Iran by the democracy so proudly hail, is deposed by a junta supported by...um...us. The shah's put in charge."

The 1953 Mossadeq thing was not a coup. It was a counter-coup. And it followed *years* of trying to work things out with the man diplomatically.

By the by, did you folks know that Mr. Chambers makes a habit of trolling? That blog he cited above (where I'm a regular) is called Tigerhawk, run by an old acquaintance of his. He likes to drop in and make inflammatory, insulting, racist, and generally assinine comments about three times a week just for giggles.

"The alternative is much worse. Ha! I love it. You of this right wing ilk need to fear McCain more than Obama and certainly Hillary. After all, Ike was the one who decided to back the Supreme Court after Brown (and he was the one who appointed Earl Warren). Ike decided that spending on infrastructure, on people, was the future--not feeding, the military-industrial complex. Oops, he, not some goateed Jewish liberal, made up that term. Get the idea? Indeed, it was Ike's sociopathic Vice President who, when he finally did invade the White House, invent affirmative action! John McCain's gonna be your Stalin, folks. And you all are Trotsky, so be afraid...

And Hanson's quote on what--"self identity politics and self congratulation?" Lord can this right wing racist dickweed be even more so? You need a thesaurus to keep up w/the lame code words and other doublespeak you all conjure. You all have been engaging in --"self identity politics and self congratulation" from the jump. Hey, sorry if we're just catching up.

Thought it was a fact worth sharing.

"Dawnfire82" that's pretty funny, calling Nat Turners Revenge racist. I've seen his comments and he's not only legitimately telling you guys off, he's giving you a taste of your medicine, and it is not pleasant, is it? Calling him racist sounds like the people who say doctors, feminists or black people, and President Obama are all somehow responsible for the Dr. Tiller murder and the rampage at the Holocaust Center in Washington.

So please run along. It's adult swim over here until the lifeguard blows the whistle!! (smile)

OMG Lisa@4:35!! Don't push Dawnfire's buttons or else he might come around and shoot us!!

FYI I did some research on this history with Mossadeq and Iran-which my friends will call "Persia"-and I don't think Dawnfire's correct about that, either.

Nice challenges to Nat… Any attempt to stick to arguing ideas and not personalities is quite refreshing although quaint by today’s “Blue State” standards of polite discussion.

Sure CC is intentionally provocative, condescending, and inflammatory; BUT, he has to be in order to “feed the beast” that keeps us readers & ranters on both sides interested. AND, Although Nat plays fast and loose with his language, I am more than certain that he is neither racist nor sexist (but perhaps just a bit elitist)!

It would be about time in our new post racial America that we cut the other side (whatever side) slack for poor choice in words during heated discussion – Just think those on the “other side” might return the favor!

Whaaat the Hell I am thinking? I Think NOT & I Know NOT :)

"Dawnfire82" that's pretty funny, calling Nat Turners Revenge racist. I've seen his comments and he's not only legitimately telling you guys off, he's giving you a taste of your medicine, and it is not pleasant, is it?"

"FYI I did some research on this history with Mossadeq and Iran-which my friends will call "Persia"-and I don't think Dawnfire's correct about that, either."

I absolutely am correct. I'll even give you a reference, since one is within arm's reach. "The Prize: The Epic Quest for Oil, Money, and Power," by Daniel Yergin, Chapter 23: "Old Mossy" and the Struggle for Iran.

BTW, the Shah of Persia renamed the country Iran in 1933, and the Islamic Republic continues to refer to itself as Iran.

"Sure CC is intentionally provocative, condescending, and inflammatory"

No no, you misunderstand. He can write whatever he wants on his own blog, and apparently has his own style that people apparently like. But going abroad and saying insulting things simply to get reactions isn't original or thought provoking - it's juvenile.

Perhaps I should simply return the favor here, to demonstrate how juvenile it really is...