No, it's not Samuel Alito '72, "Judge" Andrew Napolitano '72 and Concerned Alumni of Princeton--the evil robots, that is. It's Megatron & the Fallen (no, not Dick Cheney & crew, either). This week Michael Bay's latest explosion fest erupts onto screens. Fanboys & girls, everyone in the Nat Turner hut is anxious to see this. Not because I'm a Michael Bay fan. No, because marketing hype compells us. Ok, and because of parental peer pressure, curiosity, the need to be dazzled by toys of old...and I want to see the Fallen (voiced by "Candy Man" Tony Todd), and the Constructicons, Tyrese hamming it up ghettofab style, Megan Fox's boobs and butt, the female autobots who transform into motorcyles...whew. It's not high art. Michael Bay would be as lost if he had to do a film with a real plot, real emoting, subtlety, small sets, a script for human adults. But that's not what's all about. So my question is: When will I see my boy Grimlock and Dinobots?
So now Shia LeBoeuf's character is off to college. Guess which? Thanks Miche 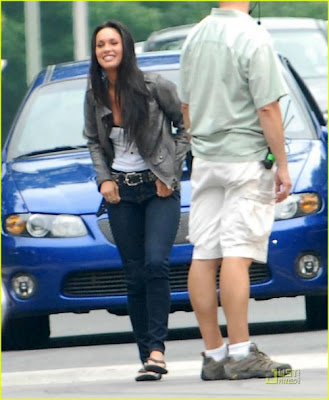 lle Obama '85 & Sonia Sotomayor '76! Notice, then, how Harvard's never in flicks anymore, and Yale's only tapped when someone wants to pillory the Bush family or make some hackneyed reference to a Skull & Bones-based conspiracy theory? Here are some production shots (including one of Megan Fox...for a minute I thought the average Princeton coed was st 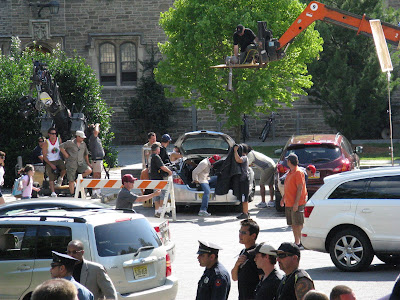 arting to resemble the average Arizona State bimbo...but no, Megan was just admiring the architecture of Holder Hall). I'm anxious to see what happens when the Fallen roll up on poor Shia as he freaks out in a lecture inside McCosh 101. Resembles an old Tiger Inn trees & trolls soiree, doubtless. Mayhem ensues. Word is, Michael Bay shot some scenes at UPenn, then decided to run to a real Ivy (sorry, I couldn't resist) for versimilitude. Neither university offically sanctioned the film, based on his usual creative license (see, e.g., Pearl Harbor).
I pray the Decepticons and the Fallen don't flatten the campus. Annual Giving solicitations are bothersome enough...
Posted by Christopher Chambers at 3:40 PM

Megan Fox is overrated. Nothing personal but what makes her stand out from any of the other "IT" white girls out now??

Sorry to burst your bubble. The filming at Princeton was done officially, and happened well over a year ago. There was no Sotomayor, there was no Obama; at that point, everyone thought we'd have a Pantsuit-wearing Presidentrix.

Princeton is mentioned in no fewer than 238 films; only 24 have been filmed officially on campus. This is one of those.

I thought Randy Speakes' blog, also Aint it Cool News had commented on sources that Princeton and Penn (Penn State?) weren't happy about the characterizations made in the film? Maybe that's what the reference was to.
I think the whole Princeton thing is timing: the Michelle Obama and Sotomayor thing makes the university the "it" place. Perhaps even though the lead time was extremely long.
I cannot imagine any Ivy League school has had positive mentions outnumber negative onesin the mass media/entertainment realm. That is just populism played out for the masses.

Good post, Nat Turner. As a University of Georgia Alumnus, I wish the Decepticons would destroy Bama.

It wasn't very positive in some films, a s

lincolnperry said...
This comment has been removed by the author.
10:39 AM

@Ojo
She looks ethnic for a white girl, I first I thought she was another Paula Patton, a friend told me the racially ambigious white girl is the new thing, go figure!

I talk with a friend that saw the midnite show, she said here comes the protest and the blogs will be heating up shortly, about the latest offense, the trash talking ghetto robots, my only response to her and the white folks is Why, Why, Why...have we not learn from the Jar Jar Binks fiasco!

hey really this is very cool post here.... your blog is very interesting for reading.

It was a excellent movie, I love that sweet girl, Mega Fox is my epic love! I've been thinking a lot, and I think this movie couldn't be better. By the way, I think you're doing an amazing blog and every day I read something interesting through the blog.

This is incredible because the plot is really similar to the old series, I love the way the Autobots achieved to save the planet, and the perfect 3D effects the movie had, actually I've watched the movie at least four times.

For my part everyone ought to glance at it.