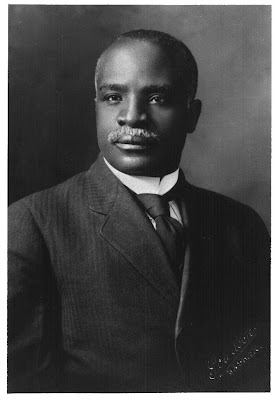 This is the first Kelly Miller Monday. Kelly Miller was a journalist, writer, mathematician, dean of Howard's College of Arts and Sciences, co-editor of The Crisis.
And he laid down some common sense that, perhaps, our wingnut friends and the T-Pain crowd alike, should heed. Every Monday for the rest of the summer, Kelly's gonna lay down some knowledge. Pay attention, and derive what you can for 2009.

To Thomas Dixon, Jr.
…[F] or Southern White men to berate the Negro for failing to gain [as of barely 40 years after slavery and the midst of Jim Crow and terror in the South, de facto segregation and neglect and abuse in the North] the highest rounds of distinction reaches the climax of cruel inconsistency. One is reminded of the barbarous Teutons in Titus Andronicus, who after cutting out the tongue and hacking off the hands of the lovely Lavinia, ghoulishly chided her for not calling for sweet water with which to wash her delicate hands…
(referencing Tom Watson) “The advance made by your race in America is the reflection of the white man’s civilization. Just that and nothing more. The Negro lives in the light of the white man’s civilization and reflects a part of that light.”
Here again we come across the threadbare argument of advocates of suppression and subordination of the Negro. The aptitude of any people for progress is tested by the readiness with which they absorb and assimilate the environment of which they form a part…Civilization is not a spontaneous generation with any race or nation known to history, but the torch is handed from race to race , and from age to age, and gains brilliancy as it goes. The progress made by the Negro has been natural and inevitable . Does Mr. Watson expect the American Negro to invent the alphabet before he learns to read? The Negro has advanced in exactly the same fashion that the white race advances, by taking advantage of all that has gone before. Other men have labored and we all have entered into their labors. The Japanese did not invent the battleship, modern artillery, or the modern manual of arms, but they use them pretty effectively [noting Japan’s burgeoning conflict with Tsarist Russia and it’s conquests in Korea]...
Posted by Christopher Chambers at 10:18 AM

You must have saw the BET Awards last nite!

Wow not one reference to the Us versus Them mentality that’s mentioned way too frequently in America today...

In today's world where every discussion is phrased in terms of race, gender, and class this guy sounds like a heretic.

That ALL people can learn, develop, grow, and progress regardless of color - What a breath of fresh air!

Better be careful Professor with putting out such libertarian provocations – The cult of victimization may come after you for challenging current C. W.!!!

Hathor said...
This comment has been removed by the author.
5:59 PM

Where is the rest of the letter?

Anonymous 4:41pm: you've been watching too much Hannity. Kelly Miller wasn't a libertarian nor would he take kindly to the "cult of victimization" talk generated by obtuse white people/white people in denial. (Ilove these dumbass catch phrases y'all invent to make the average tool feel better--and you tease us for Rev. Al or Jesse's alliterations and weird elocution! lol) Stop thinking that Clarence Thomas is the archetypical African American and you just may get it. ;-)

Stay tuned for more of Dean Miller's words, next Monday.

I love this can't wait for the next post.

KR or AR – I find value in both messengers! So AR came 40 years later and did what… Take the same message and make it more universally known and understood. If KR’s words are to be believed then he would find that some one (anyone) took his message and made something more of it … CC - I’m not trying to cast ANY hostile right or left wing aspersions. Just saying this post does not read like the "usual suspect" apologetic rants you have posted lately.... AND THAT’S A BIG - GOOD FOR YOU!

Nat - Have always liked when you permit your inner right leaning/libertarian/ or dare I say wing nut side come out when you post rants that challenge people to ask & demand more or themselves and not to look for solutions through the charity and/or pity or people(s) or government.

It gives me hope to think you are a more rounded and balanced man of letters then you let on to your many fans. :)

Or is EVERYONE who does not fit the forulatic “archetype” (what ever the hell that means) not worthy of serious consideration for those of us trying to get “IT”?

How about just agreeing that the black “voice” is not a single monotone – It’s a welcome and necessary blending of many voices – Just like the voices of every group. The presence of the "Soprano", "Tenor", "Alto" and "Bass" MUST be part each group’s “song”???:)

The black voice has never been monotone. It is that we don't stand for racist bull and our objections make our listeners tone deaf.