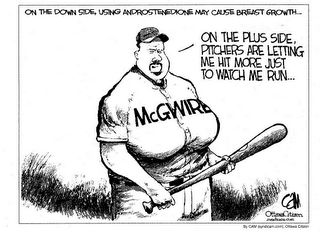 Tony La Russa will defend Mark McGwire until the end: To him, Big Mac is a Hall of Famer. "I've believed in him from day one. I still believe in him," the St. Louis Cardinals manager said Tuesday in a telephone interview with The Associated Press.
McGwire is appearing on the Hall of Fame ballot for the first time, and an AP survey of 125 baseball writers who are eligible to vote, about 20 percent of the total, showed that only one in four who gave an opinion planned to vote for McGwire. La Russa's either deranged from a World Series win that no one gives a crap about, or back on the sauce. If this steroid-popping dickhead gets in the HOF, then baseball is (1) FOS, and (2) racist. You heard me. Big Mac got big by juicing--you can use whatever euphemism you want. Andro? Oh that's just a supplement. Yes, he and Sammy saved baseball that season, and maybe he'll be protected (like Giambi) for that, but should he? At least he took the Fifth, unlike Rafi Palmeiro, who straight up lied, and Sammy, who pretended not to habla English. He's a scumbag, and if he's shown any largesse, then so should the poster villian for all dipshit wimpy white sportwriters, Big Barry. Just a thought.
Posted by Christopher Chambers at 7:39 PM

I got to be first commenter of many no doubt. A rare sports post indeed for you, but many have opined on this topic already. I agree with you. Many others don't, as they feel that Bonds is higher up in the Axis of Evil than Big Mac.

I don't agree with you about La Russa. That was a cheap shot regarding his past alcoholism, but I'm understanding your style. LOL

I got a copy of your first novel and it is very good. I found Ellery Queen Mystery Magazine in the bookstore but they were out of the latest Alfred Hitchcock.

Have a good evening.

I think it's a done deal--against Big Mac. It would send a bad message and be hypocritcal. However I have no doubt that if no one were watching, these writers (limp folk like Mike Lupica) would vote Mac right in and think nothing of excluding Bonds. Someone needs to sort this mess out soon because there are records and other things that will have asterisks.

A non-issue. He won't make it in on this ballot. Maybe in a few years.

Bob Costas says he won't vote for Sosa at all, ever, and won't vote for Mac on the first ballot. Keith Olberman stated that guys like Costas are clowning--what, Sosa doesn't get on because he cheated but didn't break a record?! None of them should get in, and baseball is going to have start measuring old guys who haven't gotten into the Hall in a new light. Jim Rice, for example. Now he's looking pretty good! And pitchers need to be scrutinized.

Let's not dump anger on sportswriters and the media too much. We as fans are as much to blame as they are, because we were cheering and wowing, and shrugged and said this was no big deal when these stories first broke. Then a lot of us did fall back on racism, by making Bonds the symbol when I'd bet there were dozens of players cheating. But the stadiums were filled and owners racked in money and everyone was thrilled. Now we see the rot that was underneath all of this glitter.

I would think you would point out, Mr. Writer, how this is a metaphor for American these past ten or more years. It's even more insidious of a metaphor when you think of all of the people who voted in Democrats in the election who voted for conservative, almost brain dead, Republicans for Congress and of course the Presidency. Have things changed that much, or is the average voter, like the average fan, a moron who can be easily duped?

The sad thing is that these baseball writers are among the most dogmatic "keep the game pure" idiots, and yet they didn;t think it was important enough to break these stories back then? What's even more hypocritical is that they attack Bonds, but then snicker when football players are juiced.

Already checked out Hannibal Rising and 300 movies on imdb.com

Conseco and Caminetti are on the ballot as well.

Baseball is no longer America's Pastime.

Certainly. And I have faced it. Let's discuss this question. Here or in PM. achat levitra It agree, this rather good idea is necessary just by the way

I found this site using [url=http://google.com]google.com[/url] And i want to thank you for your work. You have done really very good site. Great work, great site! Thank you!

When you order Cialis or some other meds in our shop you may be established http://ipod-playlist.com/viagra.html Discount Viagra Pharmacy Online that this product simply of pre-eminent distinction bequeath be delivered to you positively in time.

I'm new members of this site...