Holiday recommendations for real men--the bowl games will be bullshit, the NBA's a joke, the AFC playoffs will provide the only true contests(and were' only talking one or two good games at that, and "Lost" won't be on until February. Y'all might as well read by the firelight, damn it. Expand your mind and lay off the Playstation 3. So, here it goes:
First is "300" a massive graphic novel by Sin City's author, the godlike Frank Miller. This is his take on the bravery and sacrifice of the 300 Spartans under King Leonidas at Thermopalye. 300 men (all bi-sexuals--they were Spartans, after all, replete with the letter "Lambda" on their shields), held off a Persian army of thousands for three days in a mountain pass. Ironically, these faggots likely saved the very Western culture that the right wing preacher types say gays threaten now! The artwork is vivid, often lurid. 180 degrees from the grays and shadows of Sin City. Miller isn't going for historical accuracy; it's a punch in the solar plexus splash of blood, pagentry, nudity, sizzling sex (no gay sex so don't trip; lots of big brown breasts and booties), bronze swords and sweaty brawn. It will be a movie in 2007, shot in the Sin City green-screen style. 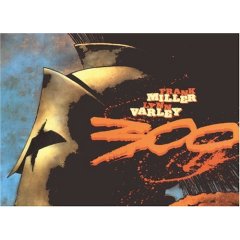 For you crunchy granola espresso shop brothas and whiteboys, Padron Gabriel Garcia Marquez is back with Memories of My Melancholy Whores. Out in paperback November 15; sultry, poetic--don't let your woman dissuade you from the book based on the title. Hey, the title's just the cherry on top, so to speak. Basically, young dude goes to the ho-house to practice before he gets married. He's a virgin and wants a virgin as his rented companion. The girl turns out to be exhausted, bored and sad all the time, and they spend their trysts sleeping and lounging...hey, I made it sound boring but it's funny as hell and anything but ennui-producing.

Finally, my mentor, my idol, Mr. Tom Harris, is back after that crappy Hannibal (the movie was a million times better--you gotta love eating Ray Liotta's brains with shallots, and all that crap with the pigs, plus I've loved Julianne Moore since Boogie Nights). Hannibal Rising, also coming out on film in 2007, expands on chapters in Hannibal and elucidates on the childhood of our favorite meat-eating shrink. Harrowing indeed--his parents were Latvian royalty who were savaged first by Stalin's secret police, then by invading Germans who came as "liberators" in 1941. The family is destroyed during the last horrific death struggle between the Nazi and the Soviet armies in 1944. Young Hannibal survives the carnage and witnesses the death of his baby sister at the hands of starving Russian soldiers. Catch my drift? Made quite an impression on young Hanny. Eventually he's in Baltimore, starting his psychiarty practice after Hopkins Med School, bottle of hot sauce and steak knife in hand. Bravo Tom! Thriller readers and fellow thriller authors will love this triumphant return! 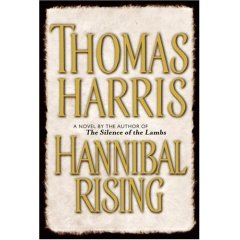 So bruhs, fellas, esais, colleagues, dudes--enjoy the fruit of amazing minds. Hey, where do you think the ideas for all that horsecrap on Playstation comes from? Amazing how brains expand with just a little education; a teen thug at a gamer store melted in wonderment when I schooled him how HALO, along with numerous other games, plus films, TV shows, etc. from the past 30 years all sprung from one of the most important sci fi novels of all time, Robert Heinlein's Starship Troopers (no, not the awful, campy movie version). This was a complex, visceral story and there are complex, visceral stories still to tell, y'all...
Check out my story in ThugLit, volume 10, link to the right or clink the title.
Posted by Christopher Chambers at 10:16 PM

"Memories of My Melacholy Whores?" Are you sure you didn't write that about all of your ex-'s, bruh'man?

My wife, who is Colombian/Puerto Rican, had already ordered a copy of the paperback of Garcia Marquez's novel before the holiday, as she refuses to give up on the hardcover. You must be clairvoyant!

I haven't read any of Thomas Harris' works since Black Sunday a long time ago. The movies are fine.

I recall the original film 300 Spartans with Richard Egan. It's an inspiring story.

I must disagree, Starship Troopers was a fine movie. Just don't relate it to the novel. I especially enjoyed the depiction of a government controlled media.

I can't get to stories on Thuglit on a BlackBerry. Perhaps you cank directly to your piece.

I'm torn on Starship Troopers (the movie). It's like a eating Big Mac when you know you're doctor told you not to do so. The director took the novel and crapped all over it--that's what gets me. Like taking The Great Gatsby and turning it into a hip hop themed movie starrting Jay-Z and Snoop, where Daisy's a big-thighed video vixen and Tom's Jewish record promoter, blah blah.

As for ThugLit, did you click on the links to the right? The online version of the magazine has the stories as pdf files...

Thank you! I will offer these to my boyfriend and brother. I assume "300" is for older teens and above?

Saw the trailers for both "300" and "Hannibal Rising" so I'm wondering why they would release these books now?

Hello there, You have done an incredible job.
I'll definitely digg it and personally recommend to my friends. I am confident they will be benefited from this site.

Feel free to visit my site Workouts to increase Vertical

After I initially left a comment I seem to have clicked on the -Notify me when new comments are added-
checkbox and now whenever a comment is added I recieve 4 emails with the exact same comment.
Is there a way you are able to remove me from that service?
Appreciate it!

When I initially left a comment I appear to have clicked the -Notify me when
new comments are added- checkbox and now each time a comment
is added I get 4 emails with the exact same comment. There has to be an easy method you can remove me from that service?
Cheers!