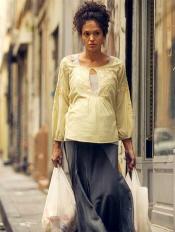 Ambivalence isn't a strong enough word, although it implies two equal forces ripping you in opposite directions. On the one hand, I'm glad there's a film version of murdered journalist Daniel Pearl's life is in pre-production, to be directed by Ed Zwick and financed by Brangelina. It's based on Mariane Pearl's book A Mighty Heart. I'm glad that it shows our so-called "allies" in the war on terror, the lovely gentlemen of the Pakistani securty forces, as the two-faced scum they are, and of course takes a swipe or two at Dubya. But when I look at Angelina in blackface and with a perm (Mariane Pearl's hair is even kinkier that this), I gotta to stop and say w.t.f?

Zoe Saldana, the black actress du jour (as only one or two sistas are allowed to succeed at once, get all the roles until white Hollywood annoints the next one) stated:

"It's a little troubling that considering the difficulty for women of color to get good roles in
Hollywood, they would get a white woman to play a light-skinned black woman.
What's next? They'll just have the geeks create CGI black people?"

Pretty sharp for a Dominican chica from Queens, eh? The punchline is that Angelina was considering Thandie Newton for the role, but, upon "befriending" Mariane, nobly decided to snag top billing for herself.

On the concreteloop.com site a brother emailed that hey, if Alicia Keyes could act, maybe she could pull it off. I doubt it, and rappers/singers displacing trained black actors is part of the damn problem. Don't get me wrong, there are plenty of weightier racial issues in this universe that demand more attention than a white chick playing a black woman (and yes...Mariane Pearl is BLACK. Don't let her Tiger Woods-esque rundown of her racial make up distract you. And when you look at her nose and hair, hell...it ain't even close). But this is an indicia of the marketing culture's trivialization of race. We get a box office white woman to play a black woman because there aren't any black women who'll justify white folks buying tickets. Can't shrink and lighten Queen Latifah. But why not take a risk? The story, the acting is what's supposedly important, or so Brad and Angelina spout, or is this limousine liberal Hollywood horseshit? But hey, it's Brangelina's money paying for the flick. For goddsakes please stop the King family from selling off the rest of MLK's legacy, otherwise David Hasselhof will be shouting "Free at last..." in the next film version!

Look at my boy Forrest Whitaker, who is likely to win an Oscar playing Idi Amin in The Last King of Scotland. Yes, they gave him an extra coat of shoepolish to darken him up, but it was the power, menance, charm of Amin that he channelled, interpreted, exuded. Why not give an unknown black woman the chance to show those skills as Mariane Pearl? Or Thandie, or Zoe or hell give Halle Berry something to do besides whine about not having a man. I suppose if the typical Hollywood clown was doing the Last King, he'd have had Michael Clark Duncan play Amin, or worse, make Brad Pitt gain 100 pounds, grow six inches and spray paint him?

Check out these beautiful women of color: Zoe and Thandie and convince me that Angelina is more attractive or a better actress.
Posted by Christopher Chambers at 4:39 PM

That is crazy! However, I don't think Zoe Saldana is as good an actress as Thandie Newton. All of Thandie's work, including Beseiged and Crash, has been amazing.

PS I will post a comment on your Edward P. Jones interview. I wasn't able make it to Borders but my club has picked All Aunt Hagar's Children for it's December discussion.

The word is that Minne Driver was being considered as well. Could it have been the hair?

The issue here may be that Mariane Pearl is the same sort of self-hating "biracial" person as Tiger Woods. I have met many of those people who become black when it's convenient or exotic to do so. I have heard biracial friends say point-blank that it's an easier life with more opportunity to be an "exotic" white person in America than a light-skinned black person. Indeed Zoe Saldana, in order to get work, has now billed herself as "black AND Latina." In Cuban and Domican culture, no one males that distinction.

This matter, as small as it seems, says a lot about American culture.

Your comments are racist.

Yo Chris, Petey here, Hollywood has forever been on this madness, but people of color have to take over this land in order to have an audience that is ok with people of color. I had a friend years ago named Aki Aleong,
Aki was once Pres. of the Minority Actors Guild (remember the mad scientist in one episode of the Twilight Zone, that was Aki) He is a Jamaican born 1/2 Black and Chinese that could never play a Black man cause he looked Chinese, and he worked real hard to secure ethnic roles for people of color,
and his enthusiam was fueled by the fact that when him and his white wife were looking for houses in fifties hollywood they always thought he was the butler or houseboy
Petey...